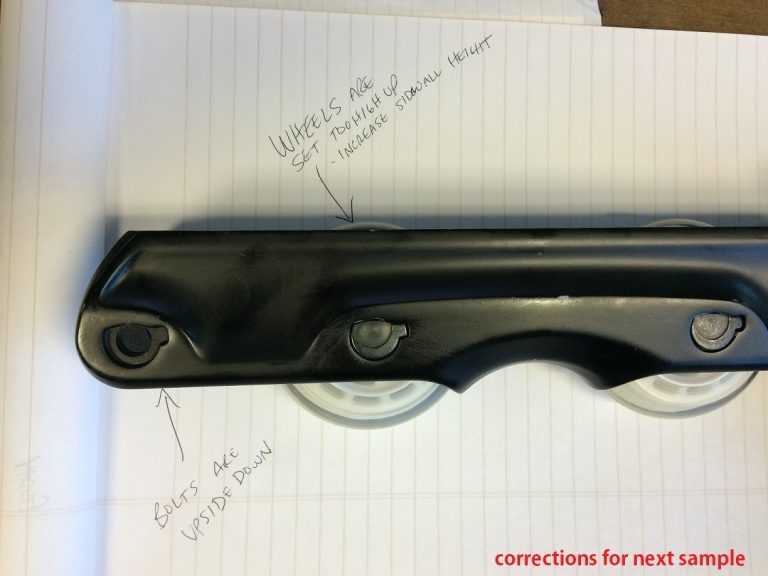 They’ve been out for a few weeks now at your favourite shop, the Ground Control BIG frame. We’ve seen over the past few years that companies are starting to develop new hardware for bigger wheeled setups and we got in touch with Geoff Acers to ask him a few questions about their development and what’s coming in 2015. Hi Geoff, thanks for doing this. Can you tell us when you started to come up with the concept of building a big frame? What influenced this?
It’s been in the mill for a good couple of years now. While we weren’t really into creating another powerblading frame, as it seemed like that part of the market was already covered. The idea of having something that could fit a bigger wheel but provide a decent h-block has been pitched a few times from different riders, most notably Josh Glowicki and Scott Quinn. After some time spent toying around with other big wheel frames on the market, it was decided that we should focus on making something GC specific that grinds super well, allows for larger wheels with a “regular” street wheel base that doesn’t sit too high off the ground or stretch beyond a “normal” wheel base. After a few testers and some quality time spent on them, we feel like the final product is an awesome solution for anyone looking for that big wheel feel and a great street skating frame in one.

What are the new benefits of the frame? What colour technology will they be released in?
We wanted to combine the best of what our frames already had to offer along with a big wheel option. Basically, we stretched out the height of the current Featherlite3 frame, increased the thickness of the sidewalls to strengthen and help with durability, and reformed the h-block to cover a good portion of the middle wheels similar to the concept behind the Generation and Hi-Low frames of days past. So what you get is a mix between the look and function of our FLT3 frame combined with a lowered h-block. Colour technology? Is there any other kind? The first run of the frames will be available in our staple colours – Black, White and Red – along with a new Khaki and a Sky Blue.

What are they called? How did you come up with the name?
We named them the Ground Control BIG frame. We set out to design a frame we could have some fun on, so we weren’t looking to get totally serious about it. We kind of wanted a name that was going to be as enjoyable to say aloud as the frames were to ride. In the process of the putting the finishing touches on the project, Keaton and I were sitting around my house joking around with slogans; stupid shit like, “step up to the BIGs” and “go BIG or go home” and the name just kinda stuck. We were toying with the name “tall boys” but we thought that might make us look like a bunch of trashy, booze hounds… and this is blading, not reality. Heheh.

How long have you been testing them for? Who rode them and what was their feedback from the original samples to the final product? How did their input from the samples go to tweak/change them to the final production frame?
We received the first samples well over a year ago and as with most, they needed some tweaking. After riding them for a bit we decided to push the middle wheels out as far as we could and drop the walls and h-block just a bit more to give the wheels more protection. Not long after that we got in the first functional testers, but even those required some dremelling of the soul frame, as the 72mm wheel sat up to high in the frame…AND the bolt pattern was upside-down, haha. (Photo attached). When those issued were remedied we were onto what became the final product. I tracked down some orange 72mm hockey wheels and boom! I was sold immediately. I had one glorious weekend on them and then reluctantly shipped them off to Glow along with a set for Fred to test out while on their travels. Aside from some issues with how soft the wheels were, the dudes loved them. Actually, if you look closely, you’ll notice that they were both riding them quite a bit in the last edits they’ve put out. From there we added just a bit more plastic to the side walls, eliminating most of the bevelled edges, and decided on which wheel sizes and durometers we wanted to release. Tell us a bit about the new wheel line that you are launching with the new Ground Control frames.
The introduction of the frames will also feature the launch of a new line of wheels from GC. We’ll be making traditional sizes 57mm/90A and 59mm/90A along with the 72mm/88A made specifically for the BIGs. The 72mm is pretty cool as we modelled the shape of the h-block to wrap around the wheel profile perfectly. We have two other sizes in development that should be available in Spring 2015. Here are the Ground Control 72mm/88A wheels with a round profile.

Thanks Geoff and the GC family for their info about the new line. Editor-in-Chief’s Note: Be-Mag would like to share more information about the exciting new team and marketing direction of Ground Control, but unfortunately the team manager didn’t find the time to answer our questions. We will keep you posted.