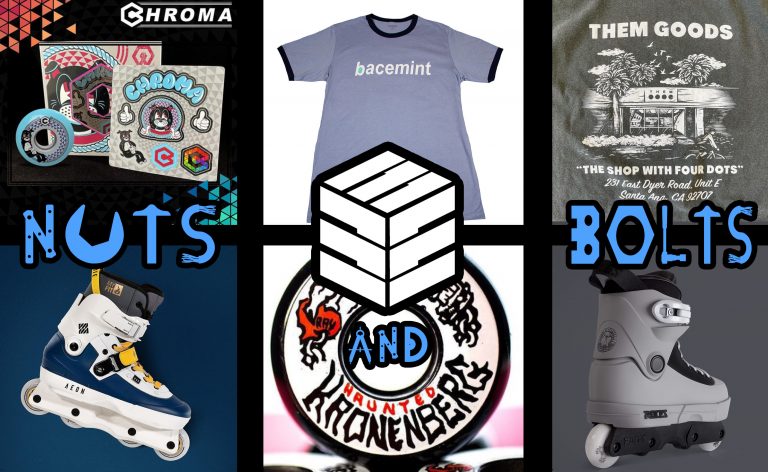 The blading resurgence is in full swing and with all of the rejuvenated energy flying around there also comes with it some incredible new products from some of blading’s longest running and most dedicated brands as well as new brands that are creating ground breaking products to fit all of your blading desires.

So we have decided to highlight some of our industry’s hot new items in our newest feature “Nuts and Bolts”. We will be summarizing the latest products within the blading world and give you a quick and easily digestible source to view the freshest products from all corners of the blading world from the last few weeks.

The Roces Skate company have just dropped some fresh new blades for the winter season with the first being their newest “Domestic Punk” Bobi Spassov pro model M12 skate with one of the most eye catching colorways ever released on a pair of inline skates. Bobi’s new model dares to be bold and vibrant in a time when skate manufacturers tend to play it safe and conservative when it comes to choosing particular hues for their new model skates. It is also great to see the powers at be at Roces have heard the community’s feedback, particularly from their female fans, regarding more colorful and attractive models to match their personal tastes. So kudos to Roces and Bobi for filling a much needed void and making it look so good in the process.

Roces also announced another blade offering with their brand new Fifth Element model for the Japanese steeze machine, Yuto Goto! The new Yuto boots come in a classic smokey grey and black colorway with stock frames and 60mm 93a wheels. An added plus is Roces is taking Mother Earth into consideration by creating all of their colored skates with 47% cornstarch-based plastic as well as using recycled 99% plastic-free skate packaging. The new Yuto boots are looking to ship the end of March so get your pre-orders in now!

The Trigger Skate company made waves with their adding of their first American pro rider, Jeff Dalnas, and Jeff has just released a super sneak peek of his very first signature model from Trigger and the boots are looking rather sweet, as least in the limited view that we can see from them. Jeff states via his IG post that the new boots will be “new and improved for comfort and maneuverability” with developmental insight from Jeff Dalnas himself. So keep your eyes peeled for more news of the Dalnas Trigger boots which should be coming sooner rather than later, hopefully.

2021 looks to be quite eventful for ole Jeff as he not only will be receiving another signature skate, but he also got the good news of him being a Dad soon! So congratulations to Big Daddy Dalnas and good job in passing those super human genetics onto another generation.

The Razors Skate brand have just dropped their newest Loca model in a fresh white and lilac colorway. The Loca was designed by and for the female skaters out there and the new boot has a unique V-Cut cuff that fits their specific anatomical needs and Razors also introduced an additional smaller skate shell sizing (4/5), which was previously unavailable. The new Locas also feature a fresh new matching Reign X Loca Liner, hockey laces, crispy white Ground Control FLT3 frames and stock Razors wheels. The new Locas are in stores as we speak so pick up a pair!

The USD Skate company have just released their newest signature Aeon skate for the high-flying Frenchman, Roman Abrate! After skating the USD VII for five years, Roman wanted to try something new to help him go faster and air higher in the big parks and transitions, so that led to him choosing ultra fast 68mm UC Apex wheels in a Aeon 72mm shell, which using a slightly smaller wheel gives plenty of space to still confidently do your favorite h-block tricks whilst slightly reducing ride height without losing any excess speed. The new Roman’s also feature a unique colorway, an added soft top, a new and improved adjustable cuff, and MyFit 2nd skin liners. The new Roman’s are available in your favorite skateshops now so be sure to pick up a pair before these bad boys sell out! And be sure to peep the awesome new skate promo that Roman made to show off his new beauties!

There has been quite a revival among some blading’s brands from years past and one of those in particular is the Birth Brand, courtesy of inline skating icon, Chris Edwards. For the relaunch of Birth, the Airman has enlisted the assistance of fellow blading legends Jaren Grob, Rachard Johnson and Derek Henderson. And that is not all! The entire Birth team have also brought their offspring along for the ride with their very own signature clothing to match their parents.

The Birth relaunch features a humongous line of gear which includes shirts, caps, hoodies, jackets, mugs as well as youth tees and onesies and even a relaunch of some of their most recognizable shirts from the mid nineties. On top of their soft goods, Chris has also teamed up with the Kaltik brand to create a limited edition 25th anniversary Birth Daytona junior K Skate that comes in a smooth blue colorway reminiscent of Chris’ RB Daytona skate from 1996 as well as a black and white K Skate Thunder edition. The skates features a perfect pairing of Kaltik flat frames and Kaltik 60mm 90a wheels. All royalties from the Birth series skates go to the Chris Edwards Skate Foundation. So support some of blading’s greatest pioneers and head over to www.birthlegend.com to see the full Birth line now.

If you are like us and have been wondering why in the hell there haven’t been more signature products for Chynna Weierstall, who is one of the most consistently innovative female bladers of all time, than today is your lucky day! The good peeps at Chroma have announced her as their newest team rider and have given the legendary bladie her very own signature model in the form of a 58mm 88a baby blue wheel. The wheels are a rounded bullet profile, which are great for skating flat on low profile frames or for added control on any antirocker setup. They have also released a limited new line of T-shirts and hoodies designed by Jeremy Beightol to accompany her wheel as well. So show your support for one of the hardest working and brightest blading talents in the game and pick up Chynna’s new wheel and signature tees which will be dropping at https://www.chromawheels.com/ on Saturday, 1/30/2021, at 9am EST.

On top of receiving her own signature wheel from Chroma, Chynna Weierstall has also been given her own signature clothing courtesy of the Rollerbender brand! Her new line includes a clean looking pro tee and hoodie, as well as some unique jogger pants featuring a sweet Chynna character designed by Chynna’s sister, Savannah. So show your support for one of rollerblading’s best female bladers by copping her fresh new gear, which 100% of the profits go straight to Chynna! Now that is BADASS!!!! Kudos to Rollerbender and congratulations to Ms. Chynna! You can pick up the new Rollerbender line here!

The Haunted Wheel brand has just released a signature wheel for the long haired titan from Tennessee, Ray Kronenberg! Ray’s new wheel is a fitting jet black wheel in a solid 59MM size with a hardness of 92A. Ray also dropped one hell of a promotional video to kick off the release of the new video, which can be seen here. (sorry due to embed restrictions we couldn’t post the video). So show your support for Ray and pick up a set of his rocking new wheel today at Haunted’s site and also your favorite shops.

The Red Eye wheel company have just dropped a brand new black urethane edition of Jon Fromm‘s most recent wheel. The 60MM 90A wheel comes with rounded edges with a bit of flat profile will give you a nice balance and speed. Just like before Fromm will be donating half of the proceeds from the sale of his wheel to the WWF fund which is assisting koalas that were injured by the massive wild fires that devastated Australia last year. That is an incredibly sweet gesture by Jon and we are happy to see more positivity and conscientiousness within our skating community. Great job Jon!

Red Eye also teamed up with Carriers Skate Shop and released a second collaboration wheel in the form of a 60MM 90A wheel with rounded edges with a bit of flat profile, which is the same profile as Jon Fromm’s newest wheel as well. The new Galaxy wheels are available exclusively at Carriers Skate Shop so stop by their impressive store front in Plano Texas or hit them up online at www.carriersskateshop.com/

The Kelso Brothers have just dropped a sneak peak of their newest bacemint line which will be dropping soon on 2.19.21. And to kick off the release of their new line they also dropped a jaw dropping new video titled “Black Hole” to accompany their fresh new gear. The new bacemint lines features some stylish ringer tees, low profile dad caps, comfy fold over beanies, longsleeves, assorted pull over hoodies and a fresh new nylon jacket. They even dropped a clever pair of bacemint socks to round out your fit and keep your little piggies extra warm this holiday season. So be ready with your C.C information in hand on the 19th to copp those sweet new bacemint pieces from www.bacemint.com, because they surely won’t last long!

Them Skates have just dropped some awesome new soft goods & a brand new grey model 908 model skate titled the “CommUnit-E“. The CommunitE project aims to direct a percentage of sales from ThemGoods products back into the skating community and Them have announced the first recipients for their CommunitE funds to go to assist the extremely talented individuals Daniel Ogbogu, Jay Moresh and The Shinobi Blade Clan. The new “CommUnit-E” skates are looking to ship at the end of February, and are now up for pre-order here and also at your favorite skate shops.

Them Skates have also released their newest edition of their collaborative Artist series tees which feature the incredible work of painter Nick Dahlen, who created the unique “Blade Dog” design which is available here. Them has also dropped a collaboration with graphic artist Resuk, who created a vintage looking “Shop with Four Dots” design, reminiscent of the surf culture that is so prevalent within California culture. Them has also released some essential beanies and caps to keep your noggin warm this winter season. So peep the new items from Them here at: themgoods.com/collections/all

If your brand has a hot new item and would like to be featured in the latest edition of “Nuts & Bolts”, please email Kevin.Little@Be-mag.com for all product releases.

We would like to streamline the process of product releases and product news by offering companies the ability to reach out beforehand with pertinent information about the release. Photos/renders of the product, brief summary on the product, names and social media handles involved, release date, possible quotes we can use in the write up. By giving Be-mag staff the heads up, we can add these releases to our editorial calendar, time our news stories with your release dates without rush, and give the community fact-checked information straight from the source.

Any private information about the product will remain confidential until otherwise approved for release. Please title the subject of your email ‘Product Release’.