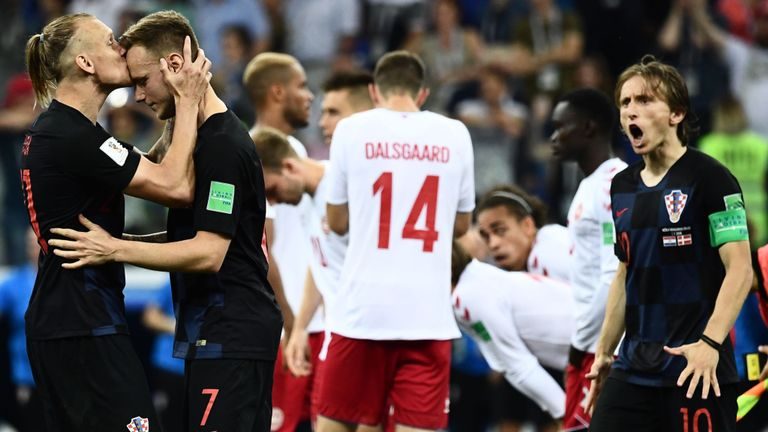 FOR YOUR CONSIDERATION | WE’RE NOT BROTHERS

On Sunday afternoon I was watching the World Cup and saw the final shoot-out between Croatia and Denmark. It was a very tense situation because the goal-keepers had each blocked an inordinate number of shots, and the game was ultimately decided by the very last shot. Croatia won and they get to move on to the next round. #Woot. Anyway after the game, the Croatian team was clearly very churned up by the whole thing and they went around hugging and congratulating each other.

At one point, I saw something that may be common in Croatia, but is far from common where I’m from in the United States. Several players would approach each other and kind of caress the back of the head of their fellows.

Now, I understand that men in the United States are particularly prudish. The handshake is usually the standard form of embrace. Hugs are for close friends or special occasions–maybe like winning a World Cup soccer game, say.

Kissing the cheeks or those other sorts of strange side-of-face “air kisses” is something we don’t do. In our minds, that’s something Europeans do.

The same thing is true for caressing the back of the head during an embrace. We Americans just don’t do that.

Interestingly though, we do something perhaps equally strange, though with a great deal more prudishness and homophobia: we call each other “brother.”

In the Rollerblading World, lots of dudes call the other bladers “brothers.” Talk about “the blade fam” or “blader family” is merely a derivative of this.

NOTE: Woe upon the poor woman whose supposed job it was to birth the 6,000 or so of us (American bladers, that is). Presumably the bladers from other countries have other mothers.

What’s striking about this is the sheer homophobia of it.

The idea of caressing the back of another man’s head during an embrace strikes many of us (Americans) as either “cringey” or outright “gay.”

The problem (as if that in itself weren’t already enough of a problem) is that we take that prudishness a step further and have created this notion of “brotherhood” between ourselves to eschew having to rely on a word like “friend” or “friendship” to describe our relationships with other men.

It’s as if calling someone a “friend” somehow isn’t good enough to describe accurately the close and intimate friendships so many of us have with our blading fellows. Many of us have been arrested together, we’ve slept in cars together, shared drinks, shared (in often unfortunate circumstances) the same sexual partners, and so on.

A lot of people I’ve heard talking about rollerblading actually use war/soldier metaphors to talk about their experiences with other men during the course of our decades of blading–“no one but my brothers knows what I’ve been through,” or “If you weren’t there, you wouldn’t understand.”

The point is, we Americans seem to feel that “friend” isn’t a strong enough word to accurately describe these close friendships with our male friends, and having to plumb the depths of our feelings and create a more descriptive explanation for these relationships is perceived as “too gay” to consider, and so the first, easiest approximation–without having to get mired in those feelings–is to call each other “brothers.”

Well, let me tell you: we aren’t brothers. We’re dudes or we’re men or we’re bladers. If we have a close relationship, we should understand the commitments and nature of our friendships, and we should develop a vocabulary to speak about those things.

Saying that I’m your “brother” doesn’t mean that we’re close. It means that you’re unwilling to think carefully about the nature of our relationship.

This is one of those things that will most likely ring in the ears of some readers, perhaps most especially my American countrymen. For others, this kind of reasoning may appear quite rational.

In either case, I appreciate you taking the time to read this, and, as always, I’d like to thank you for your consideration.