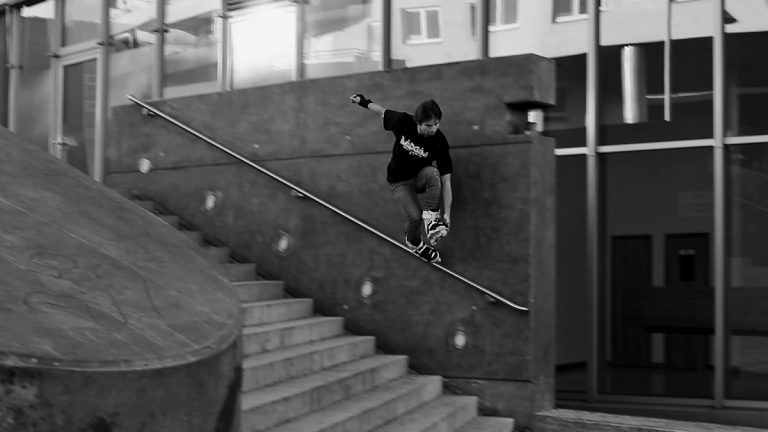 Full Video: We love the streets

German videographer Martin Herber put together a full length video, showcasing some quality German blading, filmed over the period of two years and uploaded on Vimeo for free. He sent us some words about how it all came together and we recommend checking out the video as you might even spot some well known faces in there.

“Usually, one thinks of video projects to be planned right from the start with a fixed list of riders, spots, type of editing and so forth. The whole „We love the streets“ project stands in contrast to that.
In 2012, I originally only planned on filming two profiles for longtime fellow bladers Sven Hausmann and Alex Rudolf, but since I achieved to gather a lot more footage from other bladers as well, the idea of making a whole video arose quickly. I always adored – and still do – the vibe of oldschool skate videos, which showcase nothing but the passion for streetskating without having to follow a certain style, may that be stylewise or musicwise. To show just that was my main focus and it explains the title I chose, as well.
I set the deadline for autumn 2014 and started to approach the idea by contacting pleople who I thought might fit into my concept. „We love the streets“ has its focus on south Germany, but since I recived footage from Jason Adriani from Italy and unused clips from Benjamin Büttner as well, the lineup became more diverse. Additionally, I also recieved footage from the skaters shown in the video. While filming for it, we visited several cities in eastern Germany, like Chemnitz, Leipzig and Dresden, which still have strong scenes. We`ve been to Prague as well, which is an amazing place to skate.
I planned on doing two montage sections, one functions as an opener, too. Alex Rudolf from Nuremberg, Sven Hausmann, Jens Küfner, Simon Jung and myself recived full sections. All those guys are close friends and represent German rollerblading for a long time already. Especially Alex, who`s a father now, put a lot of work into his section. I also want to point out Simon Jung, local blader from Bamberg. He`s really freaking good and never gets the attention which he deserves. Jens from Bayreuth was involved in the project since 2014 and managed to come through with a section, even though he fractured his hand in March. Sven Hausmann from Chemnitz is probably the best thing eastern Germany has to offer at the moment. He`s such a nice dude and can thow serious hammers.
I`m very pleased that I had them on board for this project which basically shows two years of our lives on wheels. Since rollerblading`s declining and only few (or no) kids pick up rollerblades these days, I found it necessary to represent blading as good as I could.”

Martin Herber,
Nuremberg based skater, filmer and editor of „We love the streets“