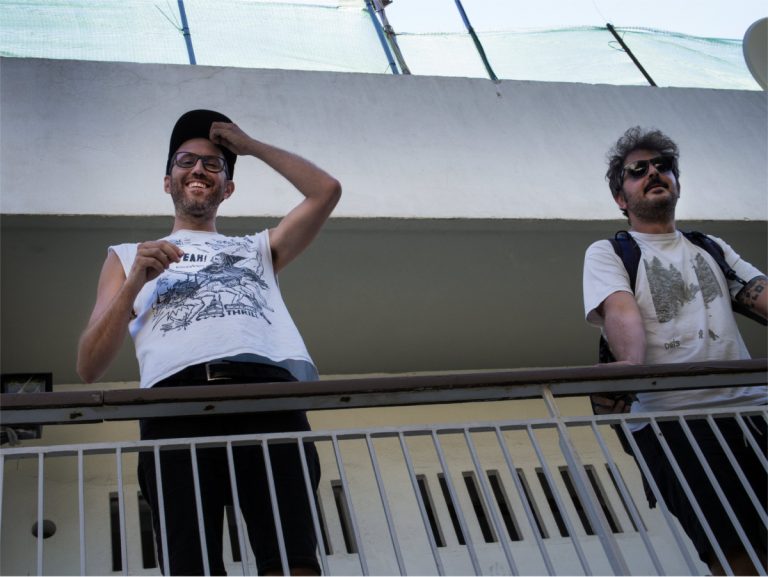 What culminates in the Bladehouse Event and the trip to Andros goes way back. Way back, because Nikos Kouros, an Athenian filmmaker, over years has built up a hub for the Athens blading scene in the house that he lives in. After coming back from studying and working in London he found his hometown scene in a state of lethargy. There were still people skating, but no regular sessions, social gatherings or sense of community. Through the years Kouros has always been the guy writing the text messages to get everyone in one session. He was missed. “I see that everywhere. People always need that one person that takes matters in his hand.” What happens to a scene if this person is missing? “They get distracted by daily life. They need to be reminded of the more important things in life.” Like what? “Like skating.”
Luckily the Athenian bladers were responsive to his wake-up call. The lot of friends became an active crew again. And the Bladehouse became a headquarter. It is not only the place for a rooftop session but also the place to hang out together after the session or skate the miniramp if it’s raining. It’s a place of encounter.
Now some years later, the gravity of this place has reached out. It is hosting gatherings that go way beyond the borders of Athens. In 2016 the Cayenne Project crew united in Kouros’ house to produce an outstanding blade film. ‘Delfon Dio’, it is the address of the Blade House.
I want to set a monument. For the guy who created the most complete and intense event that I know in rollerblading. And for the unity that is created by this event and its surrounding adventures. Imagine 30+ people from all over Europe, with different backgrounds in profession, age and lifestyle going on a trip together. Whilst the idea of a shared European culture is taking huge backward steps on the big stage, it is alive and growing in the community founded over the course of these two intense weeks in the south of Greece.
This is the story of a reminder. One damn effective reminder.


It goes way back, because we start on a Thursday, 9 days before the actual Blade House event, this is not just a contest coverage.
I arrive at ‘Delfon Dio’ after a 10h car ride from Sofia, Bulgaria. We are late for the railbox session that has gone down already. It is a big reunion, many of us have met before, even during this year at blading events, be it in Amsterdam at the Shred Da Ground or the Abriss in Berlin. The sofas are missing in the living room, they have already been transformed into sleeping spots downstairs. The empty space foreshadows the madness that this space will house in just 9 days.
Next morning – As people are still having breakfast, the first car is made fit to leave for the beach trip. Pipi, a local skateboarder and the carpenter behind the Blade House mini ram, is forming the vanguard of this excursion, going to the island of Evia early to find a good spot and set up camp. He shall forever be remembered as the master of trunk-tetris. His girlfriend Vivi, Soeren and myself join him on his mission to Evia island, just a 2h car ride north-east from Athens. The first beach we arrive to is full of people and really windy. Wild camping is obviously not so wild here, everybody is doing it. After brief communication with the headquarters we decide to take a chance for a better suited place and drive to beach #2. This one is wider and has some nice shady spots, which are unfortunately taken. Still we start to build camp in the very end of the beach, next to the rocks where wind and bright sunshine unite. While we struggle to construct the first tent, we see a caravan leaving on the other end of the beach. What it leaves behind is a big space beneath the trees. They afford us shade and hold to the hammocks some people brought along as a sleeping spot. I have never asked you guys: Wasn’t the resine dripping on you all night from the trees? However, we take over the space, the rest of the crew starts dropping in and an hour later we had built a solid base.
I don’t want a spoiler here, but arriving I was asking myself what I will do in this solitary place for the next three days and when we were about to leave, I felt like we just got comfortable with the calmness of the beach life. On the third day a trip to the port town already seems like too much of a distraction. Starting our journey like this works great in two ways. First, it is a much needed time to soak up energy for the upcoming skating and partying that will work to squeeze it out of you. Secondly, you can disenchant from your daily routine. It creates the right setting to get involved with all the new faces surrounding you. After all, there are already 25 boys and girls from 5 different countries. But they have something in common. They share the passion for an activity, that is a very playful one and is not considered to be taken serious by most of society. Rollerblading is something that kids do. These circumstances contain great potential for the quality of meeting each other, there is this childish level of encounter. So even though many are 25+ years old and have only known each other for 24h, they will already be stacked on top of each other on an air mattress to create the world’s largest floating human pile.
The next days are spent in a pleasant laziness, interrupted only by spontaneous downhill sessions (Clip 2 – ) or cruises on the rubber boat, that Pipi brought along with a little outboard motor and a surfboard to skitch on. They were well prepared – Nikos Kouros a.k.a. the Thomas Cook of rollerblading.

Monday – Pipi is packing up the car like a boss again. I am asking him about his relation to the scene and he confesses. He is jealous of the small but tight community that he is experiencing. Pipi is playing in a punk band. A guy with a solid belly that is into all outdoor activities, someone who is good at fishing with a lance. The tattoos spread over his body speak of a more punk, DIY approach to skateboarding that he is missing in today’s scene. In Athens many kids would be more into their online representation than into a skate event happening in their city. There are so many that they don’t feel the urge to support each other. He can’t identify with much of it anymore. “The less people, the better” he says. Is it though? And what about the pants?