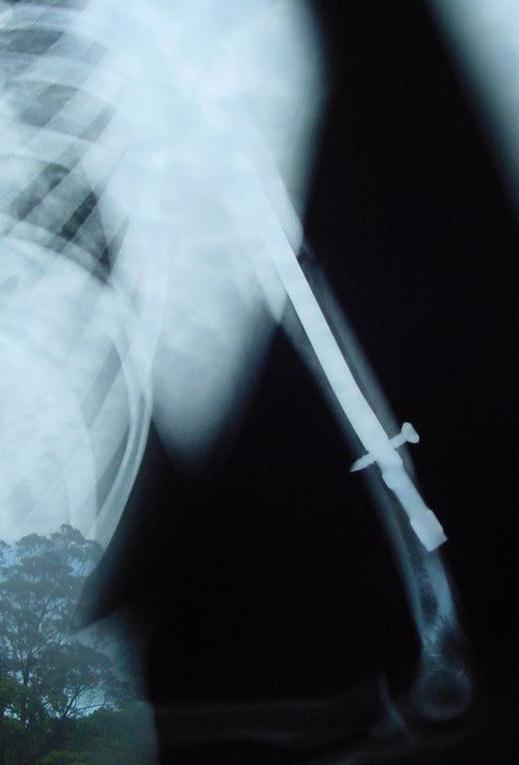 For 10 years from 1995, César Mora was one of the world champions of vert skating, an innovator and role model for our young sport. In this series of articles, we have pulled together rare photos and inside stories about the early years of aggressive skating. At the 2000 X-games in Melbourne, I broke my arm and completely smashed left humerus bone.  I was working out a lot, lifting a lot, drinking protein shakes and eating Oportos a lot, so I was 10 kilos heavier than I had been before. So when it came to skating the big ramp they had there, I found it strange. I was finding it harder to air and harder to spin… and then when I fell backwards on the ramp, I snapped my wrist and my arm. They had to operate on it, and to this day I still have the titanium rod in my arm. But it healed beautifully and has never been a hindrance to me in any way, whether it be in the gym or life in general. Physically I healed pretty quickly, but mentally it took most of that year to gain my confidence, to the point where I would even try a 1080 again. Considering the injuries of other extreme athletes and other sports, I got off pretty lucky. And now, more recently, after all these years, I’ve been confronted with something that actually has put the brakes on me: my hip. Last year I was having trouble sprinting and it wasn’t getting better. That’s when I thought, “Ok hold on, this isn’t right…” I usually heal and move on. After seeing a specialist and getting an MRI, I found out why I was having so much trouble. It turns out that on my right hip, I have a degenerative bone growth which prevents my leg from coming up fully to sit in with my hip joint, and so this bone has been wearing away the cartilage in the socket which has produced arthritis. So if I push it or work it, it will get inflamed and inflammation just blocks everything and reduces my movement. I can still run but just not at top speed, I can bring my left knee to my chest, but I can only get 70% up on my right. I have had to start working out my limitations: what I can and can’t do and how hard I can push and how long I need to rest to recover. That’s what I took up skipping. I also have my bike and I can run up hills and on sand. But unfortunately soccer is what aggravates it the most, and makes it hard to walk properly for the next few days. So I’ll just find new and interesting ways to push my body and keep fit and active while dealing with this problem I’ve been presented with. It sucks and I could go hide under my bed and never come out, or I can work with it and never use it as an excuse to give up.