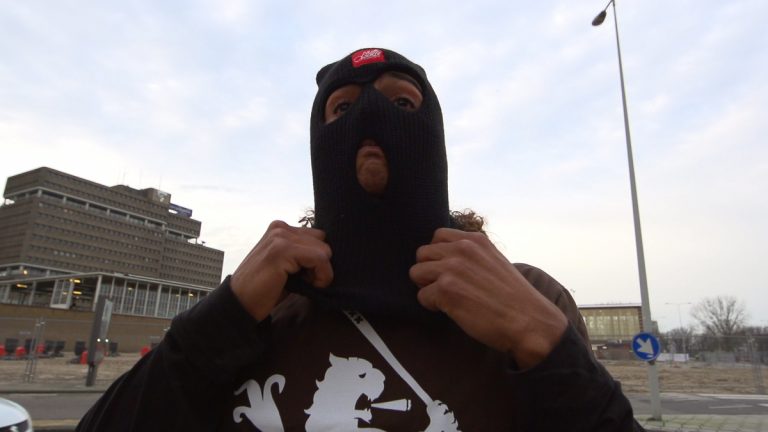 Remy Cadier has been working with the Amsterdam clothing brand Nuff Said for a while now, preparing a section featuring rollerbladers, because of the owner’s affiliation with rollerblading that goes 20 years back. We at Be-Mag have been impatiently waiting for this one to drop, and it’s finally here. Nuff Said is an Amsterdam based brand. People that buy it tend to lean towards the Ajax Amsterdam Hooligan crowd, the Hiphop scene, and ofcourse the graffiti heads of Holland.
The owner found me on facebook through the Cityhopper series, and recognised me from blading together waaaay back in 1997 in the legendary skatepark ‘Third Floor’.
After some chatting back and forth we decided to partner up to do a project involving rollerblading. Unfortunately while we were right in the middle of filming Edwin Wieringh died, who was going to feature prominently in our video. So there’s not a whole lot of Eddie footage, but what is in there are the last tricks he ever did on blades, and have only been seen by a handful of people up,until now.
After that happened filming for the edit took a backseat, and we did some other stuff together in the meanwhile, like this video for Dutch rapper Sepa. One thing we really wanted to get right was the music, since YouTube is getting very strict with what music they will allow now, but also in the future. We’ve seen plenty great skatevideos get purged from YouTube because of copyright claims, so getting the rights to the music you use is not just smart, but also essential to assure it will remain online for as long as YouTube exists.

Fortunately Nuff Said has loads of contacts in the Hiphop scene, and they hooked us up with Shroom (www.producedbyshroom.com) who is a succesfull music producer from Amsterdam, who’s made beats for Ghostface Killah, Prodigy of Mobb Deep, and other Wu Tang affilliates. The cuts, samples and scratches were laid over the beats by DJ P-Trickz (https://ediblebeatz.bandcamp.com/releases). I wanted to get an oldschool feel to the soundtrack, and had the scratching match the images, where possible, rather than the other way around. That, and I never hear any turntable wizardry in Hiphop anymore nowadays. We took our time filming, since none of us can really afford the time to go off on a trip to film for 4 weeks, planning was a bit of a pain. Then after the video was done we needed to look at when to release it, since that had to coincide with a new line of clothing by ‘Nuff Said, obviously something to consider when using rollerblading as a vehicle to promote clothing. I thought it was pretty dope to have a brand that literally has nothing to do with blading be interested in using blading as a means of getting peoples attention, let alone a brand that almost everyone that is featured in the video was already rocking before knowing we’d be working together. Another tiny bit of proof to show you that rollerblading is not dead, far from it even.

In my opinion these are not neccesarily just the best bladers in Amsterdam, but in my opinion definately the rawest, who’s views also align perfectly with those of ‘Nuff Said.

This video is dedicated to Edwin Wieringh † and the Wieringh family.