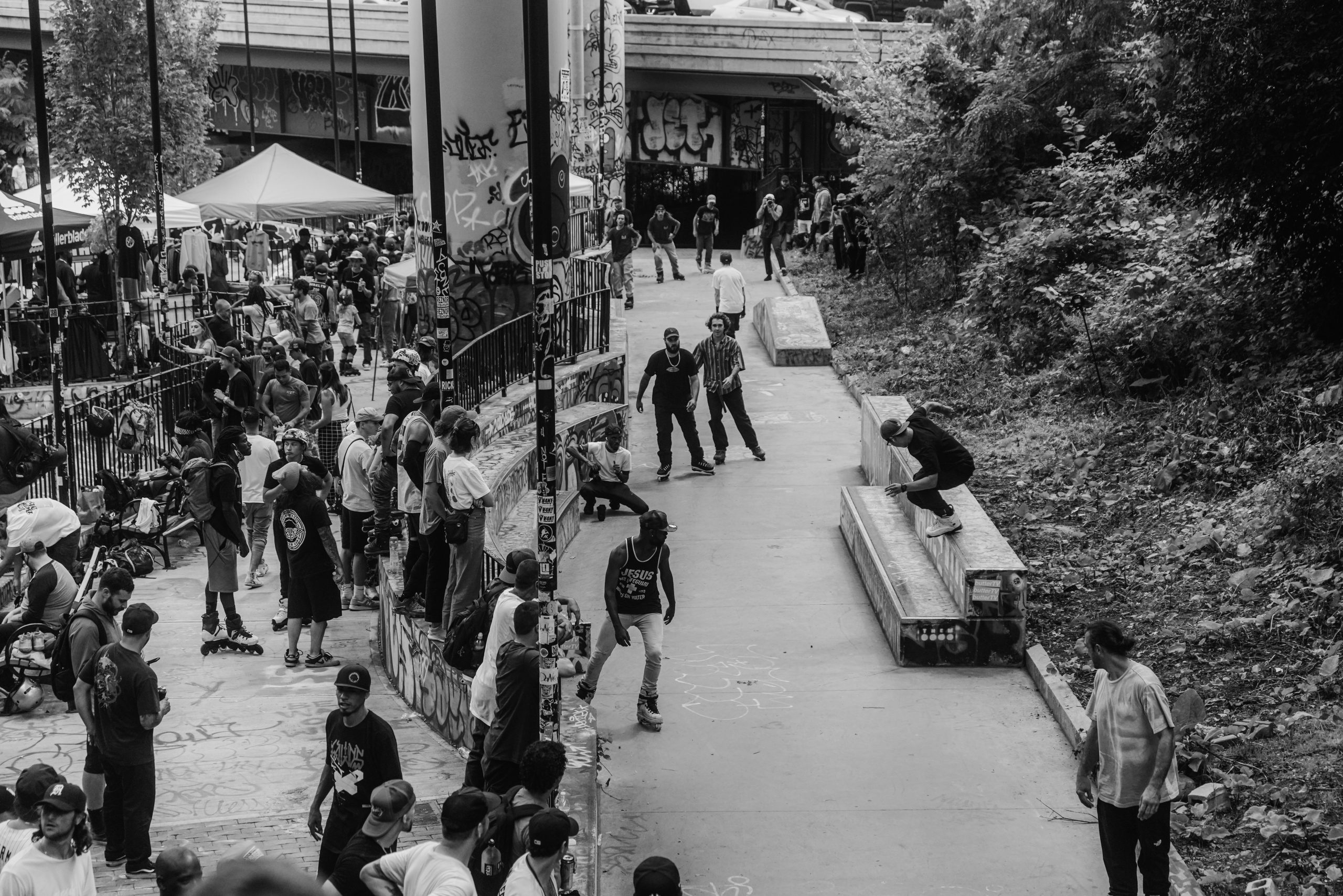 New York City has an allure that very few cities have. It has been the epicenter of the modern world for many years & has been romanticized by countless novels, films and albums. Growing up in a small west Texas town as a kid I was drawn to NYC and it’s vibrant culture that was a stark contrast from my upbringing. I was particularly obsessed with early hiphop, graffiti and the film “The Warriors” – a movie hardly appropriate for a young child, but I digress. The movie showed the early 80s NYC gang culture and although it was super campy at times, it showed a gritty, raw and dangerous side of the city that enthralled me as a kid. When the opportunity to travel to the Boschi Pope Skate Off in New York City presented itself I was immediately juiced beyond belief, but I was a tad bit apprehensive as there was yet another surge in new Covid cases and traveling was strongly discouraged by many around me. But the chance to mark one off of my mortal bucket list was too strong to pass up, so I took all the necessary precautions in getting both of my vaccination shots which were required, and booked my flight for an epic weekend.

To top it off, my partner in crime Jonathan Labez would be unable to accompany me on the trip so the responsibilities to make the most of the trip and cover the event laid on my shoulders. Thankfully Labez recruited Carlos Guzman & Mosh at the last minute to help out with the photography which took some much needed pressure off my shoulders. And my good friend William Isaac also surprised me with his presence and came out with some absolutely amazing photos as well. So I just had to document my trip as much as possible and try not to inebriate myself to where I have no recollection of my experience. No pressure, Kev!

With my excitement & anxiety on a level 99 the day before my trip, I got no rest at all, leaving me trying to play catch up on rest on my flights, with no luck there. Upon arriving in NYC I set course for the Bronx via the subway where I immediately ran into several groups of bladers making their journey to the BPSO as well. Arriving in the Bronx I linked up with my tour guide & host Big Jon Ortiz and Boston native David Bourret, who would give me a proper NYC introduction & schooled me on what to-do and not to-do in the Big Apple. After driving around the Bronx, weaving through the heavy traffic and getting my first taste of the NYC lifestyle, I could immediately feel the overwhelming fast-paced energy that propels this city. It is tangible and something that you really have to experience for yourself to best understand. After fulfilling my moral obligation of ingesting several customary $1 NYC pizza slices & stocking up on party favors for the weekend we headed out for a midnight session on some famous ledges seen in multiple NYC skate videos. Sadly the ledges were blocked by several drunken buffoons who refused to move several feet to allow us to skate so we relocated to a cool metal bench located unfortunately right in front of a packed bar. We skated it as best we could, dodging drunken patrons & drawing both cheers & evil eyes from the individuals waiting in line. Afterwards we made our way to my favorite bar of the weekend, Doc Holidays, where we played several rounds of pool & enjoyed a rather mellow evening in comparison to the nights that followed.

The next day we went out street skating & we were joined by an east coast legend and one of the best to ever come out of NYC, Mr. Ramelle Knight. The original plan for the day was to get some clips of the guys for an upcoming Battle My Crew comp that I Roll NY was hosting. Sadly the rain made short work of our plans, which was unfortunate as this would be one of the few days I could street skate while I was there. Looking back at it now I wish I would have just rolled in the rain & made the most of a bad situation. Oh well, shit happens. After an incredible dinner I ended up laid out after fighting with a recent bout of insomnia and the jetlag finally catching up to me, which prompted Jon & Dave to venture out on the town without me. Unfortunately their night ended rather badly as Dave ended up losing his wallet, leaving him without cash & frustrated on how he would return home to Boston. Sadly the circumstances ended up cutting his weekend short & he made the drive home, missing the comp entirely, which was a total bummer.

The day of the comp we had a late start & we got to the infamous Hamilton Beach skatepark later in the afternoon and the place was extremely packed already. Skaters from all over the U.S and many core blading brands were in attendance for what has quickly become one of the largest blading events in the world thanks to founder and NYC legend Boschi Pope. The park was buzzing with an energy that I so greatly missed, having not been to many blading events in the last year because of, well…you know, that thing. Events like the BPSO always give you the opportunity to meet new friends or maybe have a first face-to-face conversation with someone you may have only held internet contact with over the years. Also having the opportunity to meet skaters you have always looked up to and conversing with them in a casual function is always a plus. Although I am a grown ass man I still feel like a full blown grommet at times talking to some skaters I look up to, I guess some things never change.

Just walking through the park was quite enjoyable as a fan of the sport, my head was flooded with thoughts like “Oh shit, that’s Colin Kelso killing the box rail!”, “Wait, is that Calvin Sayles in that track suit right there?!”, “Do I tell Joey Lunger I am his biggest fan, or would that be too weird?”. I was trying my best to be mindful to soak in my first NYC experience and live in the present moment and enjoy it as much as possible with my old and new friends while also doing my best to document as much of the blading action as well as showcasing the incredible vendors that were present. The tradeshow featured the newest skate drops such as the Them x Braindead collabo skates and the Sean Keane Rollerblade skates as well as boots from the new jacks in town IQON, Faction and even a sneak peak of Boschi Pope‘s very own signature boot. The tradeshow showed that the blading industry is definitely alive and well and there is a visible growth going on that is awesome to be a part of.

The comp was getting cranked up with heads flying through the crowded park lacing mind-blowing stunts on the very difficult-to-skate park. Skaters that really seemed on-point that day were cats like Arsenio Patterson, Mick Casals, Zack Savage and Pablo Porta among many others. As the judges made their selections and the entries started to get thinned out, the amplitude started to get dialed up a notch with heavy hitters like the comeback kid Demetrios George showing off his Jordan-like “Ups” and Montre Livingston spinning both ways with 540s to multiple technical grinds.

The hometown hero and Gawds pro rider Chino Sin was also dialed in all day with tons of consistency,  lacing hammer after hammer in every round and making it look way too casual in the process. The man of the day was none other than the Dad-pant rocking, smooth operator Yandriel Silverio. Yandri was skating with the eye-of-the-tiger the entire comp, skating the obstacles with a creative approach that was extremely refreshing and entertaining. He put on a body shuffle clinic that was reminiscent of a young Jon Elliott in his prime and did it with a ton of style as well. What stood out the most though was Yandriel’s unwillingness to accept defeat. After Demetrios landed the insane trick of the day winning soul to disaster soul grind and leaving many thinking the comp was a done deal, Yandriel stomped his Cults down, hiked up his Dungarees and said “It ain’t over yet!”.

With breakneck speed Yandriel charged full force to a massive gap from the box to darkside true topside pornstar, sealing his much deserved win and going home with a fat wad of cash to show for his hard work. The comp was an amazing event that further proved that not only is blading still kicking but it is growing and showing a significant increase in participation, both from new skaters and also old heads coming back from years away from the sport. After the comp we attended a small after party organized by the Birth Brand and hosted by blading pioneers Chris Edwards and Ray Mendez. The party was chill and featured a rare live performance from The Moonman himself, Phillip Gripper.

After recording the show I linked back up with Big Jon & made some rounds at a few local bars. Somewhere in the night the crowds started getting the best of my anxiety so I took a step out for a walk across the street to a cool looking DIY skatespot & soaked in the cool night air. Sometimes you don’t realize the powerful moments that you may be in until it is a distant memory but I made sure to sit back & relish in the memorable weekend & appreciate it while it was still live. As I looked regretfully at the time & realized my flight home was slowly creeping up & this old tumbleweed would be blowing home soon, I ordered one last bourbon & coke & tipped my cap to the city of dreams- until the next time.

I wanted to thank the organizer of the BPSO, the ski-mask adorned legend Boschi Pope, who invests so much time and effort to make the event memorable. Much praise is also due to his extended team of helpers, vendors, sponsors and skaters who contributed and made the BPSO such an amazing experience. An extra special thanks to my hosts Jon Ortiz & Alaina Abreu for taking me into their home & making me feel so welcome, much love to you and your family.