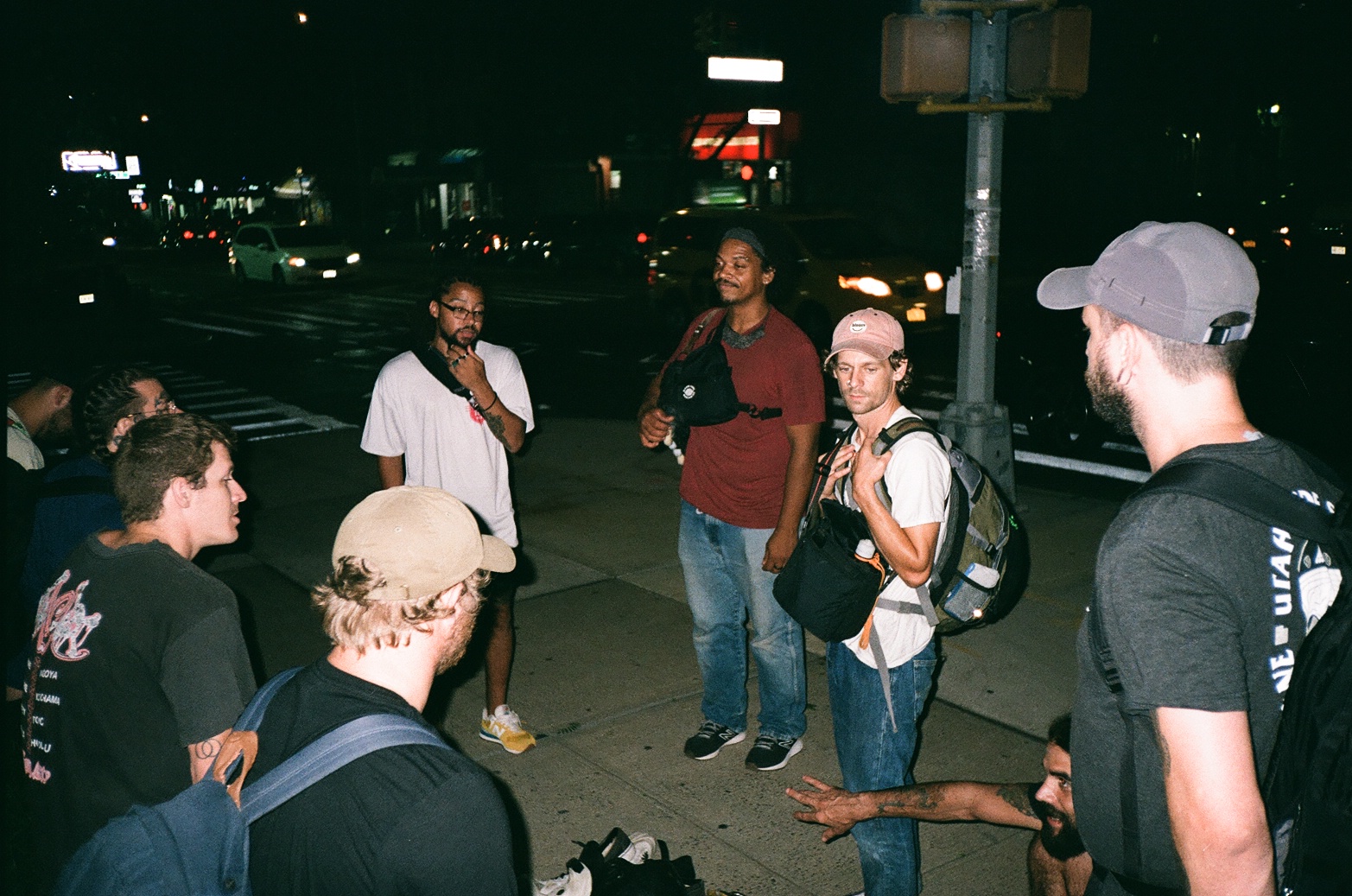 To be honest, I don’t even know where to begin. Let’s start with this was supposed to be just another skate trip. Saved up for a ticket, food, and necessities. Usually a skate trip will consist of 3-4 people in our group getting packed into Kirill [Braynin]’s car, and him not letting us drive because he likes to be the captain. We appreciate this — Train [Owens] and I are slamming beers and/or whiskey at every stop. There are a lot of stops… the trip may take a while, but it worth every minute extra we take to get there.

This one was different tho. Wasn’t a road trip to California. It was a farther trip than our usual state hops. This was New York. Five Utah guys — Kirill, Train, Jett [Rennert], John [Dickerson], and myself took this trip together to get there. We got our tickets, hit the airport at midnight, slammed our beers and were on our way. Arrived at 6:30 am and had no idea what the fuck was going to happen next.

Let me start this paragraph off with this — we stayed with one of the best hosts I’ve ever come across, Jim Rennert. You can see his artwork all over the city. The dude rages harder than anyone else I’ve ever met. Put us young bucks to shame. From getting yelled at by Irish bartenders to bodega breakfast sandwiches and scotch at 4 am. Best human I’ve ever come across for letting 8 gross grown rollerbladers stay in his midtown apartment. The guy is like a mob boss in how he enjoys himself, slanging art and inspires people.

We linked up with Mason [Richard], Caleb and Mick [Casals] from Texas. By the way, if you’ve never raged with them, you’re missing out on a life-changing experience!

SMADADAT RATTRAP! Look it up on Google.

Walked from midtown to Brooklyn. Even got caught in rain mid-walk going to the THEM premiere. Pretty romantic moment while it was raining: I was eating spiced mango slices, Mason shirtless in the background yelling, “MY DAWG!!!”, Mick taking photos on his giant camera.

The rain stopped and we braved on. We made it to the premiere and instantly saw the homies from all over the country. Couldn’t have been a better night to see people like [Jason] Reyna and [Cameron] Talbott. Even met Chris Edwards (I’ll admit I had my gromm moment). All in one room. It made for the best night I’ve had in a while!

The whole trip was chaotic. I think that’s the best word to sum this all up

We went for the contest tho. BPSO was something I didn’t expect. Nothing but chaos and hammers! Trying not spill beer on my cameras. Yadril [Silverio] took the whole thing and it was a well deserved win.

Walking back to the train after the contest, I could hear Latin music echoing all around. Older Latino men and women sitting on folding chairs on the sidewalks. There was laugher and yelling. Drinks mystery cups of who knows what. Bodega cats and empanadas. Train rides on top of more train rides.

The whole trip was chaotic. I think that’s the best word to sum this all up. It was a word repeated throughout the trip.

I could’ve gone to college and done something more with myself. I’ve got a car, a slick studio apartment and camera equipment. I’m doing alright. I sacrificed all that for road tripping with my friends. Memories. Me breaking my tooth in Las Vegas eating a breakfast sandwich, driving to Henderson [California] and getting it glued back together, skating a pit and driving right to Havasu [Lake, Arizona]. That’s a story I’ll tell another time.

It’s shit like this I’m happy I did, regrets and all. All because of rollerblading. In a few days we’ll be pulling up to Blade Cup. Let’s see what shit we get into next. Buy us a beer and find out. — Carlos Guzman