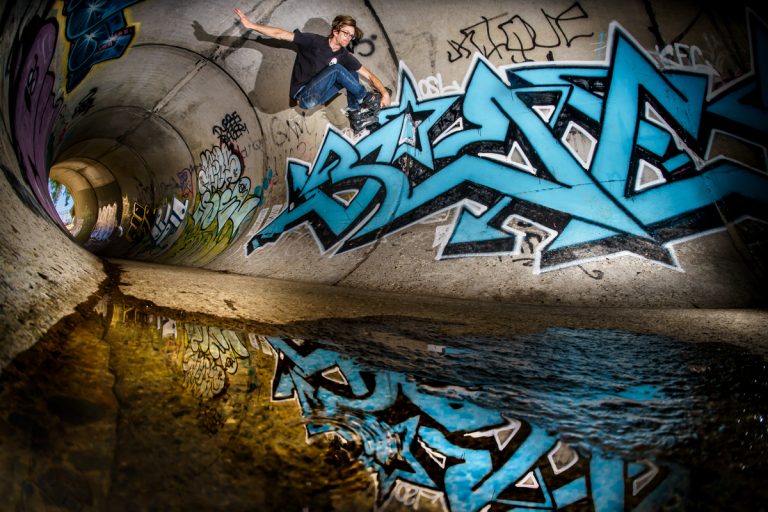 CHRIS COUTURE: IF I LET THE ANGST DIE, I WILL SLOWLY AS WELL

Love and passion go with being opinionated about things. That’s why Chris Couture is an interesting person to talk to about rollerblading. He has a specific approach to spot scouting and shooting, which Steve Steinmetz, who took the shots for this interview, can testify to, making him a bit of a lone wolf, and I admire him for doing his own thing. You’re moving away from Cali, how does that make you feel?
Hey Josip!
I have mixed emotions about leaving California… I never imagined after moving here over 5 years ago that I would ever leave, but my wife’s career is accelerating, and an offer came in to move to Seattle that we couldn’t pass up..
I’m excited though, a new city to thrash, and a completely new environment to experience.. I’m honestly excited for the rain, I haven’t properly healed from injuries in over 20 years, so maybe the down time will be good for me..

How did living in Cali influence your rollerblading?
In so many ways.. The ability to blade in good weather when ever you want gives you the opportunity to focus on your craft, It’s an ideal environment to progress.. It gave me inspiration and new terrain to ride that I never grew up with, Ditches and Street DIY.. My blading would literally look different if I had never moved here, and I’m proud of that, because it will undoubtably look different in the next city I’m in, Seattle… You’re one of the more seasoned bladers still trying to push the envelope almost on a daily basis. How do you manage, physically?
It’s funny, mentally I feel young, and the will to keep pushing is always there, I’m afraid if I let the angst die, I will slowly as well… I could tell you to eat healthy, which helps, lots of stretching/yoga and foam rolling, regularly going to a chiropractor, cannabis and CBD balms and oils…
But in the end, it’s that feeling, the thrill that keeps me on blades, nothing compares, it’s like floating on air when it goes right…
I have a theory about pain, older more serious injuries can feel more debilitating, newer less serious injuries like minor scrapes, bumps and bruises take that old pain away, you forget that you’re missing 40% of the meniscus in your knee, when your elbow is bleeding.. and that shit will heel just fine, but in that length of time of healing you almost forget your knee was ever injured.. so keep pushing, to me it hurts less than the lingering pain of not doing anything, so the old injuries haunt you… Don’t stop, just let your blading evolve, more park, or big wheel sessions the older you get… Look to SlowMo for inspiration… I’ve asked Harry Abel about why people decide to quit blading and he said something really legitimate and understandable, that people just have these expectations from blading, and when they’re not met, they want to pursue other stuff. What is your relationship with rollerblading?
Expectations are about perception, and in this case it’s how some view the classification of the activity we all love… To me, I was introduced to “Agressive” blading through street sections, so to me the idea of competition never really mattered… I watched people express themselves through their parts in videos, from the music, spots, clothing, attitudes and angst, I perceived it as an activity that mirrored who they were as people, and it inspired me, especially coming from a hockey background where you were coached and everything was uniform and structured with someone telling you what to do.. This was different, it was a freedom I never had, to do and be what I wanted, and I never looked back…
so to me in the end, sponsors, media exposure, praise from peers, it all means nothing, If your expectations are to have fun and enjoy the thrill you get from pushing yourself into doing something you never thought you could do, and possibly progressing a craft… That expectation can be met most of the time, and haha approx 75% of the time won’t let you down, we all have times where nothing works right, or we plateau, but push through because that thrill always comes if you keep your blades on long enough, and throw yourself off something once and a while.. Sometimes the only thing you need to do is just put your blades on, the rest takes care of itself.. This is a lifestyle, live it. Also, I’ve heard you can get a bit territorial about spots you find and prep for skating. What do you think newly found spots give to the quality of the blading, or the shots taken or the footy filmed?
Haha yeah I’ll admit that’s true..
Historically ditches and pools are the root of skateparks, and parks arguably wouldn’t exist to the extent they do today without the exploration of these concrete oasis’s… To me it’s exploring an ancient land and portal into where we came from, taking that archaic medium and pushing it further than it has before… Ditches are dirty, scum filled crusty bunkers, but it’s a rad time riding them.. it’s like an ancient undeveloped skatepark which doubles as a Pandora’s box, and blank canvas, these obscure obstacles are the abstract basis for what everyone sessions everyday in their local park.. I just wanted to research and explore that as much as I could..
The longer I lived here the more I would hear at every spot, “so and so did this”, with a weird fan boy energy.. This to me was annoying to hear every time I went out on the blades, especially because that same person is silent when you up that trick, it’s a losing battle from the start.. so after hitting the famous Home ave ditch I asked around if there were more spots like this.. pretty much everyone except Hayden Ball, said no, and I didn’t believe them..
so I started the research and found more than I ever imagined.. Every one of these Ditches are unique and amazing to me, and a lot of them took a lot of work to find… Some for example took me almost a year of trial and error, google earth, and exploring.. These are not normal spots you drive by, or stumble upon, and they actually require research to find.. to me that has a unique value.. I’m all for others shredding them, but like the locals only surf culture, ditch and DIY culture is similar and this shit is sacred.. If you go through the work than be my guest, but if you poached by hearing through the grapevine and then are just easily led there like a normal spot than it has less value, in my eyes, haha but who cares what I think….. To be honest I’ve been explicitly warned before about not blowing up spots by my board homies and I honor that, I don’t want to tarnish our mutual respect and productivity of trading spots because someone I’ve never heard of is in town trying to poach something they didn’t put the work in for. Ditches are aboundant and you shot the pictures for this story with Steve Steinmetz, what do you guys skate most often?
To be honest, I usually Blade solo, it’s how I grew up.. I only had a couple friends on blades within an hour radius, and if you love it enough you just end up getting comfortable doing it solo because you have no other option… This has never been a group activity to me, haha honestly big groups freak me out these days, because I’m so used to being alone. Most people don’t want to accidentally fall into scum and broken glass, and I get it, so I just go solo…
But we have a good scene around here and there is usually multiple sessions going on at once, depending what side of town you’re on..
I grew up in towns with very little skate culture, DIY, Ditches were all foreign to me… So when I moved to San Diego and started to see more ditches and Street DIY I became obsessed… It just so happens this town has such a concentration of that style of terrain it became the only thing i ride most of the time… When you come from a place with no spots, and then move here, concentrating on the spots aesthetic first is easily achievable.. SD has more spots than most cities in the world, and I’m fortunate enough to have a few pro boarders in town who trade spots with me out of mutual respect.. to be honest they hook it up more, which is dope because usually as bladers we never reach anyone outside our microcosm.. This is an amazing city and I’m gonna miss it. What is your career outside of blading?
I’ve done a lot of things in my life for income.. Most of it was centered around the Restaurant industry..
After college I did a bit of Substitute teaching, but the feeling of being on call and uncertainty involved with that made me go back to the kitchen… For the past 4 years I was a grill cook, which lead into an assistant manager/sous chef position..
However due to the move I’ll be starting over as far as a job, so I’m gonna pursue a career in one of my passions, cannabis.. I’ve been a med patient for 8 years, and I’m excited for the potential growth of the industry due to legalization, and I want to be a part of it.