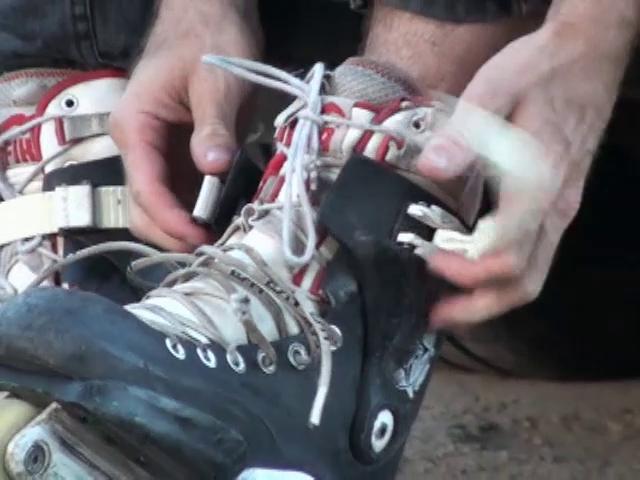 Who the heck is Mike David?

1. Yo Mike, most of our readers probably haven’t heard of you before. So if you have to describe yourself in two sentences, what would you say?

Hi. My name is Mike and I like to party.

2. Who are you skating with most of the time?

Lately I’ve been skating alone. When i finish work i drive down to the new skatepark that is in the town next to me. It’s really fun to roll around it. I like it. When I’m not rolling by myself i like to blade with the boys in Toronto and the other local ripper Dwight, here in Simcoe, Ontario.

3. Do you have any sponsors?

Right now. I don’t know. I don’t think so. lol. It’s up in the air right now. Leon hooks me up at www.shop-task.com and is the best thing that has happened in Canada for rollerblading. Check out the site, they have an awesome blog with lots of content (edits/photos/write ups) and a wicked selection of product.

I’ve been around the scene here in Canada for a long time. I don’t venture out of this beautiful country much. It’s too big.

5. What can we expect from you in the future? More contests? More filming? More traveling?

I will most likely compete until my body can’t take the punishement anymore. I’ve been brutal on my body.  Every year i say I’m going to just take it easy and relax when i skate. Then I strap in and I totally throw that plan out the window. I’ll be skating where ever i can reach. I love skating with every rollerblader. I love skating with my friends that i see everytime I skate and the friends i rarely see when i skate. It’s all good.

6. What do you do for filming?

Most of the time I use my tri pod and film myself. I’ve been trying to film the new skatepark in Port Dover but it’s too busy right now. I need to wake up early when it is a nice day out on a Saturday. If it isn’t my tri pod filming it is one of the broskies from Toronto filming with Dave, Guy, Corey, Blair, Hans, Taylor, Dan, Kaplan, Eric, Chowsa. I love rolling with those dudes.  They rock hardcore.

7. Where do you see yourself in 10 years from now. Do you have some kind of long-term plan? Or do you try not to plan anything beforehand?

I don’t really like to plan stuff out but I could brobably see myself getting married, getting my red seal ticket for millwrighting, still rollerblading and given’r.

8. How would you define luxury? What is a luxurious life to you?

9. What do you think about the combination of parcouring and rolling as your fellow country man Mathieu Ledoux is doing?  Do you like that kind of stuff?

Are you going to do an edit like this yourself?

I think it’s bad ass. Mat Ledoux is the best rollerblader in the world. He can do anything he wants, and he’s a stunt man.  That is brutally awesome. I like what I do. I don’t look at other people’s rollerblading and try to be like them or their tricks.  What I do is not ground breaking by any meens, but i love how I rollerblade. It’s soo much fun for me.

10. Winter is coming up in Canada which is a tough time for a Rollerblader there. What will you be doing during the Winter time?

I enjoy exercising and Judo. As for rollerblading I will be going to any indoor skatepark I can get to. Buffalo, Michigan, Toronto, St. Thomas, and hopefully Montreal. If the streets are dry or I get another pair of rollerblades I will skate street as well.

Thanks for doing this. I think it’s really gnarly that you thought of me and are giving me this opportunity.