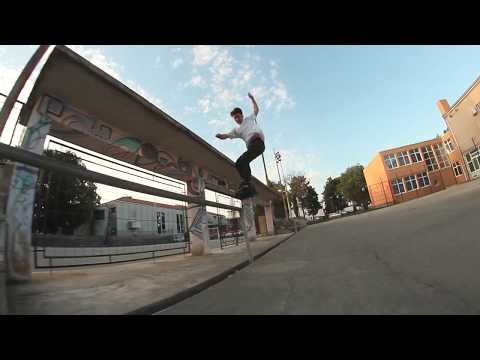 The young Slovenian homie Jan Gašparič is only 20 years old, but has developed a really sick style already, not unreminiscent to the legendary Slovenian and European pro Samo Bajec. Here’s what Jan has to say about his first section ever: I started skating when I was fourteen. Ever since then, blading has been my main interest. Every year I wanted to skate more street, but unfortunately couldn’t find much company… the Slovenian rollerblading scene is very weak. There are about ten other skaters who skate at least once a month, but only some of them are willing to skate street here and there.
I started gathering clips for this edit at the end of September, when I visited my friend Sven in Umag, Croatia. It wasn’t really planned. I spent a weekend there to skate and we filmed some clips. After that I started asking local bladers and friends with a camera, to spend an hour or two with me, to get a clip here and there. I was also happy to have Croatian guys (Sven, Vili and David) over in Ljubljana for a weekend. We had a couple of nice sessions and they filmed some more tricks.
In the end I ended up with clips from almost 10 different cameras, which has had it’s impact on the quality. Anyway, I’m quite glad with being able to film enough tricks to finish before winter. Hope you like it.