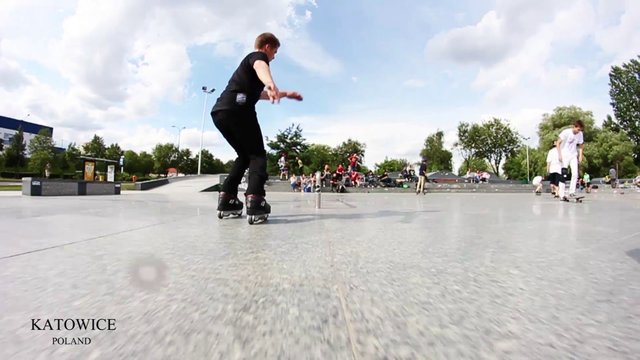 Up and Comers: Toms Krasovskis

My name is Toms. I’m 19 years young and I live in Riga, Latvia. I have bladed for about 7 years or something like that.

Who do you blade with?

I usually skate with guys from TheRolling.lv crew and other local bladers. Nils Jansons is one of the guys I try to blade with and learn from, I don’t think much explanation has to be done about that. Haha I’ve had the opportunity to skate with some pros too and it was amazing. To skate with a person that you look up too so much. I have to mention Richie Eisler, because he’s the one I got the chance to skate with the most and the way he skated and talked about it, the way he treats blading and life itself is so inspiring and it influenced me how I treat life and blading a lot! Shout out to the ‘’Grandmaster’’ himself – You’re the man Rich! Of course there are a lot of other people that affected me throughout my travels like my big bro Fredrik Andersson and the two Europe invaders from Dallas, Texas Josh and Fritz and everyone else who I’ve had the pleasure to meet!

The scene back home is great and it’s growing. When I started there were more experienced bladers than the kids, I think there were just a couple kids who were starting and trying to skate at that time, but now its couple hundred little bladers around the country. Talking about the scene we have to go back and talk about Nils, because I think he is one of the main reasons the kids are trying so hard here, because you can really look up to him. Looking at what he has achieved already at his age of 20 – it makes you believe that you can do something with this too, they see the passion Nils is blading with and they want to do that. They want to be ‘’next level’’. There’s a lot of other things that inspire them too like the local shop that’s trying to get the kids interested in this by doing comps Roll together ‘n stuff. Therolling.lv guys are also organizing a comp once in a while. Soon there’s going to be a history lesson about Latvian blading too so the kids can see the roots of it.

What has influences you in skating?

Mainly I’ve been influenced by bladers. Just crazy dudes killing the shit out of everything! 😀 Seeing the way everyone looks at what we do. The different views, styles the tricks people come up with! The work we put into filming a section. Constantly pushing forward. It’s all pretty amazing I would say!

What inspires you outside of blading and how does that translate to the way you skate?

Besides blading… there’s a lot of things that get me juiced, even failure. If I feel like something is half assed or wrong in some way or something’s missing I have the need to make it right. I simply can’t leave it alone. Like a sketchy clip, you always want to do it over and over until it’s perfect. Seeing a successful story, a struggle that lead to an amazing success makes me want to achieve everything. Simple things like music inspire me probably the most. I always feel like music is so much more than just a song and the variety in it is crazy. Look at all the types of music you can make.

Talk about your injuries, how difficult it was to film the section.

I’ve had a lot of injuries in the past. I did get couple of them while filming the section. Since I got hurt before the end of the good weather I didn’t get as many clips as I wanted for this edit and that was my worst injury yet. I got a contusion, which turns out to be really serious. I got it in the end of August and now in January I’m still not totally healed and the doctors said that I’m actually really lucky because the consequences usually are a lot worse. Now I’m waiting for tests to see if it’s healed. Because I still have moments when I feel like it’s never going to heal. Haha But you know ->BLADEORDIE.

What kind of life you see yourself in the next few years through blading?

I just want to live an easy life, but fun as hell! Do it like a rock star. Haha But actually I have a lot of visions for the future but I don’t want to give away my genius ideas to everyone, I got ‘’big plans’’ for the future! But for now, chilling, having fun and I’ll see what the universe brings me.