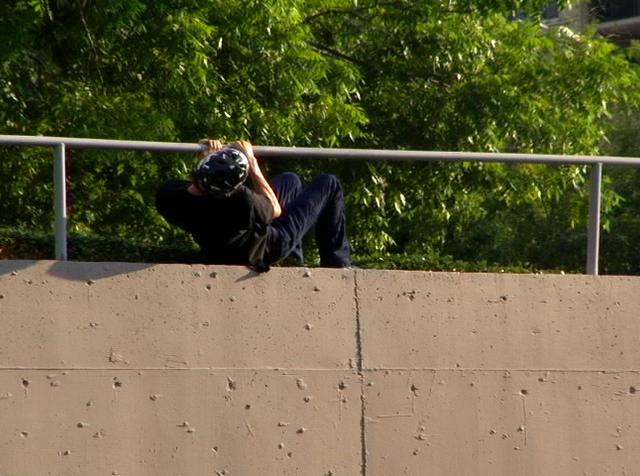 Up and comers: Eric Michael

How long have you been skating? How did you first get into it?
I’ve been skating for about 10 years now.  I remember I was at a friend’s house, who skateboarded and had some ramps set up outside. His neighbor brought over a pair of aggressive skates, and I tried those out and fell in love. That Christmas I had a pair of Salomons waiting for me under the tree.

What motivates you to keep skating?
When I was a kid I was motivated to improve, wanted to do all the tricks that were being thrown by the pros, wanted to be a pro myself. Now, I wouldn’t say anything in particular necessarily motivates me to skate, at this point I just do it out of habit, couldn’t imagine giving it up because it still brings me so much enjoyment.

This was your first SDSF comp. How did you like the park and the event?
The park was incredible, and much more massive than I had pictured from seeing it in videos. The event itself was one of the best I’ve been to yet. The heats were all the same amount of time, laid out in an appropriate timeline, and the event really just had a huge reduction of the wasted time that I’m used to seeing at the larger competitions.

Did you have a plan, or did you skate spontaneously?
I went in to the competition with a few tricks in mind, but for the most part my tricks were spontaneous. The disaster true top porn was definitely something that I had thought about, but wasn’t expecting to land, so just threw it out there at the end of the second round to see where it would take me. There’s only so much you can do for planning a five minute heat, but maybe I’ll try writing tricks on my arm beforehand, I could at least stay free from those “how did I forget to do that trick” moments.

How do you think your performance SDSF has affected your current status?
In the least, I was able to get my name out on the west coast, but I think that’s about as far as it gets me. In my opinion, aside from a few big tricks, my skating wasn’t good enough to really make an impact on the skating world. But I plan to keep getting out to events and trying to boost my status to wherever it may take me.

What comps are you looking forward to?
Well it’s definitely going to be the craziest month of my rollerblading career coming up. I’ll be competing at the Hoedown this weekend, WRS finals the next, and two weekends after that I’ll be able to chill out at the Bladesgiving competition in Florida.

You have a “go for broke” competitive style. How have you been able to avoid big injuries?
Honestly, aside from being lucky, I’m not quite sure. I’ve just become so accustomed to that style of skating, it’s comfortable for me, so maybe I’ve just learned how to fall properly.

Do you do anything special to prepare for a major comp?
Nothing extraordinary. Definitely try to keep myself hydrated a couple days before the competition, try not to eat anything I’ll regret. The morning of competitions I like to stretch a whole lot, and listen to relaxing music to keep my head straight.

What are your skating weaknesses?
My main issue would be my skating itself. I’ve never liked my style, but at the same time I don’t want to just emulate another skater, I would rather just wait it out for my own skating to refine itself, but that seems to be taking quite a bit of time to work for me. Aside from that, my other main downfall is that I lose myself in competitions. I love that adrenaline rush, the roar of the crowd, but I need to remember to incorporate semi-normal tricks in with the hammers so it doesn’t seem like I’m just throwing my body at obstacles.

To be really good in this sport, what do you need more of – raw talent or hard work?
I would say neither. Whether you’re just naturally talented, or working harder than anyone else, as long as you can make your skating unique and likable you will absolutely be considered a good skater.

If you could pick 5 people to session with today, who would they be?
Blake Kelly, Blake Taylor, David Sizemore, Rob Squire, Alex Braunagel.

Who do you think will be the top 5 skaters five years from now?
Honestly, I can’t see Aragon and Haffey going down by then, and the other three would be Livingston, Cudot, and Sizemore. It’s difficult to speculate something like this though; Europe and Japan are producing some scary competitors as it is, can’t imagine what it’ll be like in 5 years.

Who are your role models in this sport?
Haffey for ballsy tricks, Sizemore for attitude, and Farmer for steeze.

Name some of your favorite am skaters right now.
First that comes to mind is Andrew Jacuzzi, definitely one of the most enjoyable skaters to watch. Michael Braud is still holding it down with jaw-dropping tricks. And I also get pumped every time I see something from Adam Ehalt.

What in your opinion are the greatest strengths and the greatest weaknesses of aggressive inline as it exists today?
Our sport is very strong right now. Everyone at the top of the blading world are great role models along with their skating abilities. The tricks are more solid, products are always advancing, styles are more diverse. Ultimately, every weakness of the sport that I can think of isn’t really worth mentioning, because I have noticed huge improvements of those categories. Bigger tricks are coming back, competition circuits are popping up, and companies seem to be weeding out the negative skaters.

What can we expect from you in the future?
Bigger and better tricks, and some technical grinds mixed in there as well. If I can get to woodward sometime you’ll definitely be seeing some new aerial tricks coming from me. I can only pray there will be style improvements. And finally, I guess a positive attitude and many smiles.

Up and comers: Eric Michael from Be-Mag on Vimeo.