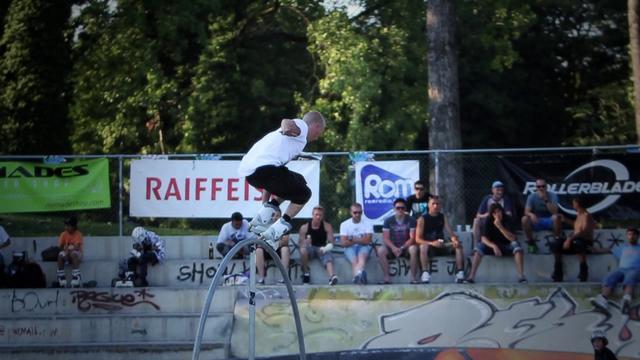 01.09.2010
Early in the morning I picked up Rob, David and Tom at Schiphol airport. Before we went to my hometown Den Bosch I had to pick up the shirts Ralf designed for our tour. The shirts were ready around 2.00pm so to kill some them we had breakfast and did some side-seeing in Amsterdam. After picking up the shirts we went to Den Bosch. The local skatepark opened their doors again this day after a couple of weeks of renovating and creating new obstacles. So we headed over there for a small session. It was a fun session and it was cool to see Rob skate on his new pro model. After that we went to my house to chill and sleep because everybody was tired from their travel and the next day we would have a long travel by car to Lausanne (Switzerland).

02.09.2010
After finally opening a TRS facebook account we took our stuff and started our journey to Lausanne. We had some nice conversations in the car and time passed by pretty fast. We arrived in our hotel in Lausanne around 20:00 where we hooked up with Steve Swain, Warren Digne and some friends from Holland. They also just arrived in Lausanne.

03.09.2010
The first thing we did when we woke up was looking for a supermarket and by a bunch of stuff for the weekend. As Saturday and Sunday were scheduled for the contest we planned a street session in Lausanne. The Dutch guys, Steve, David, Warren and me left to the first spot which was in front of a school. The school already started again in Switserland and all the kids were having their 15 minutes break. After David did a big 360 stale over a bump the kids stopped him and he was signing their shoes, shirts, agenda’s for about 10minutes. When the kids left he tried a couple of more jumps. I was holding David’s camera which was filming now…RIGHT NOW! The next spot was a narrow small white bridge over the water. Me and Dick were the only ones skating there. The rest was chilling in the sun. After my first soul attempt I already cleared the rail only at my second attempt I lost my balance and fell into the water, hehe. This was the first time, in my 16 years of skating, that I fell into the water. In a way it was quiet funny because it was a warm and sunny day anyway. Dick was still killing the rail with a nice backside fulltorque to savannah. After that I got a call from Tom that we should meet him and Rob at the event. After arriving there, it was nice to see all the skaters again, even a lot of old school riders turned up. We skated a little bit in the bowl and Greg filmed some sick lines. At night we had a BBQ with my Dutch friends at their bungalow which was a lot of fun.

04.09.2010
We woke up around 12:00 and slowly went to the event. When we arrived the amateur contest already started. It was a really hot day maybe even a bit to hot, so I was quiet happy the pro contest started later than planned. The contest was fun too watch especially because they added some extra rails to the bowl which made everything look sick and there were many more trick possibilities. Steve tried some hard disaster trick on the ledge but unfortunalely it wasn’t enough to go the final. Finally Rob, David, Warren, Romain and me made it too the semi finals on Sunday. At night their was a roller disco in some club but our group was pretty tired already so we decided to buy some beers at the local pizzeria and drink them in our room.

05.09.2010
The semi final started with 5 RB riders: Rob, David, Warren, Romain and me from which two made it to the final, later that day. Because of the sun I was wearing shorts which was feeling really nice apart from the slams on my knees in the concrete bowl. When I heard I made it to the finals I wasn’t sure if I would still compete but because of a lot of support from the Dutch skaters I took my skates once again and skated properly the best I did all weekend. I almost landed the true top pornstar on the corner rail. Finally I got second right behind Romain Godenaire who won his next contest this year. We had a nice dinner with a big group of skaters close to the lake, it was a good atmosphere and we had a lot of fun. I didn’t go to bed too late since we were leaving back to Holland around 07:00am in the morning.

06.09.2010
That morning we met Steve Swain, Warren and Matt at the parking in front of our hotel. Steve drove all the way from the UK to Lausanne to come with us on tour. Our way back went pretty fast again, we just had a couple of toilet and food stops. Our first real stop was Eindhoven, we arrived there around 18:00. Steve, Warren and Matt were stay at Minime’s house. He lives in a big school building with a lot of rooms and even some ledges inside the building, some there is plenty of space to sleep. After they took their stuff and we left the school and took off to my place. For the following week it was Rob, David, Greg and me staying there. Tom would join the tour back on Thursday because of some meetings in Italy. That night everybody was tired of the travel, so we just chilled.