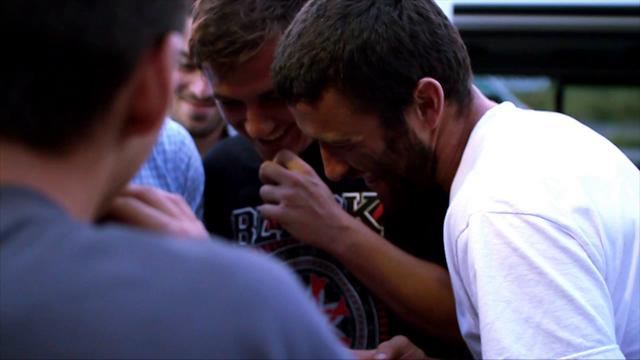 After a good night’s rest, we made our way to the skate park in the city after placing our last stickers on the van. Rain showers mixed with rare moments of sun didn’t hinder our skaters at all, they even found it to be a bit of an advantage for doing cess-slides everywhere. Each location operated in its own way, where the most creative were the best at this game. Tricks were laced despite the gloomy weather. Some locals joined us making it feel more like a normal Cologne park session. The rain decided not to leave, so we went for food at a famous American restaurant while waiting for a lull. It didn’t take long to clear up and Warren went exploring to the industrial area on the other side of the road, searching for a possible presence of spots.

A relatively high loading dock was the next spot. We built a bank and after a few tries, he landed a back royal to top acid 360 ° off. The next spot didn’t scare Mr. Heinemann who did a soul landing into the bank. Then, we joined the whole group in a park covered by a bridge. The place was quite nice and dotted with gaps and rails. Horn, Mathias and Nico succeed in their own way to get their game back with a royal to 180 ° liu kang on a kink for the first trick, a 180 ° gap and kicking a pole for the second and finally a 180 ° That grab gap for the last trick. The day ended with us watching a football game at the hostel. Olli from Be-mag joined us after his work day and he showed us the good places of the city. What followed was a well deserved rest. Tomorrow we will have to get up early to hit the road to Switzerland and Geneva.