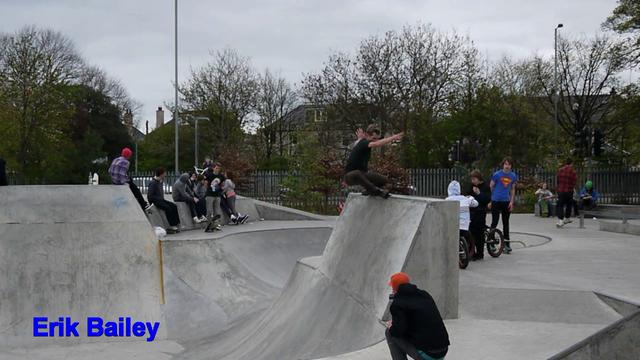 Scott Riddles from scottishrolling.com sent us two edits from the Loco LoveScotland tour stop in Edinburgh.

Check out the raw clips Scott put together here of Erik Bailey, Nick Lomax, Leon Humphries and other skaters:

About 2:15 the two loco tour buses rolled into the car park. All the young kids ran over and started getting stuff signed. The boys casually rolled into the park and started having a warm up before i noticed Erik Bailey hitting the over vert with all sorts of different tricks. One that stood out the most was his picture perfect grabbed front torque up and over. I remember him saying I prefer concrete parks as they are safer to ride. And he certainly showed this to all the rollerbladers of Scotland yesterday. Joe atkinson also ripped it: He hit the outside rail with kindgrind topporn and grabbed alley-oop fish, dont worry everything was filmed, Kola was on it as well as ed and Chaz Sands. Dan Collins was ripping as per, sick grabbed fish from flat along small quaterpipe and round down the concrete corner. So much sick skating. All the kids were super juiced. Dan ives just logging everything on the big bowl such as a true topporn while Lomax lacing 540 true topsoul along the coping. See you at Unit 23 this saturday!

Text and edit by Scott Riddles.