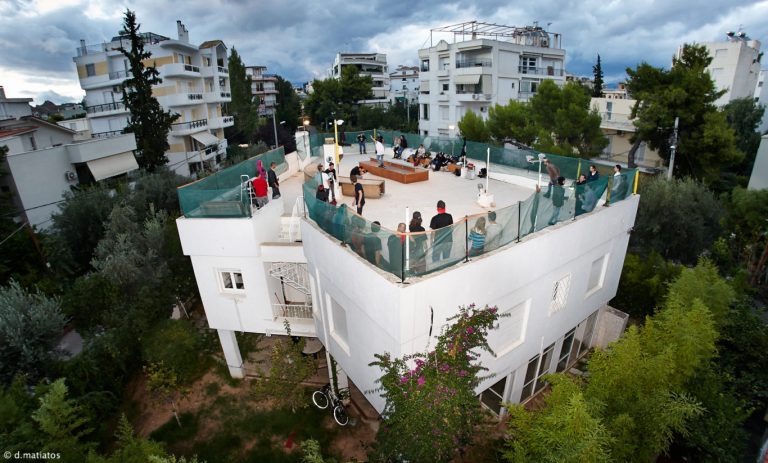 The time of the year to start planning on visiting the Athens Blade House in Greece is here. You’ve seen the madness in numerous online edits and in Karsten Boysen and Benjamin Buettner’s masterpiece Delfon Dio, but how do you run a place like that and not lose your mind? Be-Mag talket do the head honcho, the man of the house, Nick Kouros. What is the Blade house?
The Blade House is simply a residential home in an Athens suburb, with stuff to skate on its premises. There’s a terrace rail-box park, an indoor mini- ramp, a handrail and lots of movable stuff like boxes, rails, launch ramp etc.. The Blade House is fuelled by Syeahskate, a family of friends in Athens, Greece, who love to blade. We have always been involved in blading, one way or another. We make films, organise tours and blading comps, build ramps, donate skates, design and sell clothing… you get the idea.
The house also hosts a film club twice a week. There’s a big garden with a basketball hoop, ping pong table and slackline rope. Various other activities also take place, such as, screen-printing. mural painting & film processing. How do you run a house like that?
Oh, its not that hard, the mix of my friends, blading, film and everything that comes along with these things, are more than enough for me and everyone else here to keep doing this. Its not as full time as you might expect.

How did you come up with the idea?
I was living in the UK studying and then working as a filmmaker, and had about 4 years of no blading, pretty much. After my grandparents passed away, I moved in their home in Athens, where my family grew up. I found myself in a big place with empty rooms. With a renewed appetite for blading I guess I also got hungry for building some blade stuff, and 4 years later here we are…

It seems the house is always under construction one way or another.
The idea of a living room bowl started as a joke, which somehow ended up materializing into reality! That bowl is gone now, but we are building a mini-ramp to fill that space. We are currently also designing a rostrum animation table to be used for our upcoming Syeahskate blade film, music videos and such.
I have to thank all of my friends, family and the people who have worked in these projects with me, it really is a collective effort from so many people to do all this stuff. In the end they are the ones that make it all happen. I love them all. How often do people visit?
During summer we used to have a few people here and there, nothing too crazy. That all changed last year! We had so many great people visiting through summer and the Blade House event, and then obviously the Cayenne boys showing us what is up! Best 3 months of my life.
One interesting fact, almost everyone who has visited the Blade House has been back in less than a year. Guess people are having fun! Got to give big thanks to Jonas Roege, Tim Wolff, Dan Collins, Simon Wheeler, Dominic Bruce and everyone else for spreading the word!

Who cleans the house?
Oh well, that’s definitely an issue, this house produces so much waste, its fucking ridiculous.. But to your question, I do that a lot, then there’s a cleaning lady every couple of weeks or so. My friends help out a lot, I mean you just gotta do it haha. Have to give major props to Chris Farmer for cleaning the house to the last piece of trash, every night!

What about the scene in Athens?
I would describe our scene, like so many other places I visited, as very small but quite strong. A lot of us have been friends for 20 years, you know? The blade house & Syeahskate has definitely given much back to this small community. Most people in the local action sports scenes know about us and we are respected for our videos, films and clothing, which is what we are most known for locally. Did you ever manage to capture it on video?
Our 2008 film “Arrostia” is widely regarded as one of the best action sports videos to come out of Greece. The film got very good reviews, won a video art film award in London and improved our scene quite a bit. Richie Eisler and Jan Welch viewed it recently, and loved it.

You hosted the Cayenne crew, which led to the production of Delfon Dio in Greece. What went down?
Oh, man. What an utterly amazing experience. For me the best part of the whole tour, besides being constantly amazed of what these non-humans can do on their wheeled boots, and besides getting to shoot some of that action, was getting to know these amazing people as they really are. I mean, you get a glimpse of that if you are with someone everyday for a month. It’s nice to know that they are also normal people, you know? Their ups and downs, their excitement and worries. Their human aspect, that’s something you rarely get by watching blade videos.
Too many great stories to share one here, but I can easily say that I am proud to call them my friends, and could not be any happier about the absolute banger that Karsten, Benny, Freddy, Dominik and all the boys unleashed upon the world. For those wondering, “Delfon Dio” is the street address of the Blade House.
The echoes of the Cayenne tour are still felt here today. A lot of us are skating flat now, hahaha. So finally, what is the Annual Athens Blade House event?
First, go check out www.athensbladehouse.com. Our Athens Blade House event in the 2nd of September is simply a big party celebrating blading and having mad fun, meeting old and new friends from around the globe, dancing or moshing to great live music and witnessing the amazing skills of bladers from all over Greece and the world. Its quite an extraordinary event, and every year I am thrilled when people tell me it’s one of the best parties they’ve been on. In the past we’ve been lucky enough to have had people from the US, Canada, UK, Ireland, Germany, France, Czech Republic and Australia join us and we definitely look forward to seeing more of you here.
The weeks preceding and following our event we have organized blade sessions, beach trips, island trips and all sorts of fun stuff, so feel free to contact us if you want to be a part of this.
The local team from Vice did a piece on our 2014 event, titled “Sickest event of the year”! It truly was off the hook, so come be a part of it this September 2nd, 2017!!!