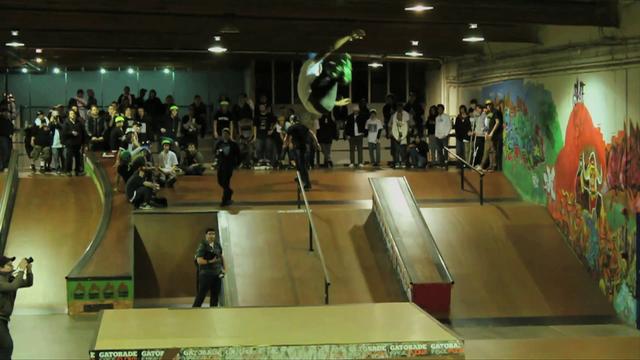 Jeremy Townsend a name people should at this point recognize and remember came to the rescue. After listening to the many cries of locals regarding their worries of the coming event and for that matter the future events; with less than 30 days till start, Jeremy got the ball rolling! He called for meetings at Skate Barn, arranged sponsorships, a website, and promoted to skaters worldwide. This sorted out all the messes that could have ended another great event for the Washington Rolling Scene.

As the day of the event approached I wasn’t to sure what to expect.

Then the Eve of Barn Burner 2011 came along. After seeing an almost human less Skate Park all expectations were down the tubes. The park was sprinkled with a couple bladers here and there. Mentionable names of the likes of Aaron Feinberg, Erick Garcia and a few of the local shredders. I also saw a couple of fresh faces whom I’ve never seen or met before. Surprisingly enough I was able to still capture a few photos!

The next morning when I walked in to get my media pass I find a new friend by the name of David Jones. Together we walked around for a few minutes scouting for the best angles to capture stunts we both knew would be attempted later that day. By now the competitor list had grown from 12 people to about 20 and continued to grow throughout the day.

I had a feeling the winner of this event would be yet again last year’s winner Erik Bailey. Then along came the first round where I quickly started to second guess myself. Out of the gate everyone was skating like it was the finals! It was extremely hard to capture what was going on. Skaters were back to back, one after another. It was truly mind blowing. Only a kid with A.D.D. could keep up with that sort of action. At first the crowd was silent but before too long the Barn sounded much like the Super Bowl! People were jumping up and down yelling and screaming. Surely plenty of people lost their voices that day.

The finals were pure chaos which didn’t make it easy for the judges to decide. Personally I still can’t believe Iain Mcloed did Soul 900° another kid doing Royal on the hitching post with a back flip transfer into the bank and who could forget Josiah Blee’s speed during a Fakie 630° Truespin Savannah! Jake Dotson even attempted a boosted Fakie 1080° on the spine.

I’d like to go into more details but I’m sure everyone would just like to watch the edit! Something I really didn’t understand though was why finals were seven people and not ten? This didn’t really make sense. Anyhow congrats to the winner Josiah Blee who came out swinging. He hit near impossible tricks and anyone to argue his place this year is nuts. So with all of that being said this year’s event felt like it was years in the making and for one of our own to take home the win – it truly means so much to us! Can’t wait till Barn Burner 2012!

Local skaters already taking to Josiah Blee, a winner in their hearts even before it was announced!