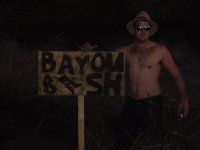 Be-Mag·April 30, 2013
Can you tell us something about the history of the Bayou Bash?
Bayou Bash is a New Orleans blading competition that started in 2008. We’ve had about three other competitions hosted in New Orleans. The original brain child of the New Orleans blading competitions would be Kareem Shehab, which dates back to December of 2002. In 2008, our friend Brian Starnes, who is originally from Atlanta, helped us get the ball rolling again. Stu Baird and Brian went crawfishing in the bayou, which mainly consists of drinking beer and checking traps for them mud bug when Brian said to Stu, “I want to hold a street contest in New Orleans to let em know we didn’t wash away in the storm.” Stu says to Brian, “Alright we’re gonna need more crawfish for the boil.”. Another competition followed in 2009.

In 2011, when I was running a skate park with my friend Halley Borenstien (who mainly made that possible), we decided we should throw a competition in the park. Be-Mag was there to cover it.
http://old.be-mag.com/article/1898-New-Orleans-Bayou-Bash-2011-Contest-Report-
It was a great success, but coincidentally also the last comp at that location because the skate park has since been dismantled.
You mentioned the storm, what impact has hurricane Katrina had on the skating scene in New Orleans?
Katrina hit the city in August of 2005. It pretty much scattered all of our friends throughout the US for a while. Some of us came back once the city allowed us to and some of us trickled back into town or moved. The hurricane itself actually created some of the most awesome spots. We had one spot, which was a cement dock on the river which collapsed and formed quarters in the river. That’s probably the most unique spot resulting from Katrina as we could only skate it at low tide! The spot was even featured in Jack Be Nimble!… It’s been 7 years since the storm made land fall in New Orleans and we’ve since bounced back and recovered.
Back to the competition, what can we expect from this year’s competition?
The heaviest of hammers were dropped at all of the previous New Orleans competitions. And we can all expect this year to be no different, especially with some of the spots we have. And of course a competition wouldn’t be complete without a proper afterparty!

What can you tell us about the spots?
This year the Bash will feature a couple of fun spots in New Orleans. We have a brand new c-ledge near city park that I am STOKED about showing people. We’ll also be recycling a multi-handicap rail spot from previous years in Hollygrove. Finally, we’ll be going to another multi-spot at a bus stop east of New Orleans on the westbank. You can see some of the spots below!
Who can we expect to see at the competition?
There will be the local bladers representing but I am sure we’ll be seeing people from around the south coast. Recently, I’ve had the pleasure of skating with some heads in Texas and I think their hitters will pay us a visit. Through the years, we’ve had some great skaters lay it down and partied after the event. Skaters like Nimai Delgado, Stu Baird, David Sizemore, Blake Kelly, Phillip Gripper, Eric Michael, and Gumby have dropped some of the biggest hammers I’ve seen in the last couple of years. Hopefully the date of the event is convenient for them so they may return!
Is there anything you would like to add?
I am most gracious about all of the help that I’ve received from various companies. It speaks volumes to me seeing companies, that I’ve been supporting throughout the years representing on the flier. That’s what’s up! So, I’d like to take this minute to thank the following: Gill from Roller Warehouse, Adam from E-Rolling, Matt from Sunshine Distribution, Brian, Hakeem, Billy from Create Originals, and last but not least everyone at Be-Mag. I can’t say thanks enough to all the support. I’ll see you guys June 1!

Preview of the Bayou Bash 2013 spots!