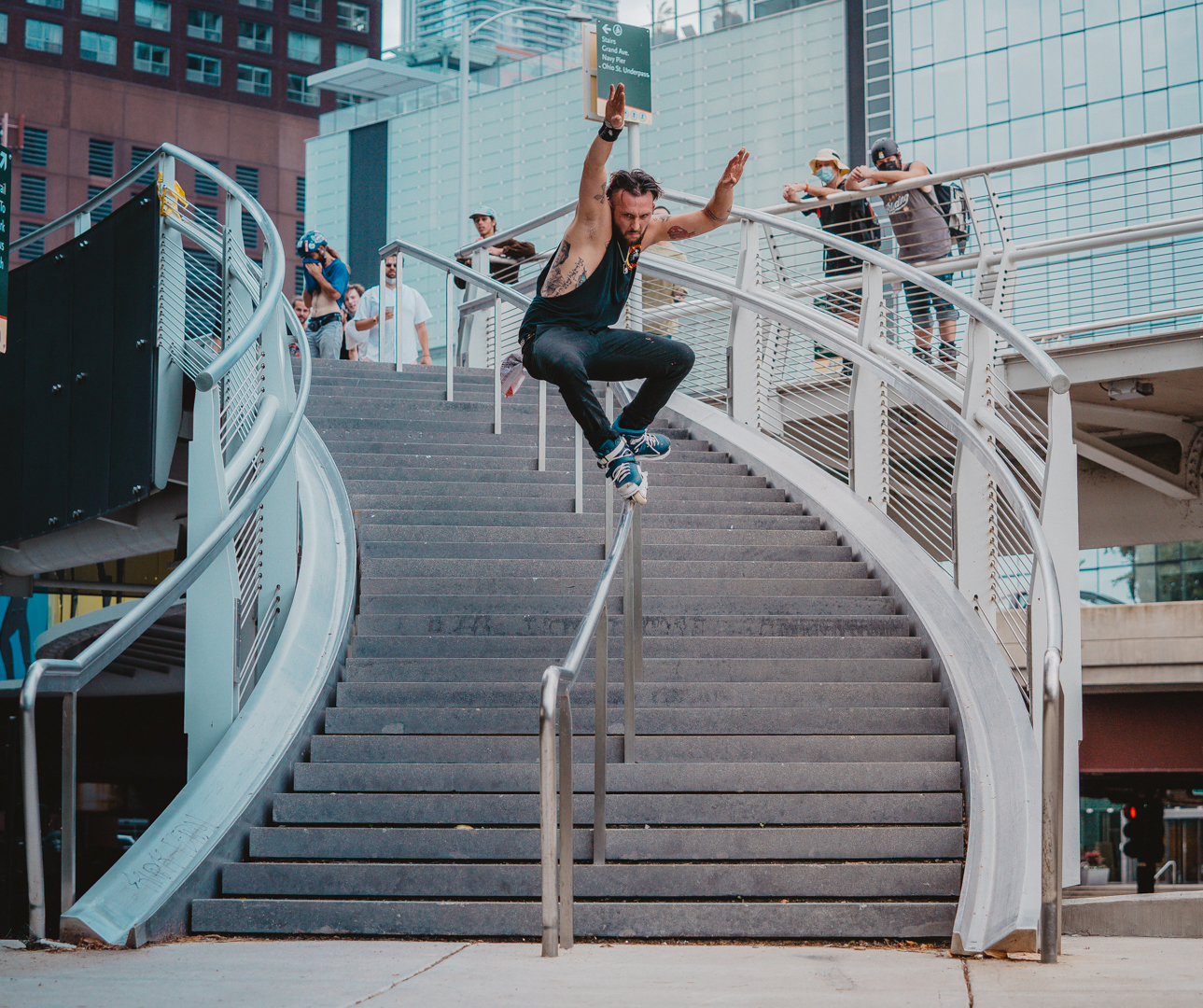 The Windy City Riot has hit a major milestone in reaching its twentieth anniversary this year, a feat that has not been touched by many within any action sport community. The amount of preparation and work involved in organizing an event on the streets is always chaotic and to do that consistently for two straight decades is astonishing and worthy of praise. With the Covid-19 pandemic putting the majority of skating events worldwide on temporary hold, it was up in the air on whether the Riot would proceed this year. But just like they have done so many times previously, the organizers adapted to the adversity in front of them and the show went on.

Our good friend and Be-Mag correspondent Mike Jimenez made the trek to Chicago to document the monumental event and had the opportunity to take some incredible shots of the comp and answer these quick questions about his experience in the Windy City. Here is what Mike had to say.

Hey Mike, thanks for taking the time to speak with us about your trip to the Windy City. Now when I think about Chicago, one of the first thoughts I have is it is home to some of the most imaginative architecture in the U.S, making it a mecca for dope skate spots. Did you get to skate any street spots or go explore while you were out there besides the competition?

All I have to say is Chicago is one big skate spot! From the moment we hopped out of the Uber from the airport we had some time to kill before our check in at the hotel. So we walked around the corner to see what was nearby and found some marble line ledges! We dropped our stuff, threw our skates on and started to sesh! After checking in the hotel we got situated and went down stairs, put our skates on and roamed the city until nightfall and skating everything in sight, it was amazing.

You were actually in attendance for the Pow-Wow, which was the last big blading event before the pandemic really became widespread in the U.S. How do you think Covid-19 had its effect on the W.C.R?

To be honest I think it definitely had a huge effect on the contest meaning we got to skate spots longer then usual due to Covid and also due to protests that were taking place the same day as the contest. The turnout was better than I expected and the contest didn’t disappoint! They had heavy hitters out there like Gumby, who won, Paul John a local Chicago killer, who was just on Jump Street, definitely go peep that! Plus Luke Naylor, Egon Naab and many others!

I can only imagine how difficult it is to organize a street contest in these difficult times. Were there specific precautions taken like cleaning stations or sanitizer available to the spectators and participants?

Honestly Dave and the crew had that handled with W.C.R masks available for those who didn’t have or bring one as well as hand sanitizer but most of the spectators and competitors already had that covered. Everyone stayed pretty spaced out and respected everyone’s space.

The city of Chicago is famous for it’s delicious food, it is particularly well known for their pizza and hot dogs. Did you have a chance to try any of the local cuisine while you were there?

Actually yes one of my good friends Aaron Lanzarin recommended many good places to try and our first stop was Portillo’s and I got a Chicago dog and a burger. It definitely didn’t disappoint. The bun was little different than where I’m from in Cali and instead of relish they put half an actual pickle! Never seen that before!

I am a big fan of keepsakes from my travels, just as a friendly reminder of my trip. Did you bring home any particular item to remember your stay in Chicago?

Yea for sure! I would have to say I didn’t bring anything tangible home but “If you build it they will come” comes to mind even during the Rona/ pandemic. I myself am suppose to be throwing a competition this year but since the whole pandemic I wondered if it was still possible and is there a safe way to do it and now I have a better idea how to proceed if I still want to throw one this year if not next year. Thanks to W.C.R and the good folks that put it on.

Good answer, my friend! I hope the B.A.S.S goes down as planned! Now the comp had numerous incredible skate spots that competitors hit throughout the day, out of all the spots during the Riot which was your favorite?

I would have to say the second spot was  a down curved rail down the center of some stairs with a gutter on the side of the stairs that you can skate on. And there was also a top rail on the sides that was super high that many of you saw on social media that Gumby did a huge backside on which was nutty! And the drop was huge! There was also a wavy ledge that was super aesthetic by the water on the edge of the city.

I know there were so many noteworthy moments from the event but what was your favorite moment from this year’s W.C.R?

I would have to say when we were at the last spot which was a massive ledge down a double set with rails to hit in the middle along with a wallride on one side. As the contest was winding down a caravan of police came down the street in unmarked Ford SUVs and one of them stopped in the middle of the street and hopped out to see what was going on and that’s when Dave spoke to them and they gave us 15 more minutes which was plenty of time since we run on blader time and not real time. They ended up flipping a U-turn and parking on the side and watched the rest of the time we were at the spot.

What makes the Riot different from other blading events that you have been to?

I think what really separates W.C.R from other competitions is the plethora  of spots that they have if one falls through. Like I said before, the whole city is a skate spot! We got booted from the second spot and they already had plenty of backup spots in mind. And this isn’t W.C.R‘s first rodeo, this was the 20th one! Glad I was able to make it out and take some photos and document such a great competition and all the amazing bladers that competed! Can’t wait for next year. Shout to everyone involved with throwing this contest! And shout out to Gumby who took first and Luke Naylor who took second and Egon Naab who took third. Also they donated $500 from the purse to BLM which is amazing and others should take note! I also had the chance to attend a BLM protest the first day we were out there which was very interesting as I have attended many here in California and it was good to see it still going strong in other states! Support where you can and keep the shred alive catch everyone at the next contest!

Be sure to check out the official Windy City Riot video coverage by our good friend Aaron Schultz if you missed our previous article.