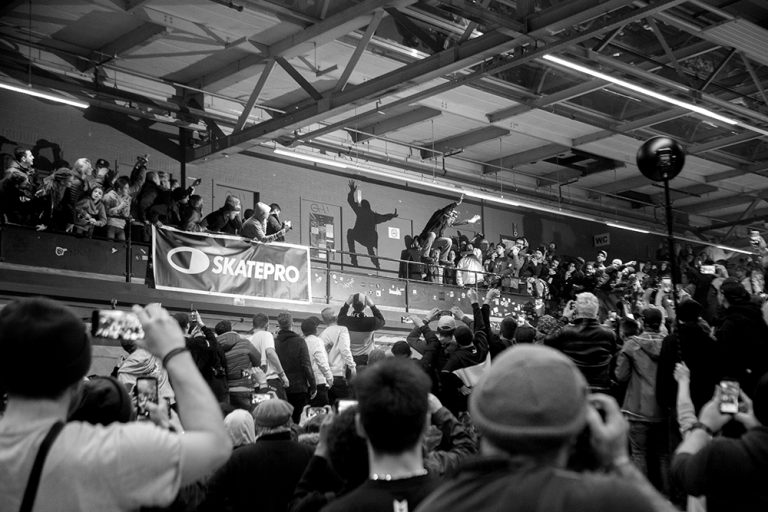 REPORT: WINTERCLASH 2019 WAS A TRIUMPH

Joe Atkinson’s final trick of the night, the backslide up to stall 270 revert on the Roces wall extension was the perfect gift to Jojo Jacobi for the fifteenth edition of rollerblading’s premier event, Winterclash.

Truly, there was something in the air during the week of this year’s Winterclash. Unlike the past couple of years, instead of being cold, foggy and soggy, Eindhoven was sunny and unusually warm for this time of year, especially after a short stint of almost polar temperatures in the Dutch city. There was an atmosphere of expectation, which wasn’t present so much during the past few editions. Also, some faces showed up after a long while, making the bets on who is going to take the win more complicated and less predictable. You could see the hunger in the eyes of the competitors on Thursday at the infamously chaotic Hanglosers Superbowl, one of the best nights you could ever spend watching rollerblading. From more than 60 countries, rollebladers have come to Holland to try and take the crown. Woorapoj Boonim came all the way from Thailand, and was just one of the people who was really hyped to compete and give it his best. Roces flew Yuto Goto to Holland all the way from Japan, and he decided to try and up his last year’s performance. USD’s Eugen Enin, always a contender, painted the skatepark in his destinct creative colors, which in the end earned him the Most Creative Trick Award.

A lot of people were sure that if he’d competed, Antony Pottier would have the chance to take the triple crown.
Even though you’d never expect it, it was actually the Junior’s Division that offered some of the biggest surprises. While Brasilian Danilo Senna skated extremely well which earned him second, nobody could touch Skatepro’s Felix Falling. He showed just how much blading has progressed during the past few years by performing the soul stall on the rail above the big quarterpipe, the same trick Antony Pottier did to win the pro division two years earlier. Felix Falling dials in on a soul stall above the quarter to solidify his win for the juniors division at the 2019 Winterclash. Photographs by Ryan Loewy for Be-Mag.

The Women’s Division gave us insight into some new faces, such as the incredibly talented and young Misaki Katayama who placed second and earned the K2 Best Newcomer Award, but it was again a triumph for the versatile Mery Munoz, who not only managed to participate in the panels, talking about her model for a skate school, but won with a gnarly rail transfer at the uncomfortably steep rail in the middle of the park. In the Amateurs, Spain’s Xavi Eguino took the win with big amplitude and high speed skating, with Martin Walchshofer in second and Michael Witzemann in second. My money was on Walchshofer due to his great style and combo of park and street tricks. Maybe next year. Xavi Eguino dials in an AO Top Soul on the extension QP during the finals of the 2019 Winterclash. Photograph by Ryan Loewy for Be-Mag.

In the pro division, young guns Martin Danning and Dominic Bruce for the first time competed in the pro division and placed in the finals, with Bruce taking second and showing that we do have a new generation of incredible skaters ready to take the helm. Martin Danning and Dominic Bruce compete in the pro division for their first time at the 2019 Winterclash. Photographs by Ryan Loewy for Be-Mag.

Veteran and 2011 Winterclash champion Dominik Wagner skated as fast as ever, showing he’s up there in the top 3 that may take the win. Unfortunately, due to an un-named idiot skating in the finals without even competing and hitting Dominik who was coming off a full speed bs royale, we didn’t get to see what he had up his sleeve. Dominik Wagner flys high during the finals at the 2019 Winterclash. Photograph by Ryan Loewy for Be-Mag.

But, it was Joe’s night. Jojo and the crew built an 8 foot wall extension off of the 12 foot quarterpipe, something he’d been eyeing since Thursday, trying out different combos and switch ups on the almost vertical rails on the extension, such as royale up to royale down on the rail, transfers, backslide up to fish stall etc. After the final round, Joe decided to pay respect to the gnarliest street skaters, deciding to royale the railing of the first floor of the skatepark to 180, and this could have gotten him the win then and there. Atkinson dials in a royale to drop at the 2019 Winterclash. Photograph by Ryan Loewy for Be-Mag Joe seals the deal with a backslide up to stall revert on the wall extension. Photograph by Ryan Loewy for Be-Mag.

But, he knew he had to go for one other final trick, the backslide up to stall revert on the wall extension. And everything just came together at that moment. His speed coming to the quarterpipe was perfect, and the angle at which he hit the vertical rail on the extension were both as precise as a Swiss watch, and then the one second backslide stall on top of it. It felt like an hour up there. And then it was done, Joe was named people’s champion. I was sure he’d earned the title and congratulated him in silence while he waited for word from the judges. The total results were announced and the celebration continued at the Afterclash. How Joe broke his Winterclash statue we yet have to find out. All the other programs, starting with Brian Bina’s INTI premiere, then the incredibly fun Night at the movies with the truly legendary Alex Broskow, all the panels that covered topics significant for the future of rollerblading, the tradeshow where you could see new skates from five different companies were just as important as the competition itself and showed why Winterclash is seminal and how Jojo Jacobi’s vision is shaping the future of our sport and culture. Personally, I’d like to thank to Jojo for making Winterclash the event that gives rhythm to the rest of every year in rollerblading.