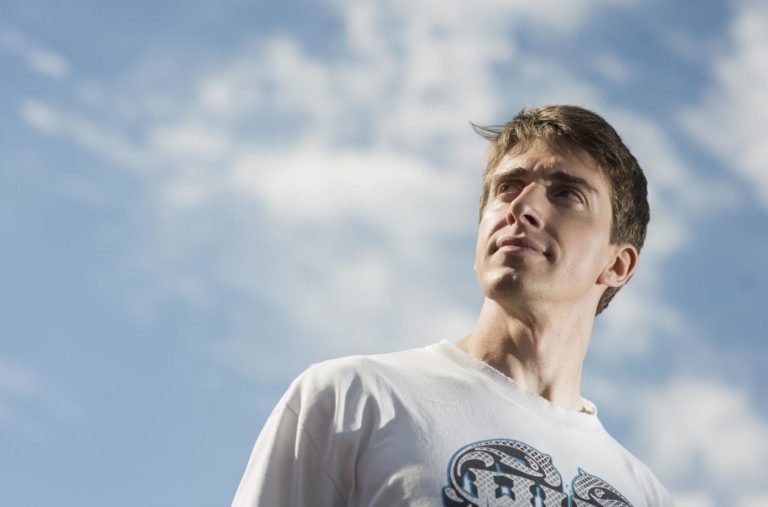 OLLIE JONES: SPEAK TO THE KIDS ABOUT BLADING

Ollie Jones is from Cheltenham near Bristol, he’s almost thirty and has been a rollerblader for two thirds of his life. When he’s not skating, he likes to exercise or mess about in Photoshop. Ollie loves the finer things in rollerblading, such as performing true spin topside grinds on handrails, and sessioning with his friends. He thinks rollerblading schools are a good way to attract young kids to rollerblading and supports rollerblading being a part of Nitro Circus and Nitro World Games. He’s keen on travelling more abroad to skate, and therefore he’s a bit worried about the consequences of Brexit on UK rollerbladers wanting to travel to the EU countries.
Be-Mag likes Ollie’s skating and that’s why we’ve done an interview with him. The UK has a steady tradition of delivering great talent to the global scene, and even more so in the recent years with a whole wave of influential UK pros, such as Nick Lomax, Scott Quinn, Alex Burston… how did that change rollerblading in the UK?
I think there has always been a good amount of international skaters from the UK. Europe as a whole seems to have so many different events now that people are in and out of different countries all the time. We have events here that bring people over such as NASS and the MCR Jam that Alex organises. Before that we had the Chaz Invite comps at Unit 23 then Rampworx. Maybe having more indoor parks around the country now helps to bring people over for events. It will be good to see how big the British Championships are next year.
A lot of big names in the UK also do a lot to bring new people into the sport by doing skate schools at their local parks and also visiting skate schools elsewhere like the one I think they have in Sweden.

As I told Sam Cooper, your skating has this ‘retro’ feel to it, and I meant it in the best way possible? What influences your trick and obstacle selection?
Hahaha, I definitely have certain tricks that I like to do all the time. I’ve always enjoyed skating handrails more than anything else which is a bit less of a staple for street sessions now than it was a few years ago. Handrails were always what we had most of around here growing up so that is what we skated more than anything else. Nowadays I will try and skate most of the things we find so choosing a trick will come down to what is actually possible for me to do on the spot or what works best for a photo or clip. If it’s a really standard rail spot I guess I would just do as many tricks as I could on it anyway haha, usually in the same order. We’ve seen in your recent edit for Slaptap that you seem to enjoy classic sessions?
Skating a spot that everybody is up for skating is always more fun if you can find one. A lot of the things we go to will be for one person to do one trick on and then move onto the next. So when we find a spot or a park that everyone will skate you can have a much better session as no one is sitting around waiting to leave. We managed to get a few big groups together for those weekend edits that Mark Worner made over the summer and they were really good fun.

You said that you do tricks in the same order when you’re at a spot. Which tricks do you do most often and feel most comfortable with, your fishbrains look sick?
Back royale would normally be the first trick on any spot, or front royale if it’s the other side only. My most comfortable tricks would be ao grinds and all truespin topsides. I like to do all of the normal soul/topside grinds both ways. Fishbrains I actually might not be too good at haha but I do a lot of true fishes and makios. What’s the most challenging thing when it comes to rollerblading in the UK?
The most obvious answer would be the weather. It can look like a great day in the morning, then by the time you get somewhere to skate it could be totally different. Sometimes it can happen the other way round where you think all day it will rain but it never happens. I try and just go out anyway and see how it goes.
We have also always struggled to find those ‘perfect’ spots that don’t really exist around here but everyone adjusts to skate whatever bits and pieces we can find. Plus I actually like skating high flat rails so there are a ton of those hahah.

When it comes to the recent ups and downs of rollerblading, what do you think was the most dramatic single event, good or bad?
The Nitro World Games thing was a pretty big step for blading to be back in the same arena as bmx and other really popular sports which is good. A lot of people were upset about not being able to watch it on TV but the response from the people who did see it seems to be positive so maybe it will be even bigger next year. As for something I was more a part of I always think that the inline comps at NASS are a really good way for the public to see incredible skating first hand. There is a good mix of people doing a lot of technical stuff balanced with enough people who can fly around a park with huge flips and transfers. Your team colleague Chris Haffey is doing great things with Nitro Circus, do you feel this is a good way to promote rollerblading?
Definitely. Enormous mega ramp skating clearly has a lot of appeal to the public as it is easier to appreciate a 40 foot double backflip or something than a technical ledge or rail trick. I don’t know how much experience some of the guys in the nitro games had skating a ramp that size before the competition but they were all doing amazing tricks.
A lot of people who go to see the nitro circus live tours may have forgotten or never really known about blading but seeing Haffey doing huge tricks alongside their riders from other sports must be positive.

Skating so long for a single skate brand as you have for Remz, do you feel compeled to try other brands?
Not really. I have been skating remz since the first UFS ones came out in 2003 and I have always liked them. They fit my feet well and suit my kind of skating. Plus I don’t really like getting used to new stuff haha, I don’t even change the parts on them for as long as possible. How did you get into rollerblading? Was it something you saw on TV or through friends? Do you often have a chance to talk to young kids and inspire them to try rollerblading, with so many skateparks in the UK?
I think I originally had some cheap rec skates like most people probably did and then one of my friends from school had been to a little jam somewhere and had some photos of him meeting Richard Taylor and grinding some little rails so we just started trying to do things like that. They had also recently just put a mini ramp in on some old tennis courts in my town and we spent a lot of time just trying to get to the top haha.
I don’t know if I inspire anyone to start skating but I definitely try and speak to anyone skating at any of the parks we go to. A lot of kids on scooters also often ask how much skates are and where they can get some from so maybe they might be interested one day.

NASS is almost in your hometown. What does it feel like to host so many great skaters and compete against them? Whos skating did you enjoy watching the most at this year’s NASS?
It is good having NASS quite nearby as it doesn’t take us too long to get there. I have friends who live really close as well so it’s easy to escape NASS at times over the weekend to go and get some proper food or whatever. The parks that they build for NASS each year are always really good and it’s a shame they are only there for one weekend of the year as it would be one of the best indoor parks to go and skate otherwise. The up side to the park being temporary is that it is equally new for everybody so it doesn’t matter if you live 10 minutes away or on another continent, everyone has the same amount of time to skate the park and no one has a local advantage. It was great to see Gav Drumm skate in person for the first time this year as well as Julien Cudot do the wallride flatspin out for best trick. Joe Atkinson definitely had the best lines of the weekend and also saved me from choking on a custard cream so I’m glad he was there hahah. How do you combine everyday life with rollerblading, do you get to skate as often as you like?
Yeah I skate pretty much everyday unless the weather is terrible. Normally by myself in the week but at the weekends there are usually enough people out for a good skate. In the week I try and go skating first thing in the morning if it is dry. That way the parks are normally empty.

Are you planning on going to skate in the US or Europe?
I have never been the US for skating or anything so that would be really good to do some time. I have skated in Europe quite a bit for either Winterclash or NL contest in Strasbourg. I would like to get over to some places to skate a lot more street really. The Copenhagen street comp is something I have always wanted to go to but I normally don’t know about it until it has happened. Hopefully one day.

Talking Europe, I’ve seen a lot of UK skaters posting things against Brexit of Facebook, and I’ve seen Bristol voted for Remain. Do you think this could have any effect on people traveling to EU or to the UK to skate?
I would imagine anybody from the UK who has many friends in other European countries would have wanted to remain a part of the EU and be able to come and go between the various countries as easily as possible. This is particularly true for all the bladers who regularly travel to events and to visit friends and even those from the UK who live and skate in other countries. I don’t really know how these changes will affect all of that but hopefully it doesn’t make it too difficult for last minute blade trips overseas as there is so much more to see and skate.