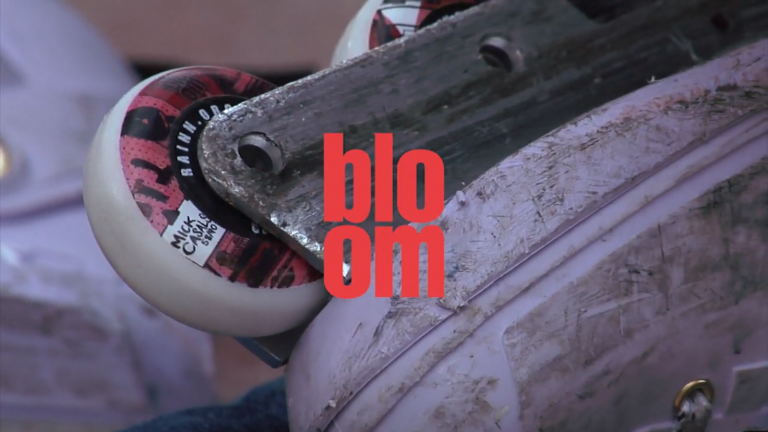 The Bloom Urethane company have just dropped their first line of wheels and one of the lucky recipients to receive their first signature wheel is none other than Mick Casals. Mick has been absolutely smashing everything in his path for a VERY, VERY long time and his elevation to pro status is much deserved and long overdue. In the promo video for his new wheel, which was perfectly scored to Dehd‘s infectious musical track “No Time“, Mick shows that he has an incredibly well rounded skill set which is equally matched by a superb spot and trick selection. Mick has also been a die-hard flat rider well before it became the norm so it only makes sense that he chose a round profile 58mm/90A for his wheel of choice. The wheel graphic features a unique design displaying a photography darkroom, which happens to be Mick’s home-away-from-home when he is not out shredding the harsh Texas pavement.

Bloom and Mick also will be donating 10% of wheel profits to RAINN.org, the National Sexual Assault Hotline. RAINN works with more than 1,000 local sexual assault service providers across the country and operates the DoD Safe Helpline for the Department of Defense. RAINN also carries out programs to prevent sexual violence, help survivors, and ensure that perpetrators are brought to justice. If you or someone you know is struggling, don’t keep it a secret. Reach out to friends, family, or an organization like RAINN.org.”

Words from Mick about his choice:

Hi All, Mick here, I chose RAINN for my wheel highlight. RAINN operates the National Sexual Assault Hotline, an organization I wasn’t aware of until long after my experiences with sexual abuse. As an adult, it’s a strange thing to come to terms with. Something I couldn’t comprehend until I was older. Yesterday or yesteryear, you can still seek help.