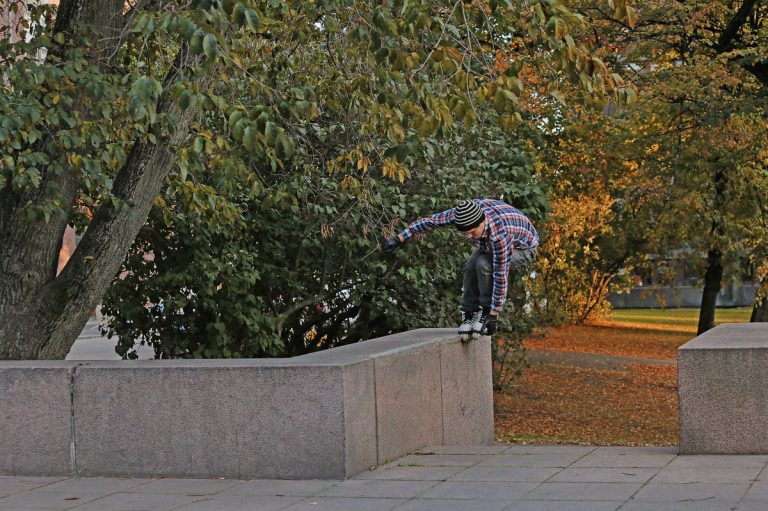 Konsta Kortteinen is one of first generation Finnish bladers, been fighting the good fight for over twenty years now.
Recently he got on board of Frame video magazine to make a project that would reflect the culture and philosophy behind blading to all audiences. He’s produced a remix of his section released on Frame 2 magazine, which we’re releasing exclusively on Be-Mag’s Vimeo account, after a long hiatus. Konsta says the Frame project was meant to explain why someone loves skating and is willing to take the risks of serious injury or even death: „Why you still love skating even you have a bruised body after years of practicing a sport that is obviously not safe. We also wanted to show that the hate is not real, and we showcase both skateboarding and rollerblading in this video side by side. The mindset behind it is so similar as the spots and the culture so no reason to think there´s a wall between skating and other extreme sports“.
Except for riding for Razors, he’s also a teacher’s assistant at a comprehensive school, where he works with ninth grade kids with special needs. Konsta filmed for the project mostly with Eddy Tihanen, the project manager, but also got few clips shot by my girlfriend Minna-Maija Brax. And other friends he skates with, such as Samu Hintsa, Samu Kukkonen, Georg Rokita and Anton Nyman, who also did all the audio work to the film.
„Main features in the video are Jyri Pitkänen (skateboarding champ from Helsinki and long time personal friend) Alex Lekinho (skateboarder from Brazil) Andy Kruse (rollerblading legend) and myself, and it also showcases many of our close friends skateboarding and rollerblading”, Konsta explains.

He decided to release a remix to show respect for his longtime sponsors Sunshine Distribution, Razors and Ground Control, and the Swedish Hanglosers, he’s always been close friends with. In his skating, he looks up to his idols Louie Zamora and TJ Webber, but also Dustin Latimer, Brian Shima, Jon Julio, Josh Petty and Franky Morales.
Asked about the influence of Damien Wilson in his skating, which might be obvious to some, Konsta says that he likes the comparison because of Damien’s unique approach to tricks.
If his plans permit, we’ll also be seeing him at this year’s Winterclash.