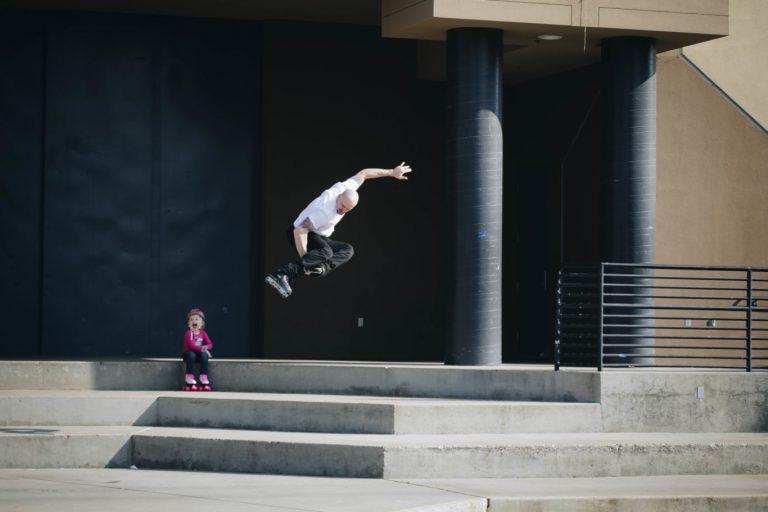 IN THE KNOW : DEREK HENDERSON

IN THE KNOW: DEREK HENDERSON

Derek Henderson is a beast on the blades. At 29 years old, Henderson is not only one of Razor‘s newest pro’s, he’s also a business owner of S9 Bearings, warranted enough respect to earn a place on Matt Mickey’s Intuition Skate Shop pro team, runs his own company for his 9-5, and most importantly of all, is a proud father. With his recent rise to professional status with Razors, in addition to his other fine attributes, we felt it fitting to sit down with Derek and get an insight into his history on skates.

Tell me a bit about yourself, aside from skating that is. Where were you born? Where do you live? What do you do for a living?

Pretty much born and raised in Fresno/clovis CA. I live in Clovis CA right now and I’ve been running a printing press the last ten years of my life to pay the bills. I hate it but I think I would hate anything other than blading for a living. At some point, blading became an activity of yours that in turn became a passion. When did you first get involved with skating, how old were you, and when did it become a passion?

Blading has never been an activity’ for me! At 7 years old I was a frail sick hospital kid who wasn’t able to do a whole lot. After my last heart surgery around 7/12 – 8 years old my mom bought a pair of generic rollerblades for me. My doctor at the time told her to let me do what I want for the first time! That’s why rollerblading has always been a passion, it was freedom! This is when I also realized I was a monster, not the frail lil kid I was before. It felt like literally being let out of a cage or bubble.

If you don’t mind me asking, why did you need to get heart surgery? Are you still prone to the same issues now?

I was born with a heart defect and they pronounced me dead on the operating table ! Than I said fuck that and woke up cause I wanted to blade ha. Turns out I was born with another heart valve that would trigger rapid heart beats of 300 plus a min and I would just pass out and wake up in the hospital , by the third surgery they successfully burned it close. Haven’t had any issues, they said it’s possible to start happening again at any time in my life and I would need a pacemaker if so.

I know you’re in your late 20s, so I’m curious to know how you keep yourself going with skating considering the level of stunts you do…is there anything in particular that you practice that keeps you going?

Haha I’m 29! But I get that all the time. It was cool when I was younger, now it sucks. I really don’t feel that I’m going big anymore? I really just want to keep doing this shit because I can’t stop! No matter what kind of skating that is , big or tech I think somethings wrong with me . I’m a ALMOST 30 year old man with a family and a lot of responsibility and yet I can’t sleep some nights because I’m thinking about doing tricks on my rollerblades! HA ! But I’m sure most bladers feel that way.

What’s family life like for you? When did you start a family? Do you intend on introducing rollerblading to your children? How does your wife feel about you skating?

I love my lil girl! She’s my fuckin world, being a father was the only other dream I had as a kid besides being a pro blader. ( that’s probly because I’ve never met my father ) I bought her rollerblades for her second birthday and we skate a lot! She’s almost fuckin 4 now!! Shit goes fast! I’m enjoying every minute though. How did S9 come about? What are your goals for the company? What can we expect from S9 in the next year?

S-9 was the hometown crew! If you made it in S-9 you were a badass! Fast forward about 20 years and I wanted to start a blade company ( what rollerblader hasn’t had that thought ) of course I was gonna call it S-9 ! S-9 is doing pretty good you can expect a lot more limited soft goods and shit in the near future!!

Tell me a bit more about the S9 crew. Who was originally apart of it?

S-9 crew was huge back in the day! Probably like 30 deep, I can remember skating around some of them when I was little and I was blown away. Joey IIhara was definitely the one who stood out to me tho, he went big and his style was unbelievable, we’re best of homies till this day. Same with the homie Josh Steinhauer, I’ll name some more – Rudy Caulderon- Mike and Matt Decker- Dave Hindmarsh- Adam Valdivia-Andrew Matthews-Adam Wilson the list goes on. ( no offense to the homies I didn’t mention the list is huge ).

I know you just turned pro for Razors. How long have you been skating for them and when did the opportunity present itself for you to turn pro?

I’ve been riding on the team for about 10 years. Been riding Razors for probly 15. Geoff Acers got in touch with me about riding pro just a couple days before I dropped the last edit I put out ha! The edit was done and it was just to put something out really because I hadn’t an awhile! He asked me if I wanted to ride pro and I was like of course!! I filmed that section in maybe 10 hours of blading. Went skating 4-5 times and they were sessions of maybe 1-2 hours #dadlife
I think people enjoyed it though!

With turning pro, do you have any plans on sections or video projects for the year?

Yes I have quite a bit lined up already. When you turn pro people start hitting you up ha. I’m just gonna shred as much as I can and have fun doing it.