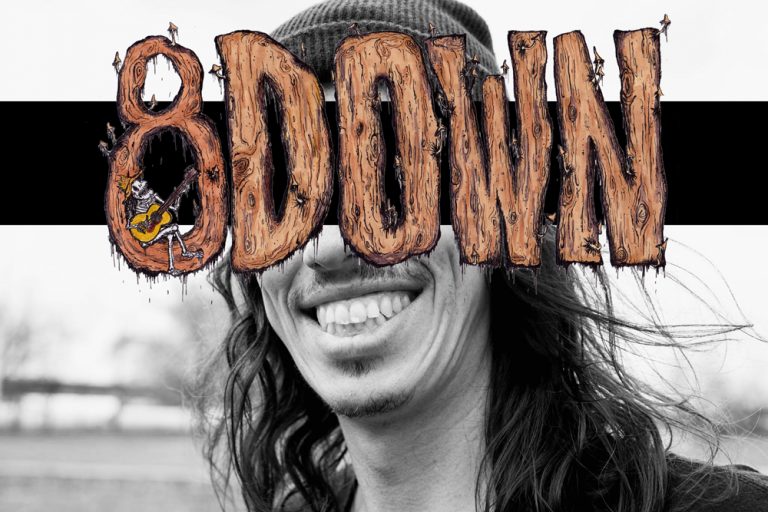 Mike Buckalew may not be a name you’re familiar with but it should be. As a lensman behind a myriad of incredible flicks from the days of Radius Media to the Shredweiser crew, this man knows how to handle his business. Taking notes from the likes of Shawn Engler and Charles Dunkle, Buckalew retains the same raw approach that you come to expect from the South. I took some time to talk with Mike about his latest VOD endeavor, 8 Down , his start with video, and what it takes to bang out a full-lengther.

8 DOWN trailer from MIKE BUCKALEW on Vimeo.

I’ve seen your name come up quite a lot in the past and I know you have had a history working with both the guys from Haitian and Shredweiser. Can you briefly explain how you got yourself involved in doing video?
Okay, when I was like 16 years old I bought a [Canon] GL1. I made a couple little edits, and then Shawn Engler and Charles Dunkle asked me to go on a trip to Florida to help film for Joey Chase‘s part in the first [issue of] Radius Media. From then on, I kept filming for them and just doing my own little things here and there.
Fast forward a few years and I moved into the Shredweiser house in Oakland with a new camera rig. I lived there for a couple years and filmed Shreweiser’s “Turn Down The Suck” with all the homies. I started visiting the Haitian gime down south pretty frequently until they invited me to come live there. I rode that until the wheels fell off and then basically started filming on my own again. How did you get introduced to the guys from the Haitian house? Was it through mutual friendships? Would
you say living with the likes of Malcolm Heard and Brian Bina that their approach to filming and skating in
general influenced you?
Right before i moved to Oakland and right before they moved to LA we all hung out for a weekend in Memphis. Shortly afterwards they dropped TwoTimes. I got super inspired and bought my first VX. Then after moving to CA, and living only six hours away from the death gime, i had to go visit pretty often. But as soon as they offered me a spot in the house i jumped on it because it was so nice to be apart of something with multiple filmers and photographers. Also everyone was ripping and just had a great attitude overall.

How long into skating was it before you started filming? And when did you realize that it was something you want to pursue further, at least in terms of producing videos and edits and the sort?
Well my first camera was a Hi-8 camera i bought from a pawn shop when i was like 12 or 13. Cool story it had a tape in the camera when i bought it of some naked chicks making out in a hot tub that happened to be at my old apartment complex hahaha. Anyway I made skateboard edits by recording the good clips onto a VHS tape and then dubbing music over it. As soon as i realized there is a much more efficient way to edit videos I was mesmerized. Then I got back into blading when I was 16, my friends introduced me to 3chip cameras and final cut and that was it. I know this video was a culmination of two years worth of filming that was paired with a handful of disruptions. What do you think is the hardest aspect of putting together a video?
The hardest part to me must be editing. I love to edit, but I am way too critical on my work, especially when I can review it 1000 plus times before it’s set in stone. I basically gave up on it for a little while, but luckily I was just in the woods with Seba and Dafick for a week and they really helped with finishing it up. I would love to work on some smaller projects in the future. I just think having the responsibility of a full-length video is too heavy for me.

Do you that that is often why people chose to focus on single VOD sections and edits instead of a full
feature?

Most likely. It’s also just really hard to get a solid crew that wants to be serious about a project. I would love to make a profile of just one person in the near future but not sure who is up for it. I see Parker Richardson assisted with the titles and art direction. Did you go to Parker or did Parker come
to you with the idea of doing that? It has sort of a vibe similar to that of Brandon Negrete’s Regardless, which I
really enjoy.

Well Parker and I have been pretty good homies for a while. I like his art a lot and one day I just asked him if he would be interested. He was super stoked and jumped right on it. Thank you, Parker, you are one of the sickest kids around! Do you see yourself working with Parker again in terms of art direction for future projects? What made you decide that you wanted to go in that direction of custom titles? I ask because it is often something that people do not fully consider, however I think it really does elevate and bring the project to an entirely different level.

If I need any artwork done in the future I will definitely be asking Parker for a hand. He has tons of potential and it’s fun for both of us. I definitely think it adds something else to the video. I think Citizens pretty much sealed the deal on me deciding to get titles made. That video was really sick.

So you have 4 main sections in this ( Ray Kronenburg, Matty Schrock, Phillip Moore and Taylor
Popham).Which of these sections was your favorite to piece together?
Ooooh, that’s a tough question, but I think I would have to say Ray. I have made parts of everyone else in the video in past years but I have never got the chance to work with Ray like that. He moved out to LA shortly after I did in 2016, so we really got to skate together a lot and he is always trying to handle business. Can you give me any highlight moments you had while putting this together?
I’d say one of the biggest highlights was just getting to travel a lot. This video wasn’t really planned, so getting to travel across the states and then to continue filming in LA was just perfect. I got to spend a lot of time with some really good people in the process of putting this together and I can’t wait to see everyone again.

What are the pro’s and cons you found with working with multiple filmers for this? Or were you guys pretty
much all on the same page when it came to expectations?
Well when it started I was just filming Matty and Phillip with no real plan of what i was going to do with the footage yet. Then Ray and Taylor came to visit in Alabama one weekend and we just decided to put all of our work together and try to make a full video. I was filming with my 2100 and they were filming with the 1000, so there is a slight difference in our footage which if I had a choice i would love for it all to be the same camera. Other than that we are all pretty much on the same page. Taylor and I have been filming and skating together for over 10 years so we are super comfortable working on projects together and definitely compliment each other. Is there anyone that you’d say inspires you in terms of your filming style or skating?
I think if anyone in the blade industry inspires me it would have to be anything Haitian has put out and also anything Amir Amadi has done. They all really know how to capture a spot and put it all together just right. Also Sizemore has always been a favorite. Damn, and Carter LeBlanc. I could list a bunch more now that i think about it haha. And of course Negrete had a huge effect on me growing up. Wouldn’t have even started back skating if he hadn’t caught my attention with Road To Nowhere.

I know song selection is a tricky thing these days, with copyright infringement being a huge killer for a lot of dudes. Is music selection something you had a hand in deciding or did you leave that up to each of the skaters, at least in regards to their sections?
I like to give the skater free range on picking music but if I don’t think it is going to work or compliment the skating I’ll try to go down another path. I definitely try to appease their taste and style as much as i think i can. I luckily haven’t encountered too many copyright issues yet… What is on the horizon for you now?
I really have no clue what’s on the horizon. I am going back to Alabama for a little while so who knows what will happen. Finally getting this video out has me excited to work on something new. You can purchase 8 Down here