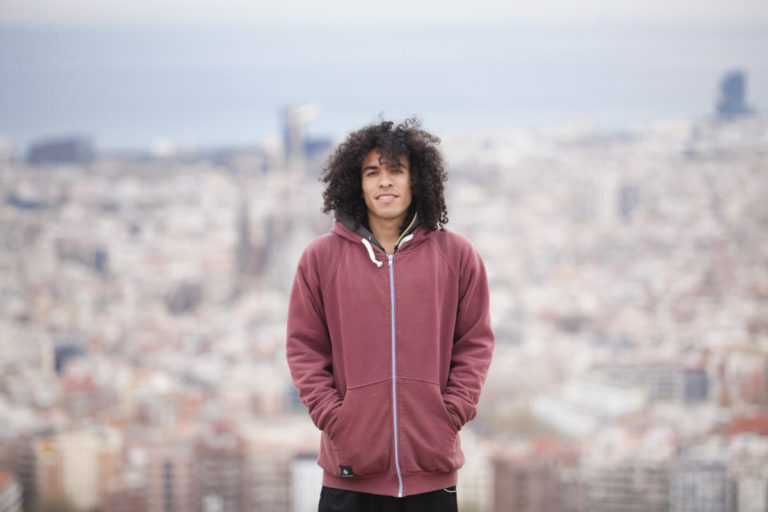 If Joe Navran was to ever produce a follow-up to the F.O.R. series, there is no doubt Michel Prado would be part of the cast. It might be the Classic Thrones, or the crazy switch-ups and rail transfers. It might be the fro haircut, or the hip hop tunes his sections are edited to. It might be the basketball shorts, or the ballsy stunts he seems to be landing with an easy-looking, yet cocky attitude.

The Barcelona resident is already skating pro for Kizer frames and Circolo wheels, and if he keeps on shredding this hard, chances are his boot sponsor USD won’t keep him in the AM team much longer… Thus we thought it would be right about time we pick the man’s brain, and get everyone to know him a little bit better. Ladies and gentlemen: Michel Prado!

First ever video you’ve watched: I still remember this day, it was Mike (Murda) Johnson’s section in Ego.

Favorite artist / band: I have no favorite band, I really like hip hop, but I like any music that’s good.

Worst city: Every city is good as long as you’re in good company.

Worst injury: Liquid in both knees.

Best trip in 2014: Malmo, Stockholm and Linköping, Sweden, where I ended up on the 2nd place in the skatepark comp.

Next trip: I’m planning a trip to Denmark for the Real Street comp, and Brazil at the end of the year if all goes as planned.

When did you leave your home country of Brazil and move to Spain? How did that happen?
All this happened because my father decided to move out of the country, as things in Brazil were not going very well. He first came in 2006 if I remember correctly and then brought the rest of my family in 2008. My father’s boss. Thanks, Dad.

You’ve kep in touch with your homies back in Brazil, being part of the Guerreros crew – who runs this company? Who’s part of the Guerreros Soldatos?
I still keep in touch with my inline family of  Brazil, I think it’s very important to always have close friends, even distant ones who are far away. The founder of Guerros is Santiago Gende Estellano: he is one of the most positive person I could find and I have the privilege to say he is my friend. He is always thinking about his skaters, he often calls me to ask how life is, and not only skating but in general, a real Guerrero.

What is Guerreros?
We are all Guerreros, it is a way of thinking, attitude, you never give up. Even if you can´t make it on the first try, you still battle to lace it, it doesn´t  matter how much does it cost. Not only in skating you have to think this way, but in general, in the everyday life of a person who does not have it easy. You have to struggle to reach the end of the month, that obligation to continue pulling ahead… It doesn´t matter how much it will cost and how complicated things are in life. Gaaaaas!!!

You now live in Barcelona – Who motivates you to skate and get clips in the city?
Barcelona is an amazing city, many people coming from other places do not believe the spots you can find in this city. For me it’s a giant street park, if you have the technique and a fairly open mind, you can take 1000000% advantage of almost the entire city and the urban furniture. And that motivates me to skate here, Barcelona is not a big city, you can take the metro and get off at any stop and you will find many spots. And so one day after another, there is always something new to skate, always a new spot, it is just a matter of going out to seek and find hahaha.

Can you tell us a bit about the Diamond Eggs crew?
Diamond Eggs comes from a Spanish saying: to land hard tricks you have to put your two balls, or two eggs first, put the fear aside. In order to land hard tricks, you need to have diamond eggs, not just regular ones, because diamonds never break ahah! Right now the crew is composed of Chino, Walta dos Reis, Carlos Bernal, David Montes de Aldea, Rafael, Erick, Oscar, Gorka Bajo, Yuri Botelho, Nacho, Carlos Campillo, Joni Prados, Marbin, Uribe, Sancy, Arly and Coke.

What’s been the most difficult part about finding new spots and keeping things fresh in Barcelona? Everyone comes from around the world and they skate all the famous spots!
Many of the famous spots are in the center of Barcelona, but if you leave the city you can find a variety of spots which are amazing for me. The thing is to always move around the side of the city and its surroundings, you will always find new places and beautiful things that no one has seen. 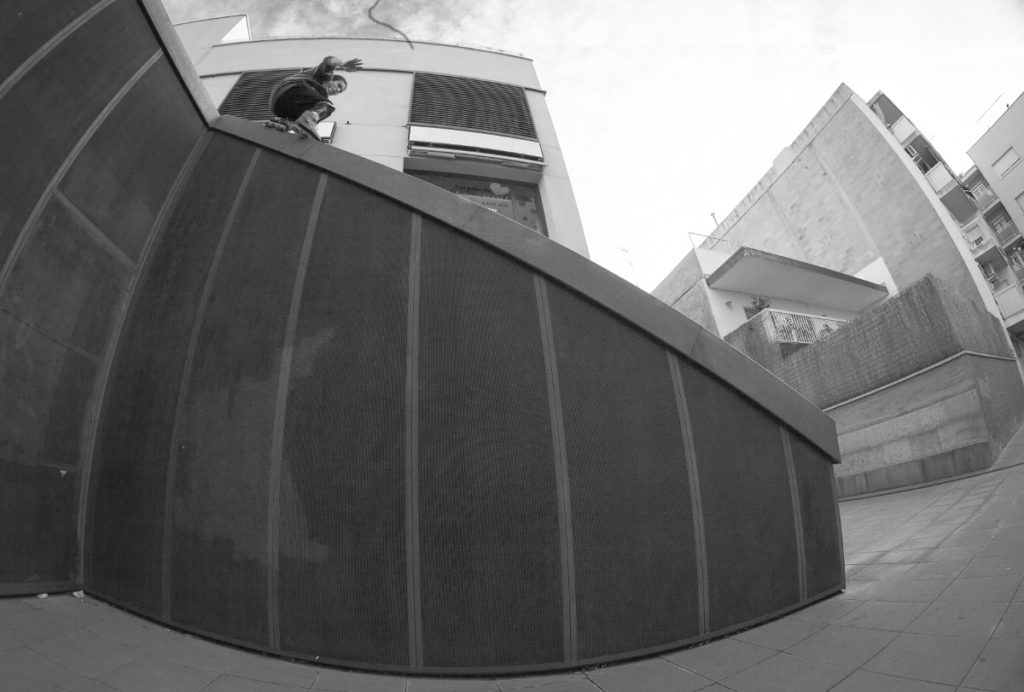 Your new pro wheels from Circolo came out – and they look great. What was the feeling you had whe they told you that you were getting a pro wheel?
First of all I would like to thank Circolo and Yuri Botelho. It is hard for me to believe that happened, I never thought I could get there. I always skated to try to improve every day and give my best, regardless of what might come. When I was told that I would get my first Pro wheel I felt very happy, for me it was a really big deal. I come from a very muddy city and just to think of where I would be if didn´t discover inline, it is surreal. And that to me, is something that brings me great satisfaction.

Congrats as well for your Kizer sponsorship. Any new frames coming out with Michel Prado?
Thanks amigo!!! It is a project that we were talking about with Kizer, and are still working on it. If all goes well, we will soon have a Michel Prado Kizer frame.

You are now working as a sushi chef – how did that happen?
I always liked Japanese food, and always wanted to work in a kitchen and learn Japanese cuisine. I was looking for specific schools to learn, but unfortunately it is very expensive and my financial situation did not allow me to pay for a school. Then one day I decided to go and ask every restaurant if they could give me a chance to try and learn, but all declined. Their staff were are full, until one day a good man who owns a small restaurant where I live offered to teach me. I said: “my name is Michel and I would love to learn how to work in the kitchen, and learn the art of Japanese food. If needed I will work the first months for free, but I really  would like to learn”. To my great joy he said yes, and I started to work as a kitchen helper. At the beginning I wasn’t paid anything, I just went there and helped the sushi-men who were there at that time. Until one day, the sushi-man got another job and I got his position, he gave it to me, and thank God I now work as a humble sushi-man in a Japanese restaurant.

Any big video sections planned for 2015?
Yes, of course, I always want to try to give my best skating. I’m recording session being now say somehow, overall mental improvement, I intend to take my session with the hardest and best I can do.