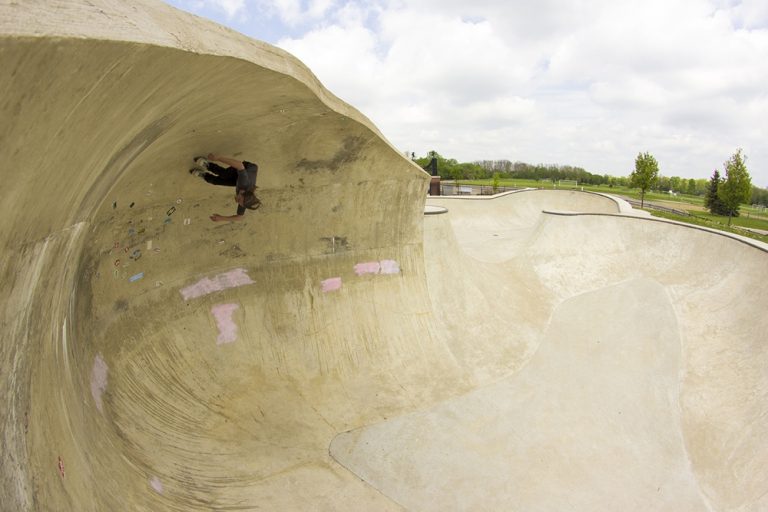 He’s been shredding the transitions of Modern skatepark and destroying the streets of Detroit for quite some time now. As a matter of fact, Brian Weis has been blading for 15 years, but his name has only started to spread out recently. This might be due to his namesake Ben Weis stealing the show before that, but now that he’s been featured in several SSM edits, placed in a few street contests, and starred in the Cereal series, Brian really has made a name for himself. Years of hard work and intense blading have paid off, and he’s even added Ground Control to an already impressive list of sponsors. His GC13 Watchlist edit is just about to drop, and as Brian is turning 27 today, we thought it would pretty much be the perfect time to take a look at what’s inside that boy’s head, so read on! Currently living in: My Bonneville First ever pair of blades: Some random rec blades but my first aggressive blades were RB swindlers.

Best job: Trimming, anything working with animals or anything behind the lens.

Favorite city: Probably one I haven’t been to yet, but if I had to say it would be San Francisco.

Worst city:  This tiny shit town in northwest Indiana that considers the pup Hank and I criminals. Favorite terrain to blade:  Anything I can soul grind, wallride, and anything that gets the heart pumping. Got to have that feeling.  Cement parks with the boys. Also spots that make you think and you have to use your brain. Weird but I don’t really have a favorite just depends on the mood that day.  New spots and skating with friends is always motivating.

Next video part you’re filming for:  GC 13 edit, SSM edit and a Haunted edit for my upcoming wheel.

What is it like living in Detroit, and how’s the blade scene over there?
Right now I’m actually right outside of the city by a few miles but it’s awesome here. I work in the city, skate there and I’m pretty much there more than I’m home. Well shit it is home. Anyway, the scene here is amazing. All the Motortown Classic dudes hold it down organizing events and making sure we have shit as a community to be a part of. We also have a solid crew of youngsters which is hard to come by these days. They are all ripping hard skating all the time and have been making it out to a ton of events this year. It’s so sick to see that. Especially when things are in the state they are in and to see those guys that stoked on blading is a good sign. Shit, seeing that is what keeps me doing what I’m doing. That’s what will help rollerblading – actually being a part of it. It’s motivating and reminds me what it’s all about.  Not to mention we have countless free cement/outdoor parks and of course Modern Skatepark. They have a shop that’s fully stocked with blade stuff which is also hard to come by these days. It makes the univeral goal of getting new people on blades a little bit easier.  We can throw events there, we have a ritual Wednesday night skate during the cold months so yeah there’s a pretty healthy scene here.

What was the process of filming the Cereal Series like, and were you surprised by the reception it has gotten?
Great man. I was so stoked when Don picked up those blades again and as you all watched it was like that fucker never took them off! We honestly didn’t take it too serious at all haha, hence the name. We wanted to do a full park part so that was about the only criteria we had. We tried to go out have fun, try new shit and film it. Do something different and learn about the otherside of the lens. There was no pressure on it either, when it was done it was done.  We didn’t care if it took two winters we just wanted to be happy with it ourselves. Not to mention we both had/have sponsors and some times pressure gets put on certain things like filming, tricks, traveling, etc. We wanted to do something that was totally our own without any of that. It turned out great and yeah, we were very surprised at the response, it was pretty crazy. But that’s what happens when Ben Weis has the ender;) We want to keep going with it so I’m sure something will be in the works. You’ve been on board with SSM since they started, how did that come about and how has the relation evolved since?
I have a great relationship with Shima and all the dudes on the team, everybody is cool as fuck and we all share the same views on blading. As far as the beginning, I took a trip out to Oakland with Nick Norton (Lowlife) to hang with all the Shredweiser dudes right around the time Nimh was done. I filmed a bunch of stuff out there and showed them some stuff I was working on at home. Long story short, Shima ended up seeing all of it and asked me to be a part of the team. Also that a/o soul transfer soul clip on that kink bar in Oakland probably helped too haha.

How were your recent trips to ATL and Woodward West ? Any crazy stories ?
Woodward West is always a goodtime! Miguel is the fuckin’ man and you can’t beat being able to skate all day every day and be with the youngsters. I didn’t skate the Mega as much as I would have liked but I’m definitely going to make that a priority next trip. Oh and how could I forget, we saw a deer take a shit haha, doesn’t sound like much but I feel that’s a once in lifetime deal. Atlanta was a blast I really like it there a lot. Amazing people and good vibes. Carson and Brian threw an amazing event and I was happy to make it down to support their efforts. I will definitely be coming back next year. Plus I got to jump into and grind a boat, have to say that’s a first after 15 years of blading.

What’s next for you? Any specific projects in the works?
Well first off continue to be on my blades as much as possible and have the most fun I can. Try to film and document it all, put out content for those who support me and try and travel as much as I can. I’ll be out in California at the end of October, then to Blade Cup after. I’m going to be working my butt off in the meantime to save up for a Europe trip next summer (fingers crossed). I worked on a GC13 edit that will probably be out soon by the time this is live. Other than that I’m going to be filming for an SSM project as well as a Haunted edit for my upcoming wheel.  Just trying to enjoy myself and have fun!

Shout outs?
Freddy and Be-Mag for the interview, all my Detroit blade homies, out of town blade homies, Shima, the SSM homies, Michelle and my family. Thanks!