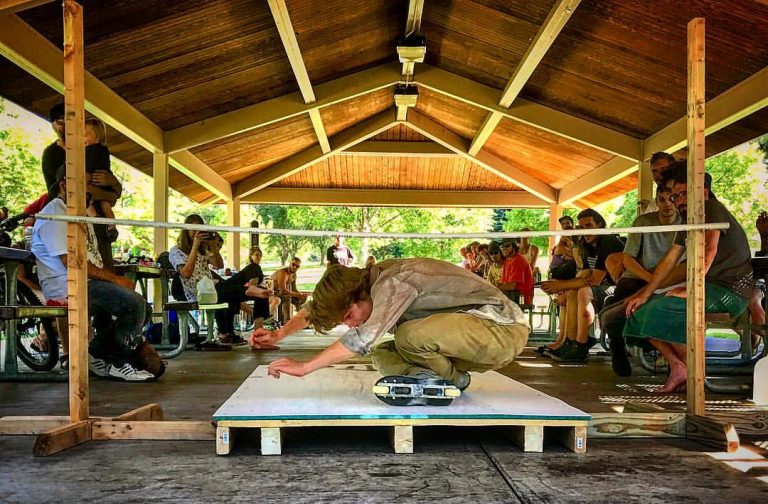 FOR YOUR CONSIDERATION: SMILEY & DOM’S BBQ AND THE RED QUEEN HYPOTHESIS

Every summer “Smiley” Jason Mosley and Dom Montoya run a BBQ and skate event here in Colorado. It was designed originally (simply) to get the folks from Denver (and elsewhere in CO) to go up to Fort Collins to skate with Smiley and his crew. Despite being only a mere hour’s drive from Denver, people down here rarely make the trip up there. So Smiley took matters into his own hands and has organized (for seven years running now) a little something extra to sweeten the deal to get fools to go up to The Fort: free food and family fun.

Smiley’s wife Kelly Tucker is a seasoned (and exceptionally tolerant) gal who helps put on the event. If you happen to be a ultra-blade nerd like myself, you may recall Kelly as the gal who wrote the Girlfriend’s Guide to Dating a Rollerblader blog some years ago. To me, it’s a legendary contribution to blading lore, on par in its worth and acuity with the best literary offerings blading media has ever put out. Kelly, if you’re reading this, please consider writing more entries! We haven’t seen an entry in four years!

Anyway, in addition to her wonderful blog, Kelly’s deviled eggs are legendary—even though they’ll move through your colon like a pine cone. Smiley and Kelly’s daughter, Hayden, is a burgeoning young rollerblader herself, and their presence provides the impetus for the event to be family friendly—even though weed and booze abounds.

Now, anybody who read my article last year about the Colorado Road Trip knows how much I loathe “blade event write-ups”—so that’s not what you’re going to get here. To save time, here’s the quick-sheet on the event. Smiley is dope and in general runs the thing. Dom is dope also and he’s a rad rollerblader and he runs the grill—cooking up like 300 hamburgers and hot dogs for everybody. Kelly is dope, and she does double duty by putting up with Smiley.

Here’s a rad and fun-filled edit that Ant Medina and The Foogasaur made covering the deal:

Obviously, Ant and The Foogasaur are dope, too. You know, obviously.

Now, onto the rest.

The problem I have with Blade Event Write-Ups is that they rarely have anything to say—spare on the insight and light on the beef. Several years ago I promised Smiley a “write-up” on his BBQ and I couldn’t ever bring myself to do it. But now, a couple of years later, I feel like I’ve got an insight worth sharing, so the rest of this piece is going to be dedicated to that.

So here’s the deal. Rollerblading is exceptionally complicated. I’ve said this many times and in many places, and it’s a pretty obvious observation that will surprise absolutely no one.

Nevertheless, the advent of grinding in rollerblading led to a kind of arms race for us to do ever-more-complicated tricks. Illusion spins, alley-oop spins, debates about whether you can true-spin to a frame trick—all that—it’s just not the kind of thing somebody’s mom or stray homeboy cares to understand. You need a humongous amount of schematic knowledge of rollerblading to comprehend and appropriately appreciate the complexity of the kinds of tricks that are being done these days. And, a lot of the time, this is why people who don’t rollerblade have a hard time appreciating it or even understanding it.

Now, this is absolutely not a comment about “saving” rollerblading or any of that swill. It’s about why reducing the cognitive load for spectators helps make an event more fun for non-blader friends and family.

There’s a great theory from Evolutionary Biology called The Red Queen Hypothesis. If you want to read more about it, consider (at a minimum, perusing the Wikipedia article on the topic: https://en.wikipedia.org/wiki/Red_Queen_hypothesis).

The short version is that organisms often have to expend huge amounts of time, energy, and effort to grow and adapt, despite not really gaining anything for all their trouble. Hence the name of theory (from Carroll’s Alice in Through the Looking Glass): “Now, here, you see, it takes all the running you can do, to keep in the same place.”

Imagine it like this: suppose you’re a tree in the jungle, and you grow tall to reach the sunlight at the top of the canopy. You’re doing fine and getting all the light you need to do your thing as a tree, but then the other trees start growing taller too so that they can crumbsnatch some of the light from the sun that you’re getting. So you grow taller to keep the bastards from taking away the sunlight that you were originally getting. Then they grow taller, and you have to grow some more just to keep getting the same amount of light you were getting before. The problem is, you have to spend a lot of energy to keep growing taller, but you don’t get anymore sunlight for all of your hard growing work. In other words, you have to keep running and running just to stay in the same place.

Rollerblading is just like that, and, as a result, our tricks have gotten ever-more complicated without becoming anymore accessible to a spectator.

So, if you want to keep the cognitive load low and the family fun high, you do what Smiley and Dom do, and include something that everybody can understand. In the beginning, they were doing a high jump contest after the food portion of the event. It’s brilliant because it made the event family friendly by making rollerblading accessible to anybody. There was no ramp, no launch, just a bunch of dudes skating up and jumping over a pole. Everybody can understand that. People who know nothing about rollerblading can look and see with their plain eyes that homeboy A jumped higher than homebody B.

As a consequence of this reduction of complexity, spectators can focus on schemes they’re already family with—like style and personality—without having to understand anything about the complexity of modern rollerblading. Two people I brought along with me this year remarked, “So-and-so was really entertaining to watch—he looked like he was having fun and he made it look super easy!”

You hear things like: “Wow, he did it backwards” and “Holy shit, that guy did a spin over the thing.”

This year, with the high jump having gotten a little stale, Smiley opted for a cess slide limbo contest. It worked better than expected and the dudes had a lot of fun doing it. But more importantly, it kept the cognitive load down for the spectators—you really don’t have to understand the nuances of cess sliding, other than to know that the dudes are doing something special that THEY understand—and that the contest is to get as low as possible. The guy who did the thing and got the lowest, wins. Easy peasy.

Here’s a great shot of Dustin Spengler doing one of the winning cess slides (he later won the whole thing). Credit to Justin Barr who snapped the great shot. Here’s another hilarious of Jarrod Banning just for the laughs. Credit, again, to Justin Barr. So, in the end, rollerblading is made more accessible and fun to watch if you can borrow from a scheme that spectators already know. If passers-by see a rollerblading contest in a skatepark, they may stop by and tell you that they’re impressed, but they’ll never (or rarely) have enough background information to comprehend why the crowd cheers for a 540 and not for a front flip. With something like a Cess Slide Limbo contest, the spectator doesn’t have to understand the Cess Slide portion because their Limbo schema can take over and fill in any blanks: it’s a contest, they are rules of some kind, and whoever gets the lowest wins.

Therefore, if you’re going to put on a family and friends accessible blade event, it may be worthwhile to consider including something with a comparatively low cognitive load—whether it’s high jump, limbo, or some kind of balancing contest. Just food for thought.

As always, thanks for your consideration.