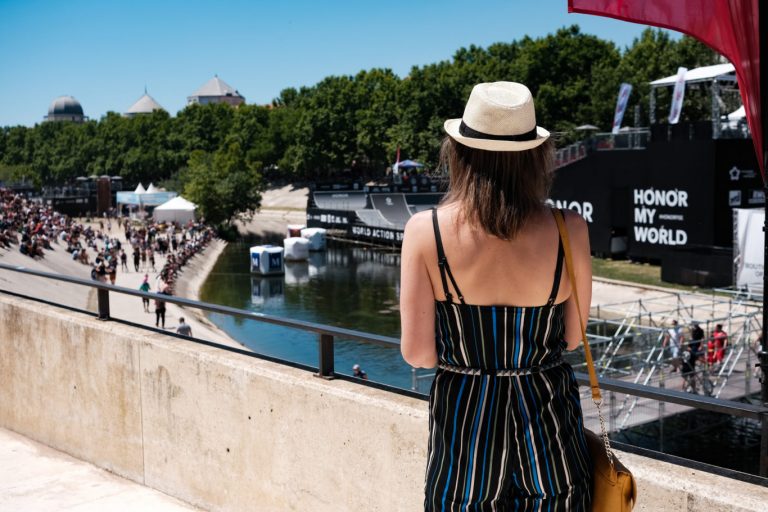 More than half a million spectators, 2000 registered athletes and too many competitions to keep track of: Welcome to Montpellier for the FISE‘s 23rd edition! But who’s really counting anymore… Perhaps some of the 400 journalists covering the event, among which Be-Mag’s special reporters who this year again, will try their best to bring you all the fresh updates from the non-stop blading action! So read on, and stay tuned for more! We’re already a couple of days into the event, and the level is rising steadily. After a qualification round on Thursday which saw the best 24 riders qualify for the pro semis, yesterday was the day for them to prove their worth for a chance to grab one of the top 12 spots available in the finals! With a big upset for fan favorite Diako Diaby, and Joe Atkinson qualifying in first place after trailing most of his heat, things definitely promise to be interesting in this evening’s finals!

The bladies also killed it on the Freestyle Park, and will now have a couple of sessions to refine their lines until Sunday’s big finals. Yesterday’s action closed with the spine ramp pro competition, a bit early to recreate the insane atmosphere of previous nighttime editions, but packed with high-level skating nonetheless. Check out the results over here, and jump in with photographer Thijs Tel for a complete recap of this sunny Friday: With temperatures hitting the 30 degrees Celcius in the Montpellier sun,
the FISE crew makes sure there’s enough water for all the riders on the course. Felix Falling getting ready to drop in for his second run of the semi finals. Roman Abrate is looking on as the other riders are skating their runs.

Joe Atkinson and Yuto Goto inspecting the course before their respective runs.

Russian rider Grigoriy Lobko waiting for the score of his second run to come in. Jaro Frijn was transferring back and forth between obstacles during his second run of the semi finals. Jaro Frijn reacting to his first place in the ranking after his second run. French powerhouse Romain Godenaire took a fall during his second run and enjoyed the sun for a bit. Felix Falling flying high during his second run of the semi finals. Felix Falling shows off his unique tweaked 360 during his second run of the semi finals. Japanese style master Yuto Goto was one of the only riders to touch the rail during the semi finals. Yuto Goto showing the crowd how an alley oop fishbrain should look. Diego Guilloud from Switzerland raised the bar by grinding part of the VIP stage instead of the course. Mr Joe Atkinson on the rainbow. Australian CJ Wellsmore with a soul grind on one of the subboxes on the pool corners. Joe one-upped Diego Guilloud with a smooth topside soul on the fence of the VIP stage. The other riders look on as Diako Diaby shows the crowd his unique high-amplitude skating style. Being a judge is hard work, running from one part of the venue to the other to be in time to judge the next contest.

Jeremy Melique with a super tech 360 soul grind during the Mini Ramp finals. Sometimes things don’t go according to plan and you end up next to the ramp instead of in it.

But the fall wasn’t bad. Joe Atkinson using his creativity to take the win in another contest. Joe was happy with his runs.