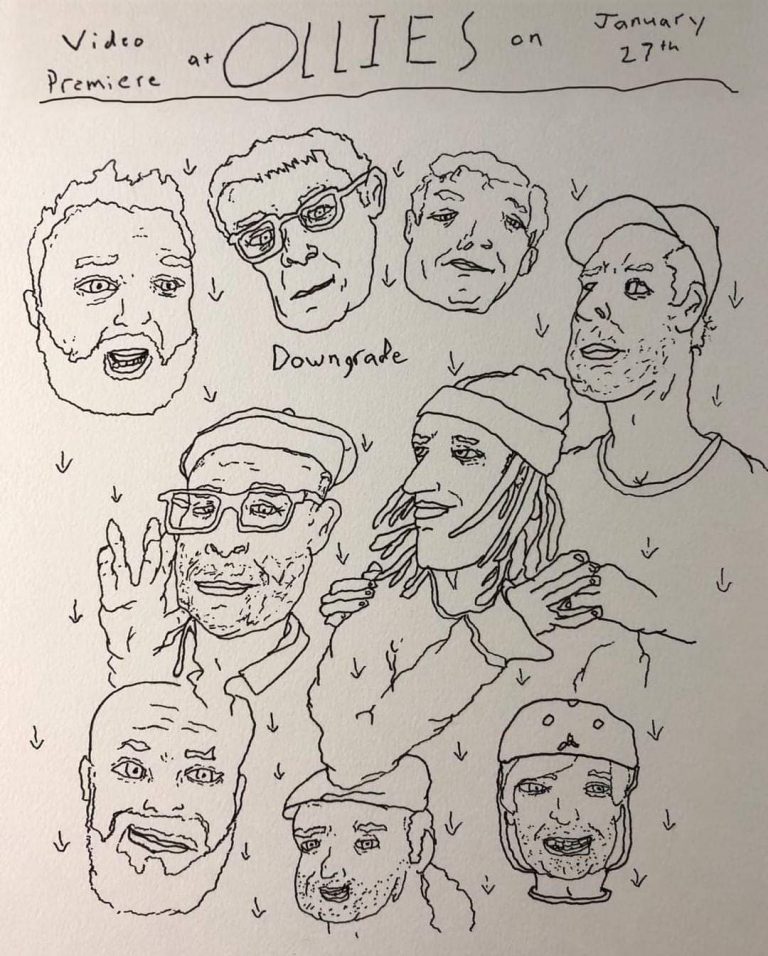 Downgrade is an apt misnomer of a title for Ryan Benner’s latest video, which premiered at Northern Kentucky’s Ollie’s Skatepark on Sunday, January 27th.

The title fits because, while the blading may be down a few danger-levels compared to 2006’s Upgrade (his first video showcasing Southern Ohio rollerblading), the tricks are no longer graded on the same scoresheet.

That’s because what counts as a trick in the rollerblading world has changed. Benner and those he skates with have embraced these changes rather than allowing a nostalgia for hammers nail the coffin shut on creativity. 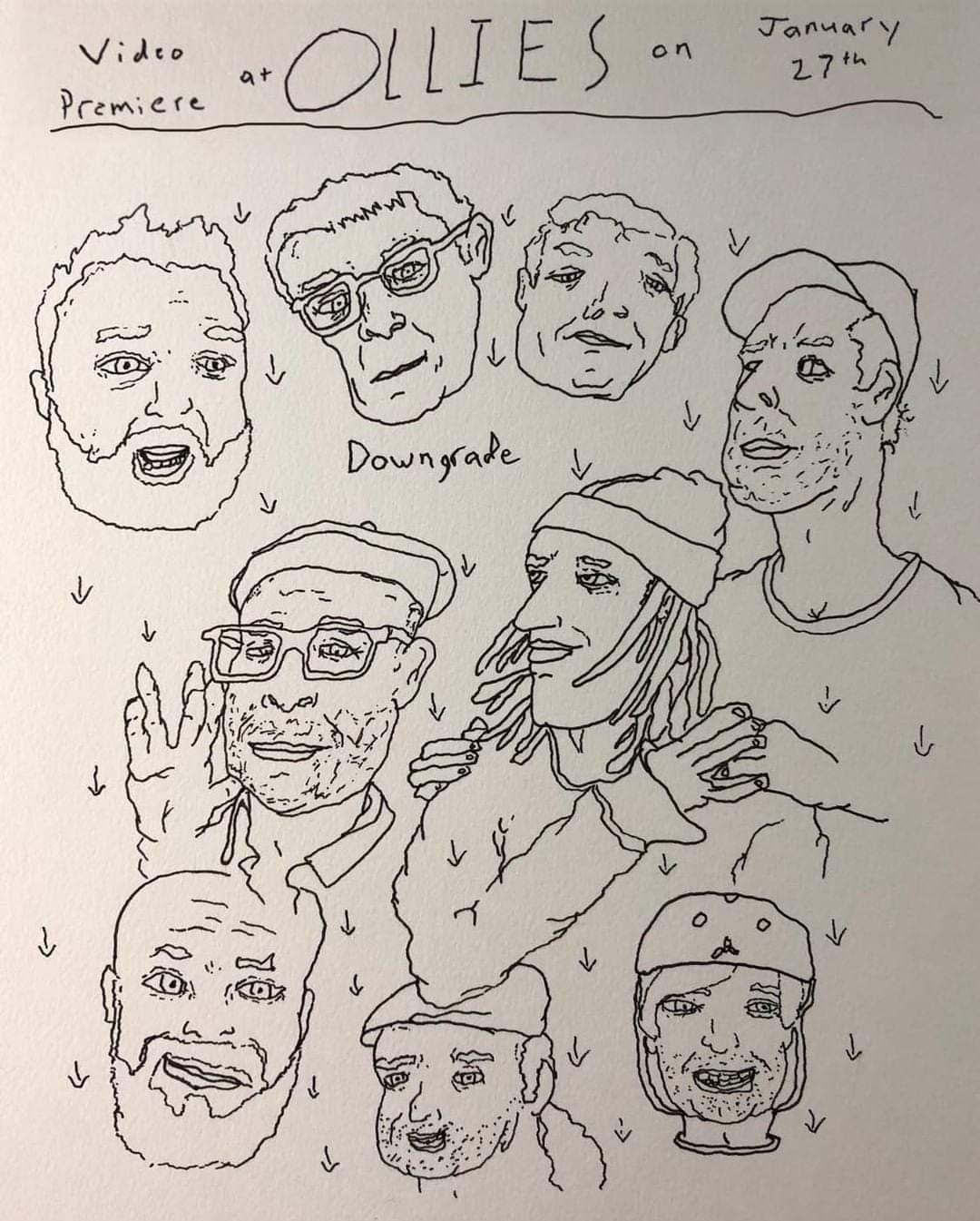 Artwork featuring the bladers in Downgrade by Elliot Feltner

While central and northern Ohio tends to focus on stunts and steez, southern Ohio blading has always had a more diverse trick vocab due to the influence of Cincy-native and Chicago transplant Tri Rudolf, whose ankles and knees seem to bend the very laws of physics, and Middletown local Aaron Pyle, whose fast feet make five-second clip a five-plus-trick combo with spins.

In the first Savor videos, southern Ohio blading matched their northern neighbors—the rails, gaps, and switch-ups were as big as the pants. Ben Corwin oozed steeze with low back roys while Andrew Thompson hucked huge gaps, including one of the sickest forward 7s ever done.

In later incarnations, the flavor is more nuanced and sophisticated (likely due to thinning hairlines and expanding waistlines), but the skating is still something worth savoring. To whet (and then satiate) your appetite, here are links to Benner’s Savor the Flavor videos: Vimeo channel and YouTube channel.

In the lastest videos, the earnestness is still there, but now there’s a lighthearted self-confidence in the goofiness inherent in riding and grinding obstacles in wheeled boots. This approach is so refreshing in the blading community, which tends to protect itself with pretentious defensiveness. 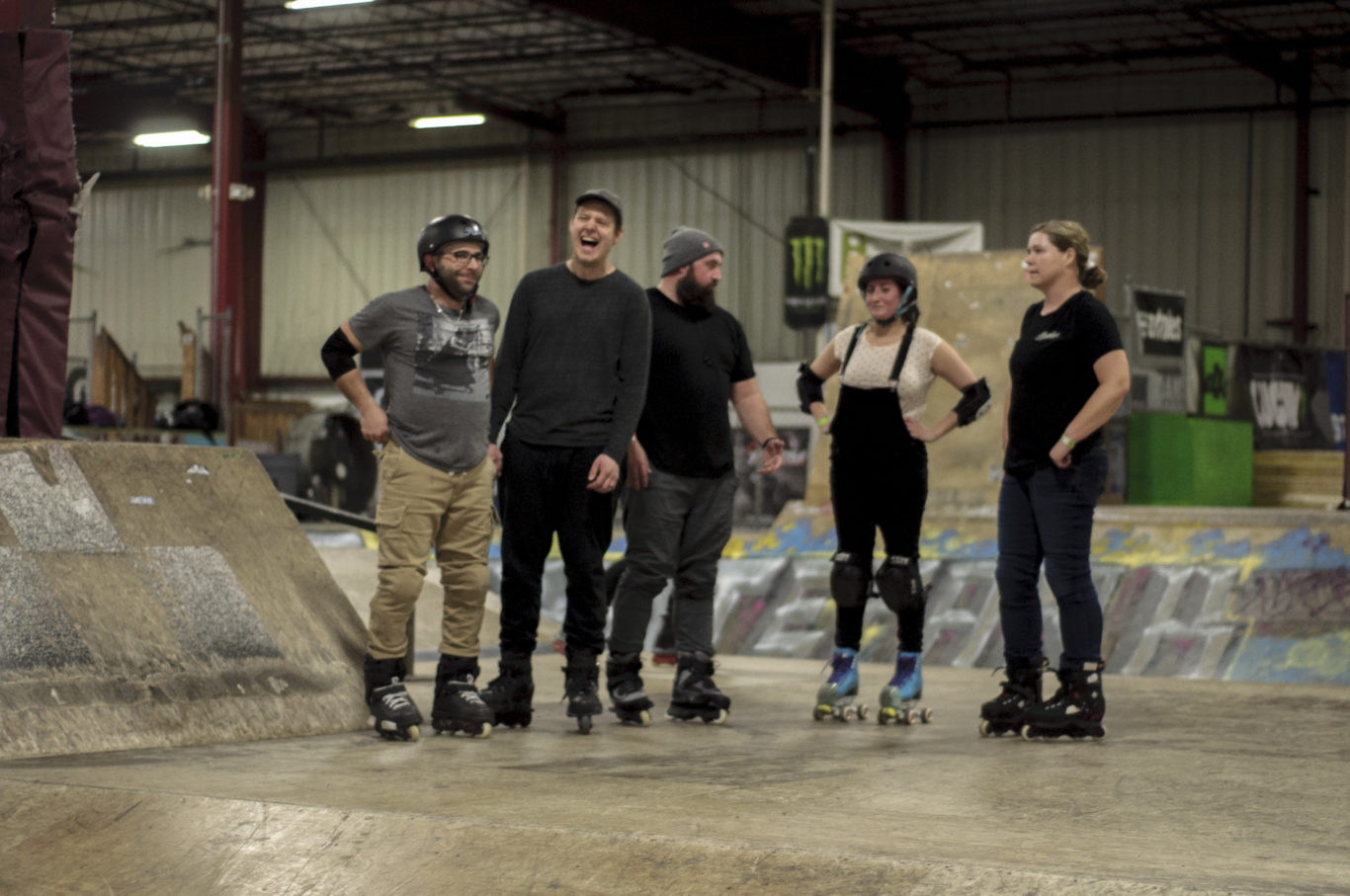 Thanks to the influence of Mushroom Blading and big-wheel blading as well as the support of Flying Eagle, Benner and his preferred filmer, Tim Sloan, have helped refine a style of rollerblading that adopts and adapts diverse disciplines.

The video premiere drew an eclectic group of 25 or so rollerbladers from Ohio, Kentucky, and Indiana as well as a crew of southern Ohio rollerskaters. 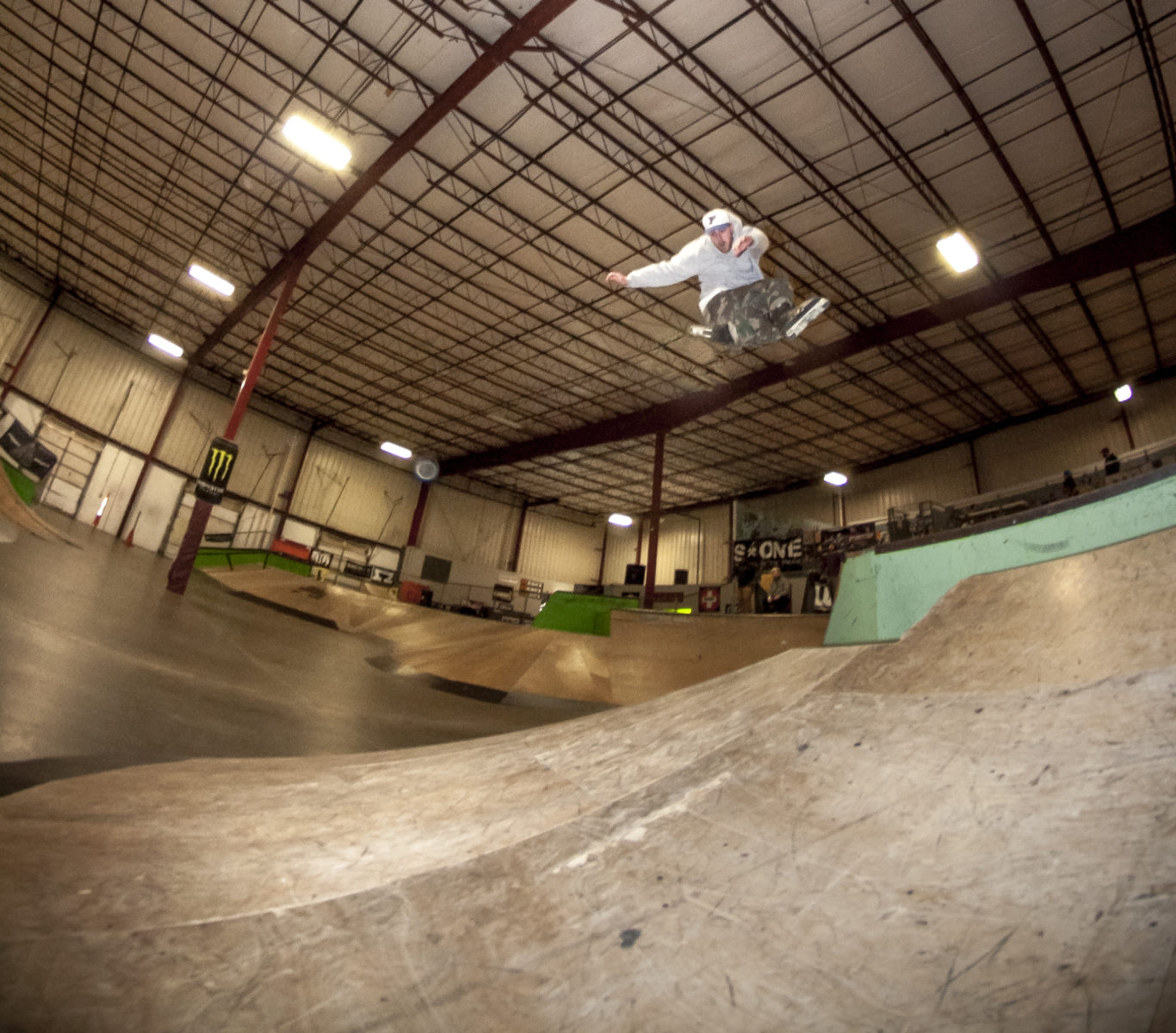 In homage to his fancy for felines and cat memes, Benner begins each section and subsection of Downgrade with a cat capturing the style or personality of the skater.

The shady tomcat belongs to Reed Huston, recent winner of KSPS and Benner’s protégé, who starts the video off with shirtless steez and sultry plus-one slides. His effortless style is unforced and fluid. 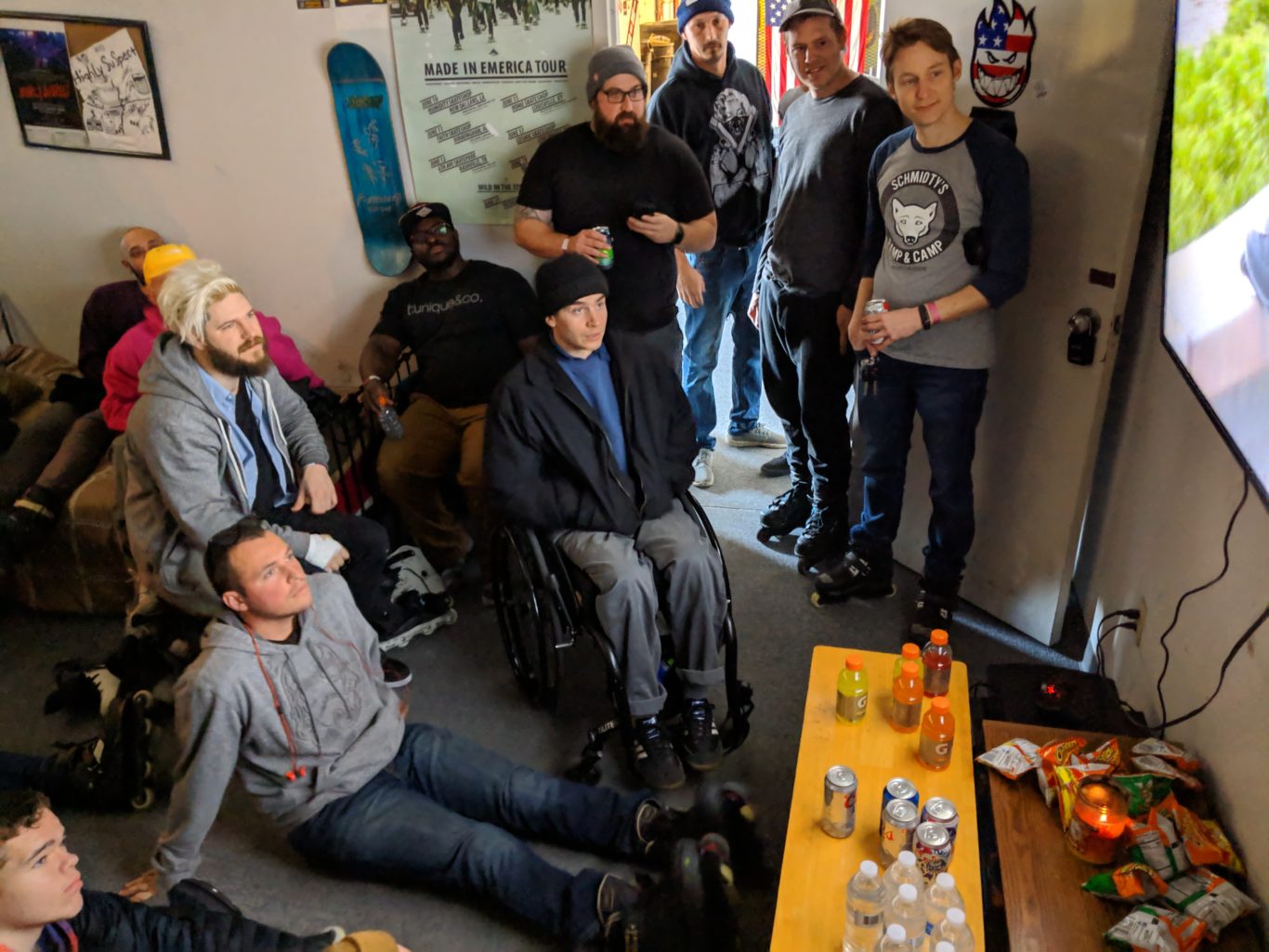 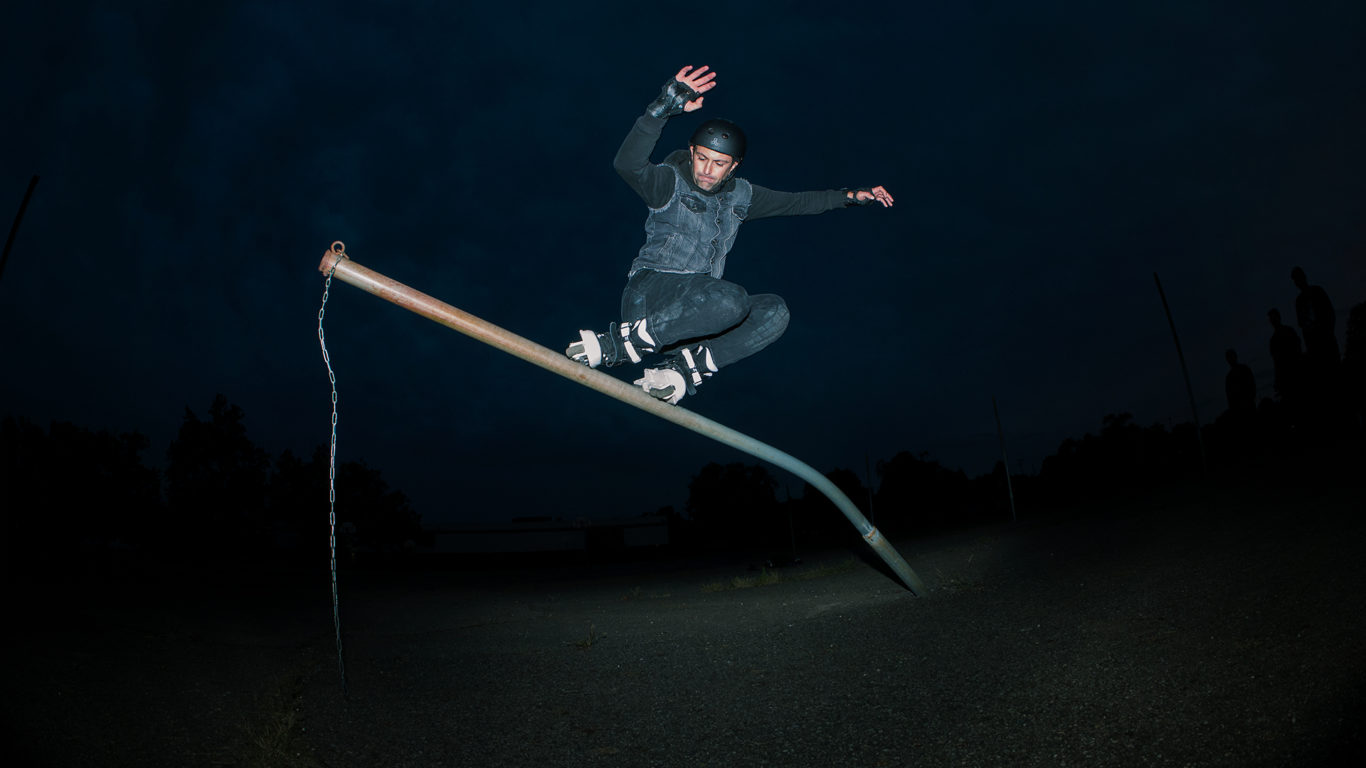 Brandon Ballog with a front roy up the tetherball pool. Photograph by Tim Sloan.

The next section is split between the Dark Prince of Emo, Brandon Ballog, and bookish bobcat Eric Comeras (yours truly, reader). Ballog is arguably the most consistent skater in the Columbus, Ohio scene because he laces most tricks first or second try. As an accomplished graphic designer, Ballog approaches skating like an art form: his aesthetic is mirroring tricks with precisely spaced lines (and font)—natural, then switch, forward, then fakie.

I’m the oldest blader in Columbus and just lucky that my knees still bend. 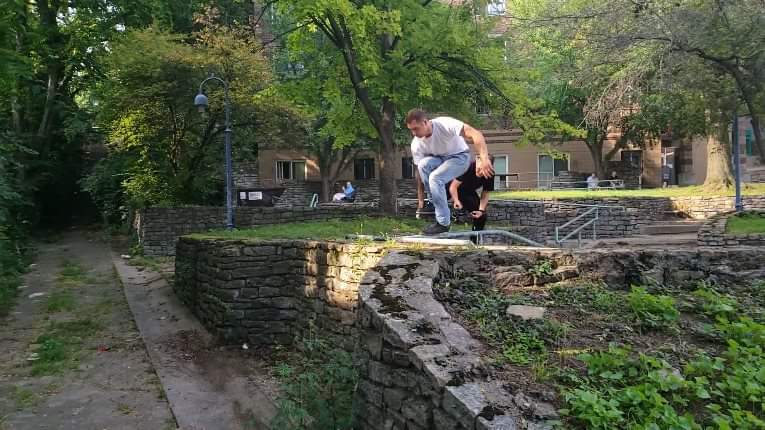 Reed Huston with a fishbrain to 180 gap. Screengrab via Ryan Benner. 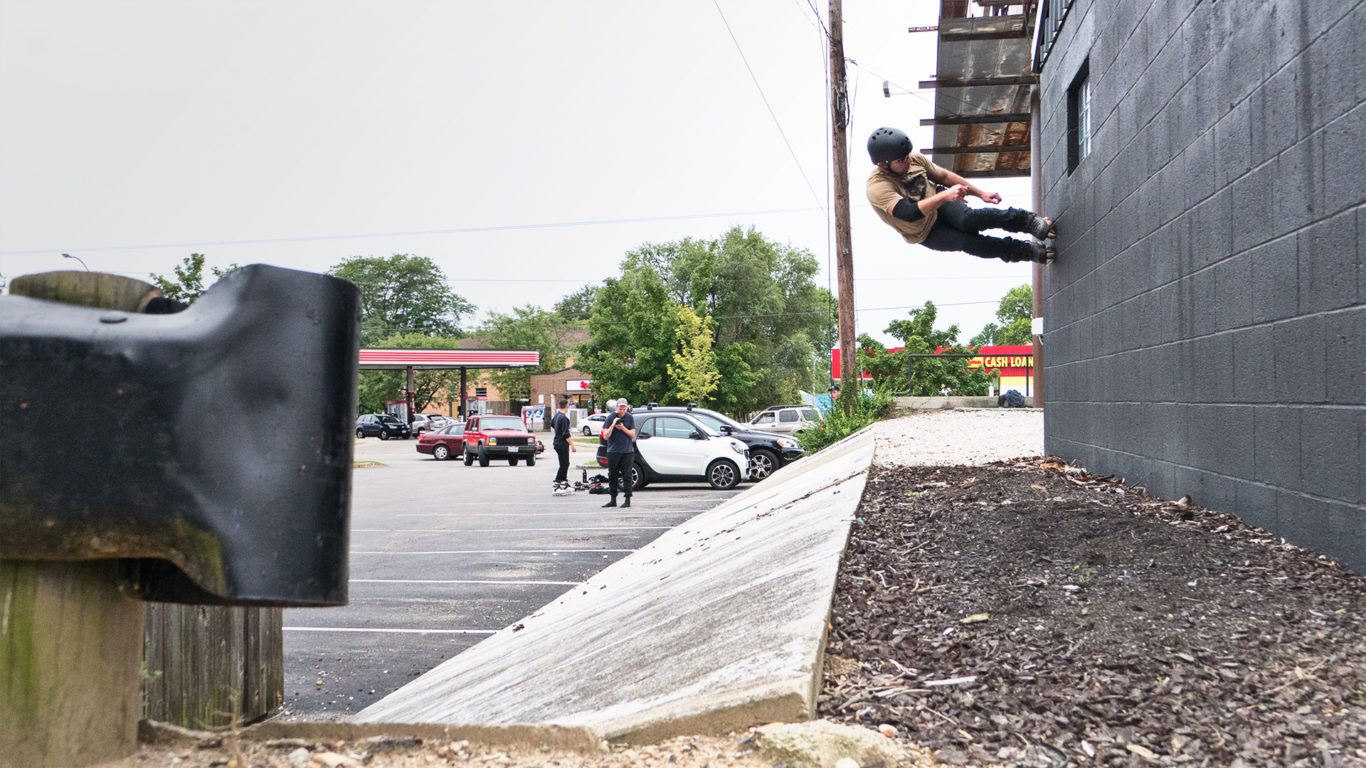 Eric Comeras with a bank to wall stall. Photograph by Brandon Ballog.

Kyle ‘Guam’ Jordan, aka Catnip Ninja, offers up some of the video’s most unique maneuvers. To truly grasp the slippery complexity of his trick combos, you simply have to hit pause and slow it down. His moves are controlled chaos on another plane of existence, and just when you think the trick is over, he spins one more time, slides one more cess, or grabs a prop to incorporate into the clip. 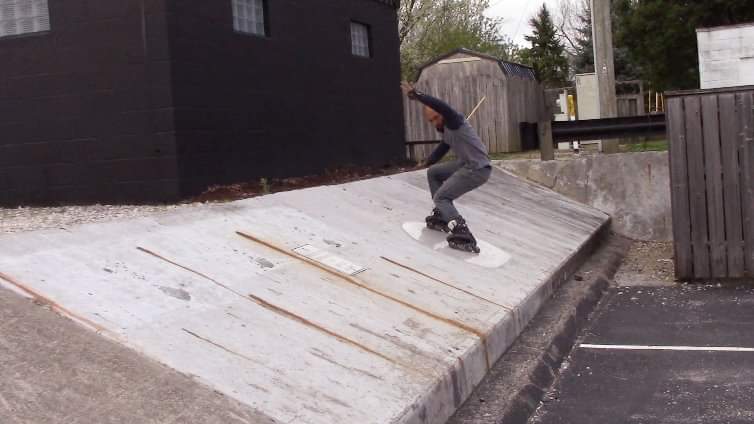 The penultimate section is split among four Ohio bladers. Gamer gato Ryan Benner shares his screentime with techno tabby Tim Sloan. The styles of Benner and Sloan, two close friends who skate together weekly, are heavily influenced by Mushroom Blading and even freestyle and slalom. Benner is a tactician of subtlety, making the most of each spot, riding, grinding, toe-tapping every last ledge or crack.

What makes Tim’s skating compelling is that most of his spins and toe-taps and rolls don’t yet have names. The operative word is yet because, as Tim proves through his skating and his keen eye for close angles, the future of rollerblading is a synthesis of styles, a return to our humble beginnings where the line between recreational and aggressive blurred, and nameless tricks were the name of the game.

The second half of the section is split between Def Leopard lookalike Vinnie Fox and limber lynx Matt Lyon. Vinnie’s skating is 80s glam rock: like a lead guitarist with his axe, his solos are complex riffs, involving the full length of the instrument, whether rail, ledge, or bowl. Lyon, known as Hood Panda on YouTube, continues his weird flex of identities: blader, yogi, skate instructor, and social media sensation. Embracing this flex enables him to seek out the overlooked spots, lacing clean cess-and-grind combos and transfers on ratchet rails and beams. 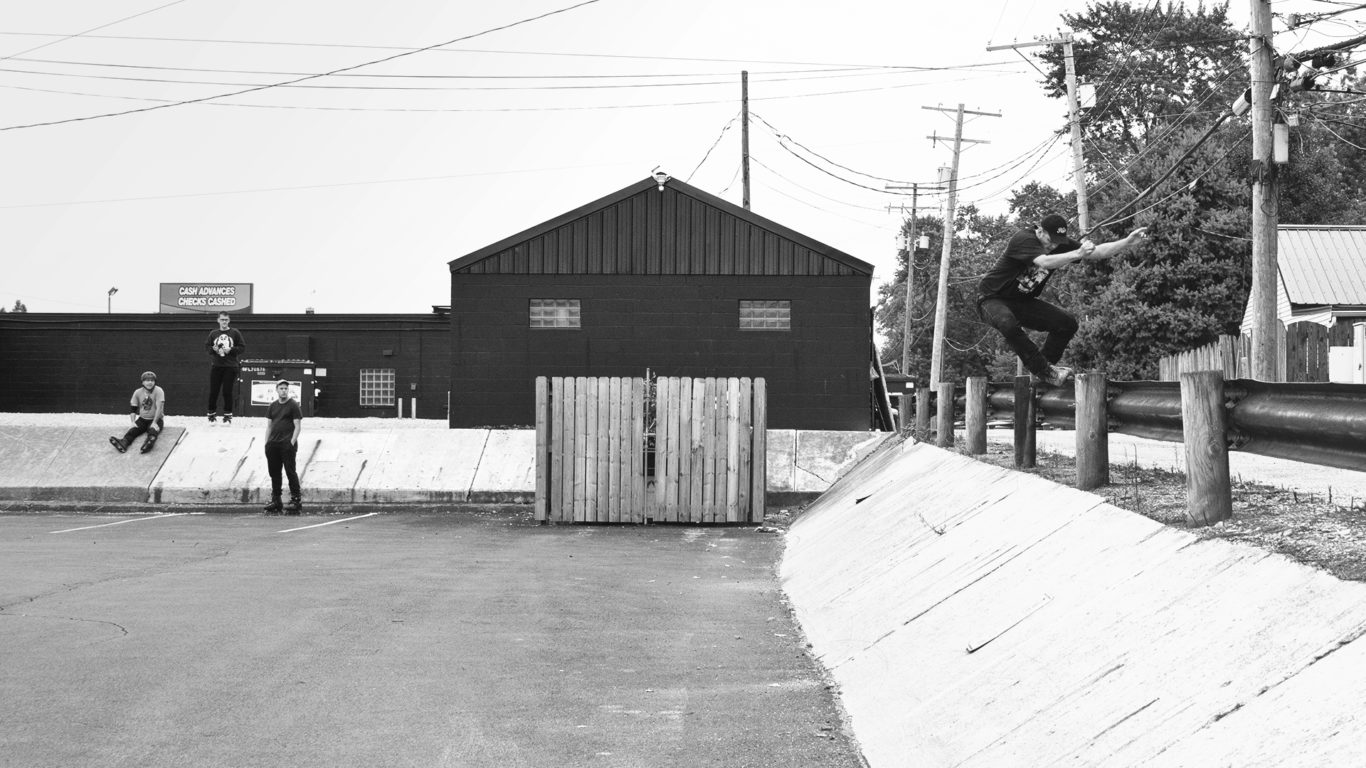 Zach Cummins with a sweaty on a gnarly guardrail. Photograph by Brandon Ballog

The final section belongs to king of the concrete jungle Zach Cummins. While the lion may be a fitting feline to represent his size, the blond beast doesn’t fit his personality, which is quiet and relaxed.

The lion’s swagger, however, does capture his skating style: he calmly approaches obstacles and then abruptly laces tech tricks and drops hammers with equal equanimity.

Not many big dudes can throw themselves into wall rides as smoothly as he does. Not many bladers in general can roll obstacles not meant to be rolled (looking at you mini-mountain of concrete chunks). Style eludes a general definition because its look can differ vastly on different bladers; on Zach, style is like water: destructive and powerful yet graceful and flowing. 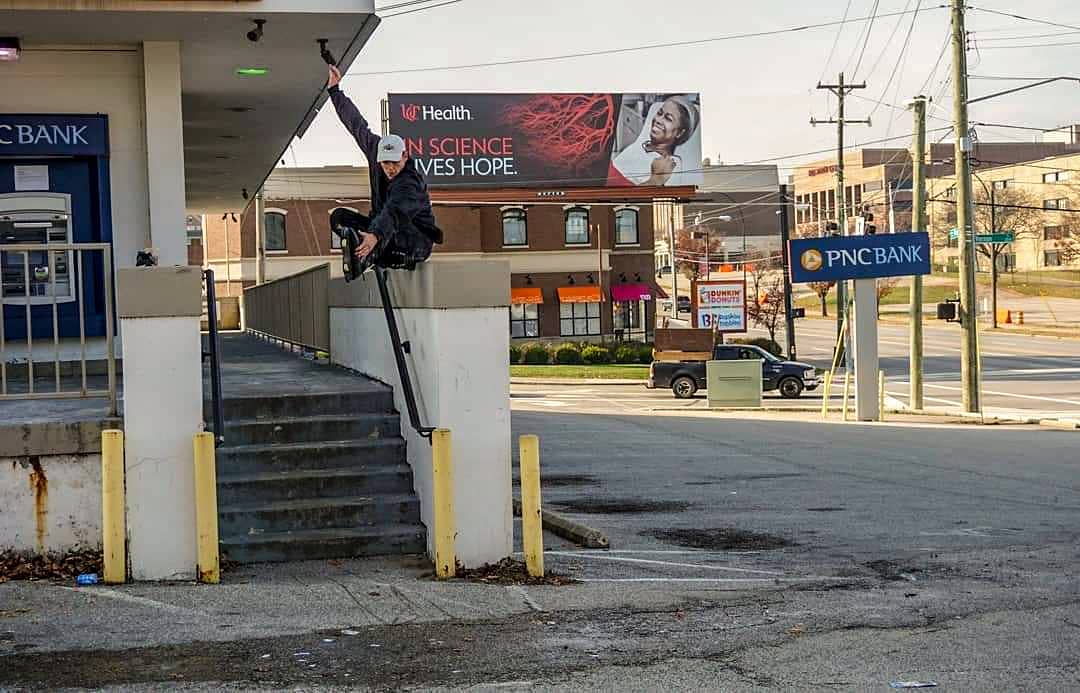 Thanks to Ryan for editing this video, and thanks to Tim for always being down to film; you guys are the creative force behind all of our tricks. And thanks to the rollerbladers and rollerskaters who came to the premiere! We appreciate the support.

That ends this video review, but I brought my soapbox, so strap on your soap shoes.

Next time you see a trick (or dad joke) too weird to live but too rare to die, think about the last time you did a trick you didn’t have a name for. Some may remember that feeling from skating in the early ‘90s. But, whether you skated way back then or not, that feeling needs to stay alive because it revitalizes each sesh and each scene and our sport itself.

Blading, if it’s going to survive, can’t solely be based on nostalgia. That said, there seems to be two types of nostalgia: one regressive, the other progressive.

The kind that will hold rollerblading back commits the golden-age fallacy, according to which the past is flawless and the present is irredeemably flawed. The nostalgia that will keep rollerblading progressing, on the other hand, honors the past but is forward-looking, remembering what it felt like to step onto terra incognita while continuing to seek out new unknowns.

The future of rollerblading is a synthesis of styles, a return to our humble beginnings where the LINE between recreational and aggressive blurred, and nameless tricks were the name of the game.