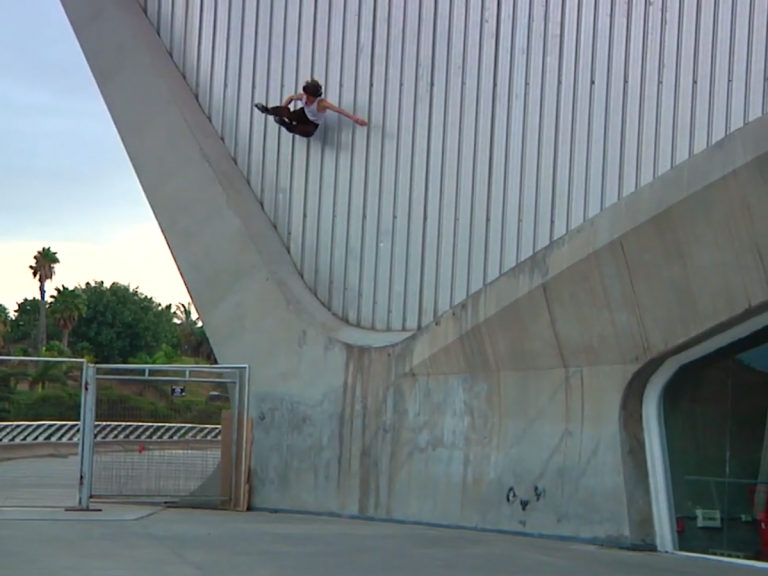 When the incredible Haitian Magazine and Balas Perdidas crews teamed up for their VOD titled Echeyde, we knew we were in for something special and groundbreaking and that is exactly what we were given. With an all-star cast such as Leon Humphries, Billy O’Neill, Dom Bruce, Brian Bina, Miguel Ramos, Marc Moreno, Chris Dafick, John Vossoughi, Christian Berg, Adria Saa, Brandon Calleja, Teles Angel and Kare Lindberg, how can you go wrong?!

Echeyde, in the ancient Guanche language, refers to the volcano that towers the spanish island of Tenerife, which is where our motley crew of blading badasses started their quest to document all of the skate treasures that were hidden there. The colorful surroundings and picturesque skate spots that, for the most part, have previously never been seen in a blade video before, create the perfect atmosphere for an epic production such as Echeyde.

The video is an absolute classic blade flick which accurately documents the common bond among skaters. Echeyde was beautifully edited by none other than Haitian Mag head honcho, Brian Bina, who does an amazing job in expressing the close knit comradery that is evident between the group of friends. Having filming assistance from the always capable Marc Moreno, Teles Angel, Chris Dafick & Leon Humphries, doesn’t hurt as well. Echeyde also features an amazing musical score contributed by Vasco Moyal, Brian Bina, John Vossoughi, Clement Barbaza, Xathan Stewart, Jona Seufferheld and Seba Seufferheld, which really gives the video a unique and fitting soundtrack to accompany the breathtaking scenery of Tenerife, which is a visual orgasm for skaters and tourists alike.

So if you missed out on purchasing Echeyde when it was initially released, than enjoy one of the best full length videos in a very, very long time for absolutely free! Be on the lookout for more incredible offerings from the Haitian Magazine and Balas Perdidas crews soon.

BE SURE TO FOLLOW HAITIAN MAGAZINE @HAITIAN_MAGAZINE & BALAS PERDIDAS @LOSBALASPERDIDAS