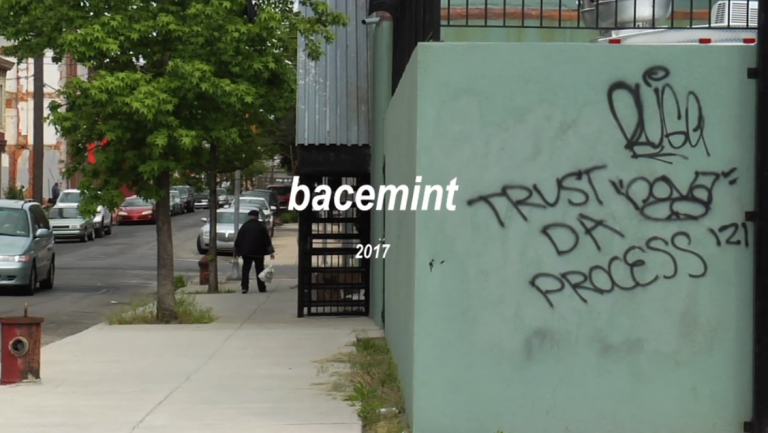 (DON’T?) TRUST THE PROCESS: A REVIEW

The brothers Kelso just dropped their second VOD for their clothing brand BACEMINT, aptly named ‘Trust the Process’.
It starts with a song that sounded familiar, soon I regonized this from an FR commercial in VG3. The video starts with a part filled with mostly Patrick Ridder‘s skating from when he visited Philly last spring. The video that came out before TTP was edited like a session video and personally it bothered me because it looks like they didn’t put any effort into the editing of the video.

This one looks like they only did a bit more and made profiles.

The filming is really close up with the tricks, it works for this kind of skating and you can see that the brothers Kelso learned from previous videos because they know how to film certain tricks well.
Sometimes the shots where a little bit rushed and shaky and that bothered me as a fellow filmer (trust me I learn everyday from my own filming and try to learn from every edit I watch). Something that I thought was weird was that like 80 percent of Ridder’s clips were filmed in Germany. I know it should not matter but I personally enjoyed the Philly only vibe a lot. It might have something to do with my emotions for the city outside of rollerblading.

The music in the first part was good but I lost interest half way.

The type of skating and the filming works for the smaller edits they made (Fishguys or any park edits). However, I realise it’s a matter of personal taste, as I beleive there’s more than enough people that appreciate this type of filming, or say they do because they don’t have a personal opinion. I watched the video two times, the second time during the writing of this review, and that is once more than Valophilly.

The images look crispy and clean, some of the skating is sick, mainly Colin’s stuff but it does not juice me to go skating. What it does is it juices me to get night clips, that’s for sure. Also, I have to admit one thing the Kelsos did right is making me feel like it’s the 1990s all over again with their camo pants and the Majestic 12s / V13s, makes me almost wanna skate them again, but then I remember how horrible they felt on my feet and because I rock a size 46 (US 11,5) they look like boats.

If you really enjoyed KCMO, Valophilly and their other work, buy this.
If you hated the aforementioned, you will hate this one, too.

Disclaimer: Reviews are a matter of personal preference, so let’s not get carried away or butt-hurt. Thanks, editorial board.