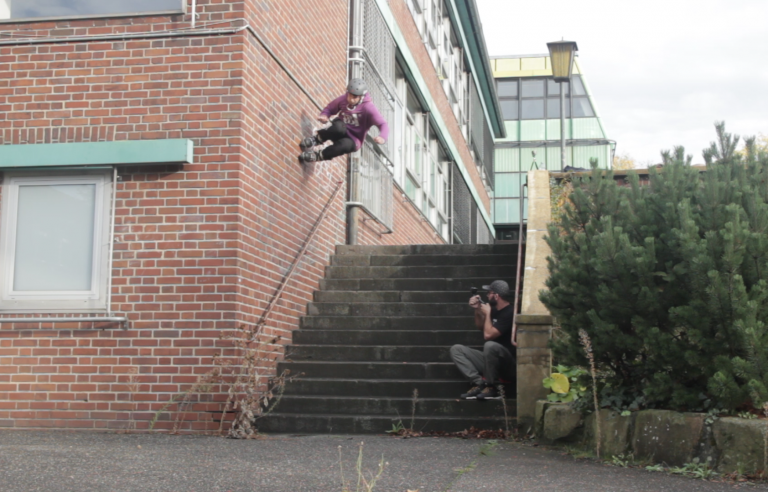 Croatian born David Prajz sent us his newest profile which is a whopping seven minute long video chalk full of tech tricks and a classic style that is reminiscent of blading’s heavily influenced hip hop era. David titled the profile “The Uncomfort Zone”, which he gave a thorough explanation for.

If you’re only doing the tricks that you feel comfortable with, you wont learn any new tricks. Every time I go film something, I want to do something I never did before and I try to push myself.

David shared with us some serious adversities that he was able to overcome in filming his newest profile, which included losing his spleen and suffering a very serious head injury. Here is what David had to say:

The case with my spleen, I was totally out of energy. I had to wake up 5 days a week at 4am to go to work and I couldn’t really get used to it, then one day, I wasn’t really in a good mood, had some stress, but I just wanted to go to skate and I fell over jumping straight over a spine and it was really bad…then as I arrived home, I layed onto my bed and started throwing up. I was thinking at the time, that I broke my bone, my rib, because usually we break bones when something like that happens, not the organ lol… I told my roommate to call the ambulance and as they arrived, my tummy was totally big, I lost 1liter of blood and the doctor said, after it was scanned, that it has to be removed.

On another previous occasion years before, I went to Spain and Gibraltar and I won the park competition in Pècs, Hungary, but fell on my head after the competition and the main artery in my head burst and I had four inside bleedings and had to remove the big part of my skull and I was in a coma for four days. One and a half year after it, my own bone was implanted back, I started skating again, was even better then before, but then my body rejected it after one year, so I had to remove that part of the skull again, my own bone and I got the plastic plate one year after it. But giving up from skating was never an option…you can do anything you set your mind to! But I never skate without a helmet anymore and I strongly recommend it to everyone to wear it. Once you get used to wearing it, you can just feel more and more comfortable with your skating and push your limits even more.

That is quite an inspiring story and we are glad to see David has recovered and is still able to skate at such a high level. David filmed “The Uncomfort Zone” this year in Germany, the Netherlands, the Czech Republic and his home country of Croatia and was filmed by Andreas Wilms, Sven Bursic, Sascha Quack, Martin Krutina, Daniel Meier, Marcel Elz, Patrick Smiljanic and Gabrijel Prajz.