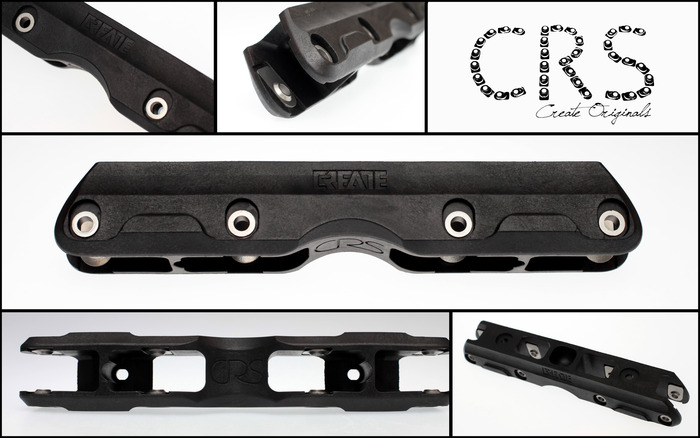 The CRS Frames are Real

The Create Originals Custom Ride System Kickstarter campaign was funded with $37,211 from 370 backers on April 26, 2013. It’s been the largest crowd-funding in rollerblading hard goods manufacturing. The initial estimated delivery was October 2013, and now in February 2015 the frames have still not been delivered. The CRS Frames are Real
by Brian Krans

Faith in the project, according to Kickstarter comments and message board conversations, has dwindled, due in part by the lack of communication from CO. The latest supplied by CO came in November.

“People said we weren’t putting up enough updates and they’re right. But putting out an update that nothing has changed really isn’t an update,” Brian Lewis, co-owner of CO, recently told Be-Mag. “When something changed, we’d put out an update. Sometimes it was months apart.”

But now, 22 months after the Kickstarter was funded, the frames are manufactured and are currently en route to the U.S.

“As we sit right now, as far as I know, things are 100-percent paid, we’ve received a commercial invoice, we haven’t received tracking, but we have a track record of getting products before we get tracking,” Lewis said Friday. “It could show up in the next 24 hours or it could show up next week. Right now, it is 100-percent out of our hands and waiting on them.”

Since the interview, Lewis and Hakeem Jimoh learned the 1,800-pound shipment were awaiting clearance from customs at the Logan Airport in Boston. The pair had been waiting for tracking information, but as their track record showed, the goods showed up before the numbers.

Michael Bayr, founder and publisher for Be-Mag and CO’s European distributor, confirmed the frames have arrived there.

In short, yes, the CRS frames are real and finished.

No, the CO Kickstarter was not a scam, sham, or conspiracy.

Yes, you still have to pay for shipping.

The Rumor Mill Begins Churning
Kickstarter rules are simple: you back a project in hopes you get something in return. Those who collect the money are not legally obligated to deliver the rewards, which is enough alone to stir the rumor mills when numerous deadlines passed on the CRS project.
CO has been heavily criticized for their lack of transparency in the last year of the project. Many times backers were told frames were in production while new estimated delivery dates flew by.

Three months ago, Jacob Barnes said on the Mushroom Blading Podcast he was initially excited about using crowd-funding to develop a new future rollerblading industry, but after long enough, he had his own suspicions.

“The way this situation was handled, it seems unlikely people are going to get their frames,” he said. “It doesn’t seem likely the company has a future and I would say they have gone so far that no other rollerblading company will ever be able to use Kickstarter to fund any kind of similar project. And that’s the really scary part.”

Barnes went on to claim that the project’s real goal was to dissuade any other company from attempting to crowd-source another project to keep manufacturers like Razors at the top.

“Obviously nothing he said holds any water. Talk about someone who owes us an apology,” Lewis said. “We’re not like Darth Vader and the Sith Lord. We’re trying to go out on our own.” But instead of responding to those claims as they came up, Lewis and Jimoh decided to remain silent to keep working, whether on the CRS product or at the their jobs to keep money flowing into the over-budget product.

“Professionalism went out the window. It was more important that Hakeem go out and do a moving job than him getting into an argument with someone on the internet,” Lewis said. “All this speaks to is how bad people want the products to come out. And no one wants that more than Hakeem or I.”

Lewis doesn’t fault people for being upset about the lack of updates and would have provided more updates, but too often there wasn’t enough information to share or a new delivery date to give.

The $37,211 from Kickstarter pledges is less than half of the total project, the rest coming from money Hakeem or Brian made moving furniture or other jobs.

The China Connection
The longest delays with CRS production came with dealing with companies in China, the global hub of manufacturing.

The company that produced the initial prototype frames dropped the CRS project because of the difficulty to manufacture the stainless steal spacers because few companies would take on custom-tooled projects with only 815-product output.

“Most factories won’t even talk to us because we’re not big enough,” Lewis said.

CO ordered stainless steel washers, but one factory sent over bronze ones that were 0.5mm smaller, and the same manufacturer provided samples with UFS holes that were too big, and flat out didn’t receive parts. This, Lewis said, was only one of several factory-related errors in sample frames, which meant time and money being lost in the process.

“Of course every time something like this comes up, they don’t say, ‘Hey, we messed up and then we’ll fix it.’ We either pay to have it fixed or we’re dead in the water,” Lewis said. “You would think they were going to redo this on their money, but nope. You have to pay for their mistakes. That’s China.”

The latest last-minute surprise was after paying the four-figure shipping bill when the company came back demanding another $350. If they didn’t pay, the frames wouldn’t move, so they paid.

“It’s been a nightmare. If you’re the little guy, it’s just unreal,” Lewis said. “They’re really unresponsive to us. We’d be waiting for the factory to make a change, which could take a couple of months. We aren’t priority for them.” What’s Next for Backers
Those who donated to the Kickstarter campaign should pay attention to their inboxes. CO will soon be contacting backers with a survey about shipping. If your address has changed since 2013, you should update it on your Kickstarter profile.

As the Kickstarter stated, the money pledged doesn’t include shipping costs, which is all determined by a blader’s location and chosen delivery method. The quicker you respond and quicker you choose your shipping method and pay, the quicker you get your frame.

For non-Kickstarter backers who want CRS frames, limited editions will be available through shops and distributors that backed the project: include Adapt, Aggressive Mall, Be-Mag, Thuro Skateshop, Grindhouse, Inline Warehouse, Oak City, Roller Warehouse, Rullerclub, Shop-Task, and This Is Soul.

“Literally, we now have no buying power,” Lewis said. “We don’t even have money to produce graphic frames and the CRS frames coming out are all spoken for.”

For CO, the project is anything but finished. After more than three years of work, their latest frame is coming out and they “could be the bee’s knees or the bee’s asshole,” Lewis said, but they’ve kept quality as a top priority during the manufacturing process.