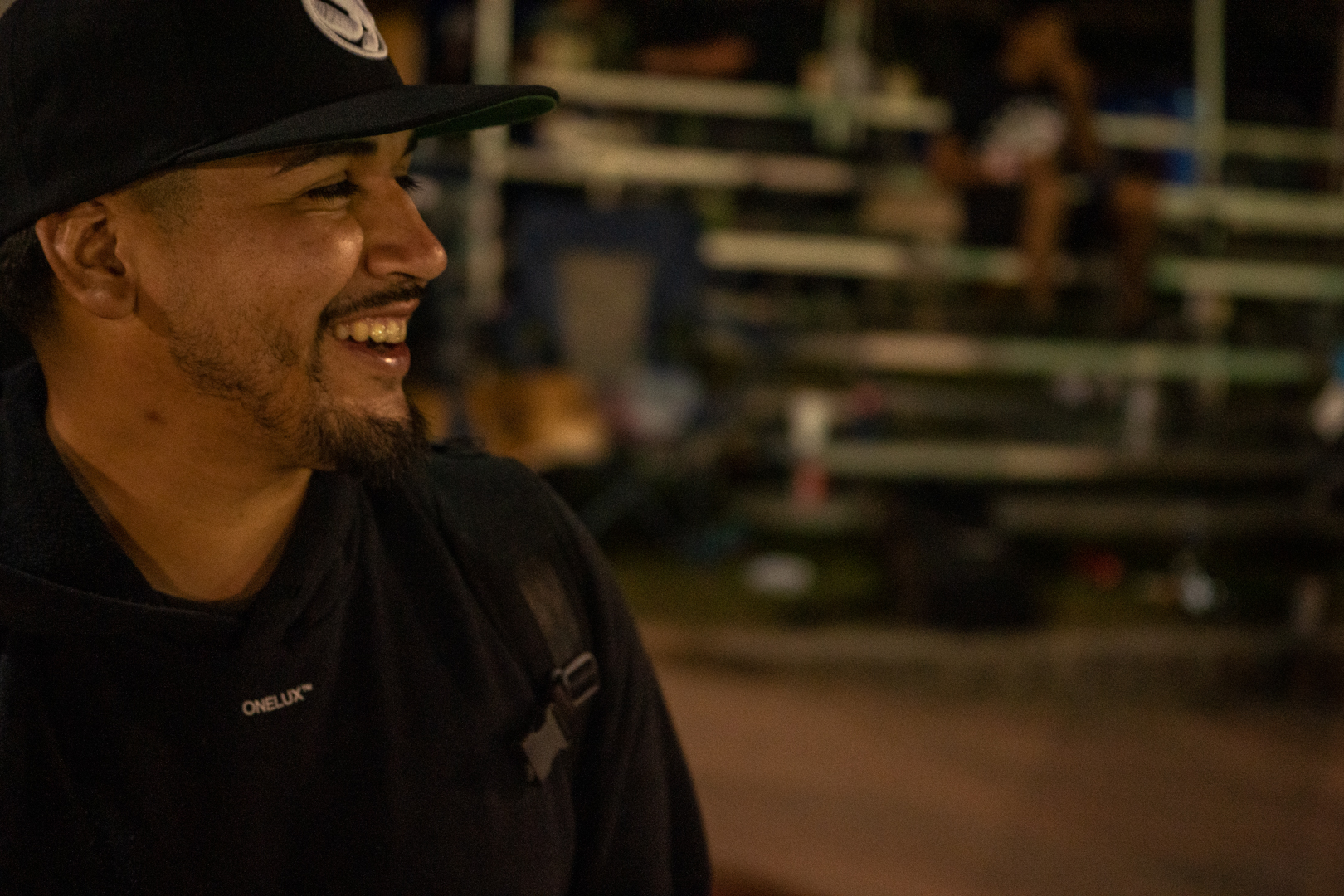 SHINING A LIGHT ON POW-WOW WITH MIKE JIMENEZ

After 4 long years on hiatus, the Panhandle Pow-Wow made it’s much anticipated return in 2020, but it wasn’t without it’s share of complications. The pandemic known as COVID-19 has spread throughout the greater parts of the world and it’s impact has altered everyone’s day to day life, in one way, shape or form. Businesses both large and small are forced to work limited hours or close up shop completely, leaving millions unemployed with limited options for new employment. Hospitals around the world are frantically working to accommodate the overwhelming demand and essential medical supplies are in short supply. Thousands of people have been infected with the virus and statistics are showing the continued growth to be beyond alarming and the far reaching impacts of this pandemic have yet to be fully seen.

The Pow-Wow weekend coincided with the start of almost every major sporting event being canceled or placed on hold indefinitely, so there were many conversations among the organizers regarding if the event should be postponed or continue to take place but under the specific occupancy limitations that were handed down to Kona Skatepark via the state of Florida and the Center for Disease Control.

The Pow-Wow event is unique in that it’s festival atmosphere brings in skaters from all parts of the world & Kona Skatepark would essentially be their dwelling place for that particular weekend with it’s on-sight camping availability. The risk of leaving that massive amount of people without places to stay on the streets of Jacksonville in the middle of a pandemic surely weighed heavily on the shoulders of the organizers. But with continuing the event, that also comes with it the very real possibility of spreading the virus among the participants of the event. The staff of Kona Skatepark and the organizers came to the decision to continue the event but keep the occupancy under the mandated 250 people, which would only allow pre-registered contestants, media members and organizers entry. Thus leaving out the general public and some spectators from entering. The staff alerted everyone entering to practice social distancing, and to utilize the many cleaning sites available to maintain proper sanitation.

As a culture with an ingrained mindset that consistently puts personal health on the back burner for the reward of pushing physical capabilities, this event was also a gamble, but one with much more severe ramifications that everyone in attendance was made fully aware of. And against one’s better judgement, they decided to throw caution to the wind and the Pow-Wow train moved on. Under the direction from organizers there would be a strict social media blackout as to limit outside exposure and attention to the event in hopes to stay within the strict occupancy limitations, also ensuring that the working relationship between the organizers and the Kona Skatepark staff stays intact for future events.

A few weeks have passed since the Pow-Wow concluded and we have honored the social media blackout that was in place and we now take the opportunity to speak with the individuals that experienced the event and get a first hand account of what transpired that magical weekend in the concrete jungle that is Kona Skatepark. Our first up to bat is NorCal’s own photographer extraordinaire, Mr. Mike Jimenez! Mike came back home with some incredible shots and memories of the event and sat down with us for a quick chat to discuss what made the 10th annual Pow-Wow such a memorable blading event, one that will be forever etched in the history books of blading lore.

Considering all of the multiple events that Pow-Wow holds, what do you look most forward to during the Pow-Wow weekend?

I think the event I looked forward to the most was the pool party. And the reason for that is the high caliber of skaters that attended this year’s event. And boy they did not disappoint! Blake Kelly won the event with probably the craziest one footed grinds I have seen anybody do in a pool! And the best part is I was able to catch them on my camera! 270 pudslide and back fast slide are just some of the tricks he laced. Chad Hornish along with Joe Atkinson and Carson McUnity (McNicholas) also killed it!

The Pow-Wow and Kona staff added many incredible new features to the park for the event. What was your favorite obstacle to skate or most enjoyable to watch?

Big thanks to everyone involved in the creation of the new obstacles! I would have to say the mini was my favorite thing to skate. Being from the Bay Area we don’t have many wood ramps to skate especially wood mini ramps. So I spent most of my time skating that. I would have to say the street course they built was also really fun and even more fun to watch the pros kill it in the finals. The Blader Union banks to wallride box was a great addition! Crazy tricks like Montre’s 540 to flat was insane among many others like Joe’s full cab alley oop top pornstar.

The state of Florida is well known for producing infamous stories. What is the wildest thing you experienced while visiting Jacksonville?

Funny you should mention crazy stories about Florida my buddy Josh Tipton and I went to Walmart just for that reason the first day we arrived and unfortunately we didn’t see anything too crazy. The biggest shocker was the no toilet paper and hand sanitizer because of the Corona virus.

Since you have a first person account of being at the event during the initial days of the Corona virus escalating, how did that affect the overall atmosphere of the event in comparison to previous Pow-Wows or events that you have been to?

Honestly the Kona and PowWow staff did a great job with communicating with the guests about the whole ordeal we actually did a count to make sure we were under the 250 person limit for gatherings that the state of Florida had implemented. Then we took a vote and agreed on a social media black out for the event if it were to go any further. The staff had food trucks there for us along with clean porta-potties and showers to use. They also encouraged everyone to keep washing their hands and to keep good hygiene. After all that the atmosphere was great and morale was high since the event would continue. I would say this event has been the most welcoming one I’ve been to and my favorite so far! The people, the contest and atmosphere was great and I can’t wait to come back!

⦁ From each of the events (amateur, female and pro) who were your favorite skaters to watch during this PowWow event?

As far as amateurs go I would say Carson McUnity (McNicholas) killed it in all the events he had some dope unity tricks that were very tech and a very smooth style. For the bladies I would have to say Chynna (Weierstall) and Carla (Pasquinelli) killed it this weekend. Chynna definitely had the most tech switch up on the down box out of everyone! It was an alley oop mizou to inspin sweaty. And for pro skaters it was probably Joe (Atkinson), I have never seen him skate in person before and it did not disappoint the way he flows the park and pool is just so amazing and stylish and the tricks are so tech and well put together it’s a joy to watch!

Our good friend Fritz Peitzner was injured with a severe head injury while skating at the Pow-Wow event and was just recently released from the hospital. In your opinion do you think making the athletes wear a helmet to compete should be a requirement going forward or leave the decision in the hands of the athletes?

I’m a bit torn with this question because that was the worst fall I have ever seen in person and if he was wearing a helmet that would have helped a lot. But at the same time, we are all adults and know the risks. So at the end of the day I would say leave it up to the competitor.

Did you have a chance to skate the terrifying Kona skatepark vert ramp? Yes, no or hell no?

Unfortunately I did not skate the vert, well maybe next year!

I am sure there were so many noteworthy moments from the event but what was your favorite moment from this year’s Pow-Wow?

I would have to say in the finals when Montre (Livingston) kept getting the crowd hyped after he would lace a trick he would do a flat ground misty and it would get everyone hyped and you could feel everyone’s vibe.

What makes the PowWow different than other blading events that you have been to?

I would say the atmosphere makes it different. It’s so inviting and the fact that you get to camp and skate with everyone for multiple days creates a lasting bond and makes you want to come back for more. I highly recommend attending a Pow-Wow if you haven’t, the camaraderie and sense of community you feel is unreal and gives you hope for our small community.