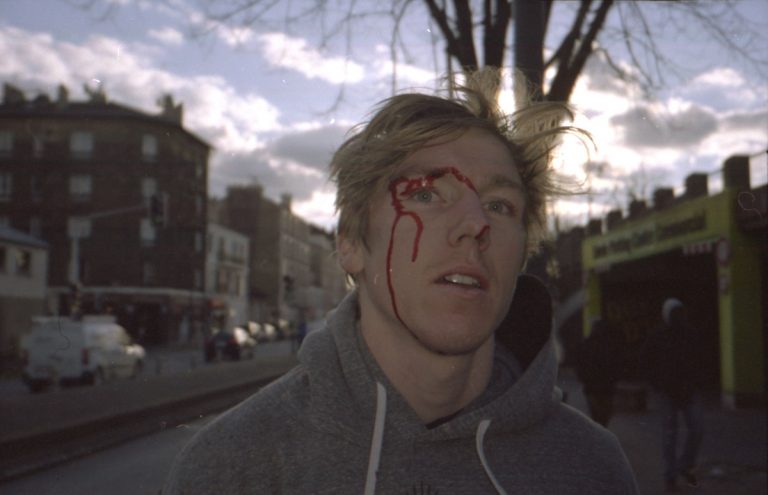 Checking in with Sam Crofts

Sam Crofts is efficient – when he has to be. He’s been working real hard during the past few years, getting his name out in the blading world, touring with USD and filming with his teammates. He plans on concentrating on rollerblading this year, which is good for us.

And he’s proof that hard work in rollerblading pays. He’s just been added to the Gawds wheels european team roster and went to Paris to film for an introduction edit with the hard working straight edge hard core punker Cavin Brinkman. Be-Mag spoke to him just after he got back home from a night’s session at the Playstation skatepark in London with Blake Bird and Michael Pupava. So, you filmed with Cavin for almost a week in Paris. How did that turn out?
The edit was shot in Paris, over 6 days. Cavin’s straight edge so filming with him was rather clinical, but efficent. He makes good use of time that’s for sure.

How is skating in Paris compared to London? Congrats on getting on the same roster with Franky and Dave Lang.
It’s kinda similar sort of big city vibe, lotta haters and people that assume you’re some vandal so they give no fucks about what you’re doing. The French police didn’t seem to care at all, I guess they got bigger fish to fry than rollerbladers right now with the current state of things.

Could you sense a sentiment of fear in Paris because of the terrorist attack last year and with what happened in Brussels? Do you follow the news and interest yourself with politics?
There is definitely a different atmosphere in Paris after last year’s attacks, I wouldn’t really say a sense of fear but more a show of solidarity. The French are a resilient nation and aren’t going to allow terror to stop them going about their daily lives. The security presence is like nothing I’d seen before though, the army and police constantly patrolling the streets and the metros brandishing their assault riffles and analysing everyone. That does leave you bit on edge, feeling like it’s gonna kick off any minute. But we were left free to skate with no trouble from the police at all. Other than when we filmed in the metro on the big red ledge at Auber. I fishy’d it, almost true porn’d it and then the police showed up and we got busted. Kind of expected when you’re skating indoors though, but these guys got militant fast. If it was London or Barca I would have just skated off but I got warned about the heavy-handed French police and didn’t. Lucky we did’t get a ticket, Cavin and  don’t speak French, they didn’t speak any English, we had no passports or ID on us, we went in circles not understanding each other for a couple of minutes, they got frustrated, made me take my skates off and just let us go.

Airport security was crazy tight also, when I left Paris to go back to Barca everyones hand luggage got thoroughly checked. I felt bad for the bloke that rummaged through my bag, I doubt he enjoyed putting his hands in my skates and running his fingers under the innersoles of my liners, my clothes weren’t too fresh by this point of the trip either haha. They took my allen keys, standard, and oddly my 75ml of iodine to.
I do follow the news and attempt to keep up with current affairs, I check BBC, Al Jazeera and The Guardian most days. I also have their apps and get headlines on my phone. I fell out of the loop a bit whilst in Barca though, it’s easy to just live in a little bubble out there.

Yes, I can imagine that with the fuzz. Were there any special or new tricks you tried working on for the edit? Cavin sure knows his hardcore and straight edge bands. Did you pick the song for the edit and what is it?
Nothing too special in particular, we had limited time so I stuck to what I knew to get results.
I chose the song. I have good relations with the guys at High Focus records so I chose one of their tracks.

And are you happy with how it turned out?
Yes in hindsight I’m happy, considering we only had 6 days in total. I’m pleased with how it turned out. The original plan was for something much bigger, we planned to tour for three weeks across France, Holland and Germany but got totally rained off.
We filmed for four days in Paris, left for Holland and got rained on, checked the forecast for the coming week and it was more rain in Germany. We cut our losses and headed back to Paris and got two more dry days.

I heard from a friend that the weather in London was nice during the past few weeks, ironically.
Haha, that’ll be the law of sod’s working there. Wow. I started skating in 1996 and I remember being so excited for skates to become UFS, it’s kind of irritating to see USD drop the system to go back to a single piece skate. I’d buy a UFS frame that looks the same as an Aeon frame though.
It’s easy to become frustrated with what appears to be a step backwards. But the responsiveness, frame split and weight reductions is unparalleled. So one step back, two steps forwards, I guess.

How is USD treating you? Are you happy with the relationship with the team management? Do they cover your travel expenses?
USD take great care of me. They put the best skates on my feet, clothes on my back, pay me for my content and send me around the world. What more could I ask for?

You seem content. So, what are your plans for this spring and summer? Do you plan on travelling to skate? Do you study or have a steady job other than skating?
I’ve finished my studies now, I graduated from university back in 2013. I did have a steady job teaching English in Barcelona last year, but this year I’m just skating. In May I’ll hit the road again, I’ve been invited to some street comps in Holland and France and I’d also like to wrap up this other project I’m working on by the end of that month. Besides that I’ll like to go Roskilde this summer and possibly America, all undecided so we’ll see.

What’s this new project you’re working on, and who with?
I’m back in England for the next 5 weeks so gonna be working with my old homie Tom Sharman. I’m always happy shooting with tom, we’re old friends and things work very naturally. Plus all his works great, forever creative. He made both my USD London City edits and a bunch of other stuff for me.  We got a few clips whilst I was in London over Christmas and I’m sitting on a bunch of footage I got from MVG, Lomax, Cavin and I also just got sent some really nice stuff this morning from Remy Cadier. Not sure how Tom’s purist attitudes will feel about this mish mash of different cameras though hahah but we’ll see, could end up with two projects on the go.

I’d love to see you come over to the Pannonian Challenge in Osijek this year. Joe Atkinson won last year. He pretty much won everything there was to win though. You are deffinitely a no bullshit skater, do you like to compete?
Yep Joe crushed it last year, absolute champion!
I do and I don’t, I like it when it’s not taken too seriously, no protein shakes and early nights for me. Basically if you didn’t go out with all the homies the night before, you cheated (laughs)!

So, clinical efficiency isn’t really your cup of tea?
It can be when there’s a job to be done. How do you feel about the European scene as compared to the US now? It seems the most important new skaters (you included) come out of Europe now, people such as Joe and Eugen Enin, that seem as they will shape skating in the next decade?
It’s hard for me to make an impartial answer on this one, the skaters you’ve mentioned are good friends of mine and are sculpting the future of blading, but the US has alway been a big player on the scene, setting standards for generations and will continue to do so providing inpiration for me and the rest of Europe.

Have you beem following the new film releases? SOTA really raised the bar again and Seis de Bastos is really cool. Havent seen the new London vid by Sharman and Humphries yet though.
I’ve been reasonably up to date, SOTA was phenomenal, the best skaters captured in the best way, Jonas absolutely killed it with that one. I haven’t actually seen Seis de Bastos, but the I saw Many Revolutions and of course loved it, all the London homies smashing up the city as always. Bowers section in particular, possibly one of his best ever.

I’ll have to get it then!
Get it for Bowers section alone, the current king of London.

Any shout outs?
Yes, I’d like to give a shout out to all my homies across the world, THC, Capital Rollas, my russian crew in Moscow, the spanish homies, the dutchies and everyone thats ever shared a smoke or let me crash a sofa. My sponsors USD, Gawds, Locoskates and Kaltik for making all this possible!