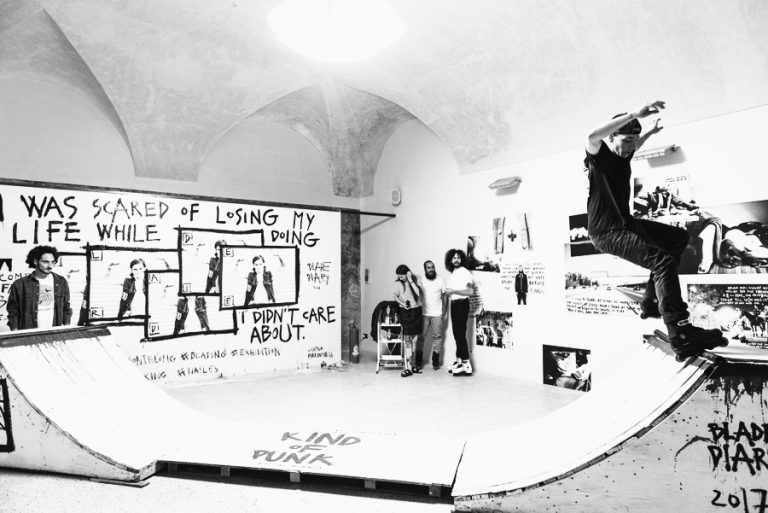 CHECKING IN WITH PIETRO FIRRINCIELI

Pietro Firrincieli has been making waves in the Italian photographic scene lately, with his Blade Diary exhibition at the Magazzini Fotografici in Naples being held from September 29th until November 6th. The exhibition is just one of the stages of the project that has been going on for a couple of years now, achieving new success and finding new forms. During the opening, Pietro did a presentation of the Tunnel Park fight against Camorra, the Naples Mafia and the City Hall (which seem to be partnering, according to Pietro).Pietro always tries to do as much as he can for blading on every scale possible so he decided to use the exhibition in Naples to do something for the local crew and the city. We spoke to Pietro about his views on the state of rollerblading photography, the media and his projects. So, what has been going on since the release of the Blade Diary? You have been exhibiting, your work was featured in La Gazzeta dello Sport?
The BLADE DIARY never stopped since the first picture in 2011. Even though after the last tour in 2013 the work was less visible (for many reasons) if you check the blog and the dates of the posts, you can see there was always something going on. Doing the editing for the book, writing it, designing the object, dealing with the incredible numbers of problems that happened during the print of the first edition (it got printed 4 times before the good batch) hand made them, getting published on L’ Espresso, doing the first exhibition at Gazebook as emerging photographer, presenting the book at MatteLab together with the first personal exhibition, a collective one at Minimum, Huck magazine, La Gazzetta Dello Sport, and this last show at Magazzini Fotografici in Naples, which is the first ever one month long exhibition about blading in a real gallery, took other four years of hard work. At the moment I’m hand making the second edition of the book that will be available before Xmas at Leporello bookshop in Rome, Micamera bookshop in Milan, Tipi bookshop in Bruxelles and Hedonskate in Poland, for the peoples who didn’t made to do the donation time trough my website.
By the middle of the month I’ll be in Palermo at Minimum to design and print the next exhibitions for the end of this year.
Beside the BLADE DIARY, my new video project #RESEARCHONMOVEMENTSANDTIME with his first installment of SAETTANTI BOUMMM! got awarded at one of the main video dance contest in Europe called La Danza In 1 Minuto, with the production prize. This means a budget to produce a short movie that was suppose to have a national premiere in Turin in march 2018 but the production is suspended due to personal reasons. It will take about a year more to see the light.
The project, in short, is about the act of blading as art performance, and comes from almost four years of research on contemporary dance.
I’m very interested in performances lately and that’s the reason why there is a – very punk – ramp in the exhibition in Naples too. There wasn’t time to build a “real” performance and we did just a little session during the vernissage, but is definitely something I’d like to improve if I could find some budget to do so. What do you think is the most important thing rollerblading photography taught you and brought you in the past few years?
That people love blading when IT is presented in a way they can relate to.

Looking back, who was your favorite photographer from our old publications, early Be-Mag, Daily Bread, Fourinarow, Crazyroller, Unity?
Dan Busta. With almost nobody doing print magazines anymore, if an issue a year is considered a regular publication, where do you think rollerblading photography is going?
To independent publishing, like every other field of photography. Hermanos by Ivan Narez, Chapter 2 by Dom West, Delfon Dio by Cayenne Project shot by Dominik Wagner are good examples. Of course having a magazine would help working on bigger projects than a tour or a crew pubblication or exhibition.
Like it was for the BLADE DIARY with Blading.info first and Be-Mag then. I’ve got very lucky and I’ll always be thankful to Jojo and the whole crew. I’d love to see that happen again, every time is a win win game for blading as a whole. A magazine should be a gravity center for these kind of forces and work as an art collective, which is pretty much what we already are.
It’s more a matter of organization, because things happen regardless. What do you think we’ve lost, when creating an emotional bond with rollerblading, with the loss of print magazines? It was always special to get a new issue of Be-Mag or Daily Bread in the mail, to me it was a fucking festivity.
Without magazines we’d lose it all. Magazines make culture, set opinion and trends, build role models and give advertisers a place to put money. You guys should all put your shit together. We need that.
Oh and #fuckrollernews stop clicking on that site would help a lot. It’s all explained on the BLADE DIARY book that is on line for free.

What’s next on your list? What do you want to do with your rollerblading photography?
At the moment I’m focused on exhibitions, the short movie re-organization, the research/rehearsals on performances and I’m getting more involved with Flabby Muscles. In italy we are also working on the CIB, the Italian Blading Championship that will start officially in 2018. With photography I’ll work on new zines at some point, and if there would be a real blading magazine, I’d love to shoot interviews and tours.

He’s already sold some of the prints during the exhibition and some are still available, if you want to own a piece of art. To know what’s still available, the measures, the prices and the delivery organization contact me or Magazzini Fotografici: info@pietrofirrincieli.com or eventi@magazzinifotografici.it