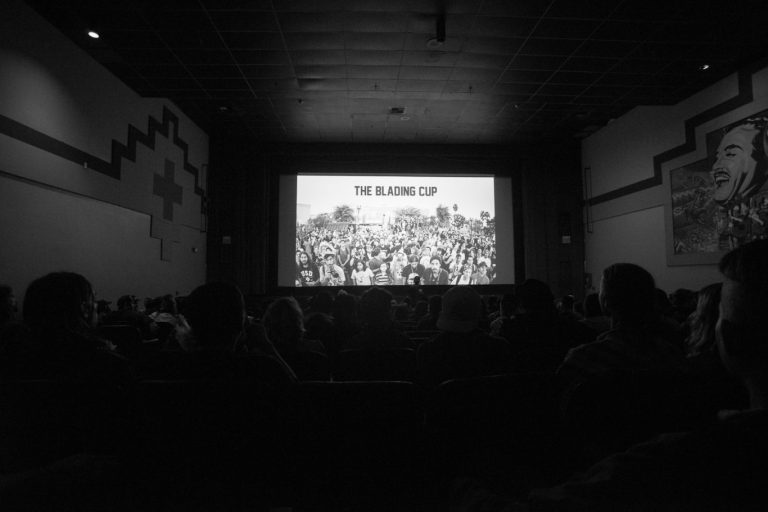 It’s a lot of fun throwing a skate contest in downtown Santa Ana.

It isn’t just exposing our sport to new spectators, watching some of the best in the world shred a course that’s up and down in 48 hours, or the premiering new videos.

This year, without a doubt, was the ability to view it from the balcony of a bar. Well, other people could.

I, as usual, had ground floor access donning an orange shirt, politely telling well-meaning spectators—many of them retired skaters enjoying some beers with old friends—to stay the fuck off the course.

But that’s not the reason I left with a black eye.

Before we continue, it should be noted this report is in no way conclusive or exhaustive and will inevitably exclude some key people. The entire Blading Cup weekend is organized and staffed by dozens of people, from Jon Julio’s cousin DJing the day of to those who are already scheming on how to make it happen again next year.

These are merely some behind-the-scenes memories from a 34-year-old man who loves building ramps for incredibly talented skaters who skate for nothing but love and the chance to showcase their abilities. If it’s their day, they might make a few bucks in the process, which is great.

The Blading Cup weekend is, no matter how taxing on my wits and bowels, my favorite weekend of the year (except, of course, for my wedding weekend three weeks later this year. Love you, Claire).

The fifth installment of the Blading Cup took place Nov. 7, 2015, in downtown Santa Ana, Calif. But before the Titan of the Toe Roll, Alex Broskow, would take home his second Sayer Danforth-made trophy, the grandfathers of rollerblading needed their time to shine.

Skating in the Veterans Cup

I technically shouldn’t have been allowed to even compete in the first annual Veterans Cup. I only met one of the necessary two of four qualifications: be over the age of 31, be married or divorced, have a kid, or be paying on a mortgage.

I only met the age requirement, but since I had to re-schedule when my now-wife and I could go apply for our wedding license so I could drive down to the Blading Cup. Since I’d be married by the end of the month, Jon let it slide.

The contest was held on a Thursday night at the Lux Armor compound in Long Beach, where the Blading Cup ramps are designed and birthed.

We veterans skated the down boxes and rails, as well as the small quarter with an upper deck. Made with steel coping and properly constructed, those boxes were a dream to skate, especially because the run-up was built onto a flatbed truck.

It was a highlight of my life to somehow make the finals. Yeah, I landed some tricks, but guys like Hoang Phung were trying 360 top souls and Chuck Cauton has the fishbrain of a Jedi. There was a conspiracy, but it was in my favor, so I’m only partly the bad guy here.

Skating with legends like Jon Julio and Randy Spizer was a straight up Dear Diary experience. But skating with buddies like veteran orange shirts like Reyna, Jose, and Los kept my nerves from getting the best of me.

But of course the guy who keeps putting out sections (hint: Julio) had to win that night. That’s one good way to keep contest expenses down.

The Veterans Cup was a great addition to the whole weekend, but unfortunately it made it difficult to walk for the rest of the weekend.

I crashed for another night with Chris Calkins and his girlfriend, Bonzi, in their house in Long Beach. He was excited for the premiere of his new edit, Five Finger Discount, with fellow USD riders and had a bit of giddy excitement about its ending. Putting Murphy’s Law to the Test

Friday and Saturday involved long, difficult periods of waiting on pieces to get themselves to the puzzle. And to truly test the validity of Murphy’s Law, we tried to find out exactly how much could go wrong at one time.

Every person we knew searched high and low for the keys to the Blading Cup rental van. They’d vanished, leaving the van parked in a crucial spot on the course, where the launch to wallride would be.

Ironically, the van was parked there to prevent anyone from parking there. Hours later, we had it towed down the block so we could get to work on Friday night.

The crew was supposed to be on the course by 6:30 a.m. Saturday, but others thought the first hours of Ivan Narez’s 30th birthday needed to be celebrated until the wee morning hours.

I, like a good little orange shirt, made the deadline, but I could have slept in because more logistical problems were destined to delay everything.

Saturday morning, there was a car illegally parked at Lux Armor that prevented them from getting the truck full of ramps out. They had to wait for someone to tow that car as well, which wasn’t until late morning.

Then the NISS ramps were missing major pieces, something we noticed way too late. So we sent Nick Wood off to get them, some two hours of L.A. traffic along the way, to a business wasn’t open. Wouldn’t you know, he made it work. Somehow.

With all the pieces in hand—after scrambling and searching to find the right size socket to half-assemble the spine—it was time to put those beastly, devilish metal ramps together. Every year, they give us new challenges. This year, they became violent.

We were already two hours behind and couldn’t start the pro contest—sorry kids, bladies, and ams—without the back quarters assembled. Skaters couldn’t get enough speed from that end without them.

So frantically, I twisted at nuts and bolts to bring the seams together. Wrench in my right hand, the socket wrench in my non-dominant one, I pulled and pulled. Forsaking speed for safety, I felt a wiggle but pulled one more time.

WHACK! The socket slipped off the bolt head and popped me in the face, right above my left eye. Blood dripped to the ground, but not enough to warrant stitches. I cleaned my face with napkins and finished up the bolt.

All of downtown Santa Ana was a buzz of different events, vendors, and signs welcoming skaters to the local businesses.

Emcees Kennan Scott and Erick Garcia competed for air space as a hip-hop concert raged all day, wedged up next to our street course.

Sean Darst was on fire all day, moving up from the open to finish fifth among the pros.

Alex Wick and CJ Wellsmore spent their time on the finals playing around on the potentially deathly rail atop the wallride, while Broskow kept his technical skill at full bore on the quarters, drop rails, and start box, the same from the Veterans Cup.

I’m not qualified to give you the full run-down of the event. Like I said, I was trying to keep people off the course so the skaters could do their jobs. If you haven’t seen the tricks already, this must be your first day on the internet as a blader.

But, I will say I don’t think Jeremy Spira got the credit he deserved for the tricks he pulled. My conscience is now clear.

The videos premiering that night included the USD video, the Bfree VOD, Hermanos, a project from Ivan and Brandon Smith, and a video from NorCal homies John Vossoughi, Jeremy Raff, Brendan Tidd, Neil Chen, and others who can’t help but stay fakie.

The best part of the weekend was finally not having to wake up early on the following Sunday morning to clean up. All the homies—and props again to the Lux Armor crew for this—pulled to get everything off the street Saturday night, so there was nothing left to do but drink some beer.

At last call, above the single block of downtown Santa Ana still lit up by the portable lights, Jon ordered pitchers of beer for everyone. I was still sore from skating in the Veterans Cup two days prior, sleep deprived, a little hungry, and limping from my poor footwear choice the whole weekend, but it was an evening full of good times.

For one weekend a year, I get to be a person in charge of solving problems, but when those problems are solved, great skating occurs. Oh, what a calling in life!

It’s great working Blading Cup each year because of all the friends I get to see and make in the process, even if it was for a moment when I yanked you out of the way of an oncoming skater.

But you absolutely should want to crowd in to get a firsthand view of the remarkable athleticism, bravery, and skill exemplified by every competitor at the Blading Cup, in every division, from veterans to pros.

Michael “Gumby” Braud, who took third in the open, opened his run in the pro division with a switch sweaty on the wallride rail. When I questioned him later about it, he said he envisioned it how Matty Schrock would do it and just did it.

That, my friends, is always a good question to ask yourself. The next time you encounter a difficult situation, do as Gumby does and ask yourself one question:
“What would Matty Schrock do?”

With that said, I’ll see ya’ll at the Pow-wow.