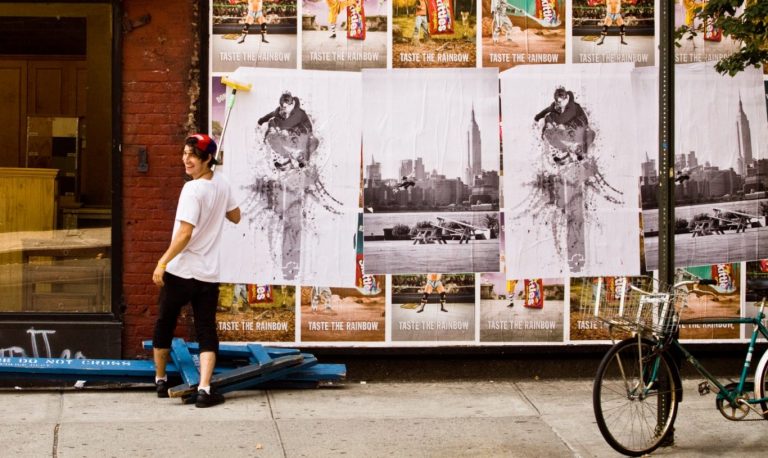 For the third part of The Billy O’Neill Story, we asked some of his friends and people he worked with along the way about their stories, and memories of the times they spent with Fish. When you have people like Shane Coburn, Mike Johnson or Jon Ortiz giving praise to one’s career, you already know it is going to be interesting.

This might or might not be the last part of the Billy O’Neill Story here on Be-Mag, and I can honestly say that it has been a pleasure working on this feature. Billy O’Neill is one of blading’s greatest and through this whole feature, we would like to thank him once again for everything he has done for blading.

Thank you Billy, keep on shredding.

Brian Bina (Haitian Magazine): “The first time I really got to experience Bill (and his genius), was that day at Staples. I’m not sure how many times I’ve told the story, it’s a memory that is so burnt in my mind.

It was the first time I got to see true professionalism. I feel as if it isn’t even a story of rollerblading. I feel that it’s a story of the quest for nirvana. He wasn’t rollerblading, he was meditating. He was so unbelievably focused, and in his mind, it was already done. His energy was so heavy that day. He visualized a third dimensional concept, took full control of the energy, and manufactured it into reality. His aura was shining bright that day. 9, or 10 beers deep.

Almost like Jesus walking on water, except it was Bill, and he was “rollerblading”.

Adam Johnson (friend, videographer): “One word comes to mind immediately when thinking of Billy O’Neill, RESPECT.
Billy commands respect, not to be confused with demanding respect, but commanding respect comes from actions, words, and the man himself. Billy might disagree with you, not like you, hate you, love you, or be indifferent, but one thing I’ve always noticed over the years is that he gives respect where it is due, and receives it in return. You’d be hard pressed to find another man in skating, or in the World, who has the balls to tell it how it is, lay it on the table, and back up his words and actions with a fiery passion.” Mike Johnson (long time friend and teammate): “Growing up skating with Billy has been one of the best life experiences one could have. Not only did I have someone to challenge me with skating, pushing me further, I’ve always had a brother to talk to about life and many issues outside of skating. He’s never quick to judge anyone, and always had the ability to see the big picture and make great judgments.

When we were younger skating in NYC, every borough in NYC had there little cliques back in the day, but me and Billy decided to create our own clique! The team members were “Fish and Murda” hence the name F.A.M haha and I remember us playing S.K.A.T.E with each other every day to push ourselves to our limits. I guess it payed off because after skating with all our friends in NYC and growing up with them, at the end everyone has their own journey. But there was one trip I went on in Russia and I was sitting in a restaurant and the next thing I know Billy came and sat right next to me! And it was so crazy because I didn’t know he was going to be there and neither did he know I was. But for us to be the only New Yorkers that grew up together and made it all the way to Russia because of skating… We both looked at each other and I can tell both of us just remembered our whole timelime, from skating through the streets of NYC throwing garbage in the air, fucking with people in the streets to now skating for a living in a different country.
To finish this up, Billy is one of the realest dudes I’ve ever met and will continue to be. I hope to have him in my life forever, he constantly makes people smile and feel great about themselves and I can’t wait to see where life takes him.”

Shane Coburn (Mindgame): “Telling you how good Billy is at blading is like telling you Slash really knows how to shred an axe. (‘Slash’ was a member of the 90’s band Guns & Roses, ‘shred’ referred to a guitarist’s playing proficiency, and an ‘axe’…the point is, for anyone who’s even seen a single Fish trick, his exceptional athleticism and technical prowess are immediately evident. Watch a short sequence and, no matter how uninitiated one may be, Billy’s intricate style, exuding both authority and subtlety, tells you you’re watching a master.

But what a lot of people who’ve never had the fortune of meeting him don’t know is that Billy’s just about as cool as they come. Intelligent, passionate, conscientious, and self-motivated, Fish is as pro at life as he is on wheels. Though we only worked together a short time, collaborating with Billy is one of things I miss most about my time in the industry. And now that he’s retired, I’m surely going to miss happening upon one of his jaw-dropping tricks or well-crafted sections online. But if Billy’s proven anything to us time and time again, it’s that his best is always yet to come. I’m excited for him and for whatever’s next…

Austin Paz (long time friend and videographer): “It’s so easy to write a whole book on Billy, which makes it really tough just to sum him up in a few lines. You all know about his ridiculous skating, so I’d like to touch more on what kind of person he is. Fish is one determined mother fucker. He’s a person who’s talent has no end. He always finds a way to wiggle out of a sticky situation, but when it comes down to it, he’ll take a bullet for any of his friends. Billy’s most noticeable characteristic is that he is never the same person as he was the year before, which makes him a well rounded and open minded individual. After Billy was done leaving our whole industry “in awe”, he strived to leave outsiders eyes feeling the same adrenaline, and that’s exactly the type of person he is. Always raising the bar and always fighting for what he loves. Like “Young Gunz”, he can’t stop won’t stop.

I’m not just saying this as a friend or someone who knows him really well, but Billy is one of the best role models in the history of our industry. He did whatever it took to be able to travel the world and be one of the top bladers EVER. I’ve seen him take on countless random jobs over the years to pay the bills between tours. He has tons of knowledge to drop on everyone from groms to pros, and as you can tell from his first part of The Billy O’Neill Story, he’s not afraid to share any of it. Even though he is retired from being a professional, his blading hasn’t changed at all, and he still always wants to win in SKATE ever since I beat him that one time when I was 15, ha.

Billy is the real deal, inside and outside of blading. I’m not sure where he’s going to end up in life, I’m not even sure he knows, but wherever it is, he’s going to fuckin kill it. Over the years, I’ve heard him say things like, “If I left the game today, at least I have a pro wheel, a frame, and a couple of sections to show for it”, but now he can say that he ran the game and has become an inspiration and a role model to kids all over the world.” Chris Dafick (friend, roommate, road buddy): “Bill is a shark out of water. Dude is not afraid to speak his mind, or anything really for that matter. A solid human and an even better pal.
I have some of the wildest tales of Ol’ Bill but it would take a couple beers to get that kind of information out of me. I could tell you about the time that we rode in the back of a pick up truck in the rain from Orlando to Jacksonville drinking beers out of slurpee cups to pass the time away, or the time we took a trip and saw Electric Wizard and The Rolling Stones in the same afternoon. Oh, and how could I forget the night that we met Pinky the porn star, oh yeah and what about the time that we got caught up in the middle of a riot in Berlin, Casa De Shredweiser, the countless concerts, talks, trips, ticks, blades, beers, and miles that we put under our feet… But we just don’t have the time.” Marc Moreno (friend, road buddy, teammate): “If I had to pick up a character to describe him it would be Robin Hood.”

Jon Ortiz (blading legend, NY hero, friend) “Billy O’Neill… What can I say about the kid, he’s my pal. I’ve watched him grow up over the years and I’ve seen his skating develop into one of the rawest, most unfiltered styles in the history of blading. I can go on and speak on the influence of his ninja skills, but I’m sure you’re all fully aware of that already. Instead I’d rather briefly mention about how I’m proud to call him a homie.

Although we have slightly different walks of life, we both were raised and come from the streets of NYC and it’s something that bonds us personally as brothers. We both started skating in similar situations, with not much in our pockets and a lot of trouble to get into. Before grinding, me and my broke ass friends would go skating and steal from bodegas and department stores, not for fun but for survival. As time passed and I was able to turn pro and travel the world, I saw the younger generation NYC cats like Fish and Dustin Halleran doing the same thing while having fun skating, it’s just simple “trying to get by and survive”. With the ninja skills he has, he was able to then turn pro, travel the world and open his eyes to the larger scope of the planet. It’s been cool watching my boy grow up and learn.

Many people may not know this, but Fish has personally grown more in the past 2 or 3 years than he has in his entire life. I can attribute that to him retrospectively taking in his blading career and assimilating all the lessons and mistakes he has experienced thus far. There really is no greater teacher than the tribulations of your life. Every time we chill over beers lately, we have great conversations about all kinds of shit the earlier versions of us would have made fun of on the spot. From politics to music to spirituality, he expresses the opinions of a well traveled, fully aware grown ass man, and I’m proud of him big time.

I can reminisce with other past stories of the kid, but he isn’t dead yet and frankly, we’re probably going out for beers tonight and creating more memories. Honestly I can’t imagine where he is going in life, especially with the sky being the limit. But I’ll be there cheering him on with a beer in one hand, and my fist raised up in the other.