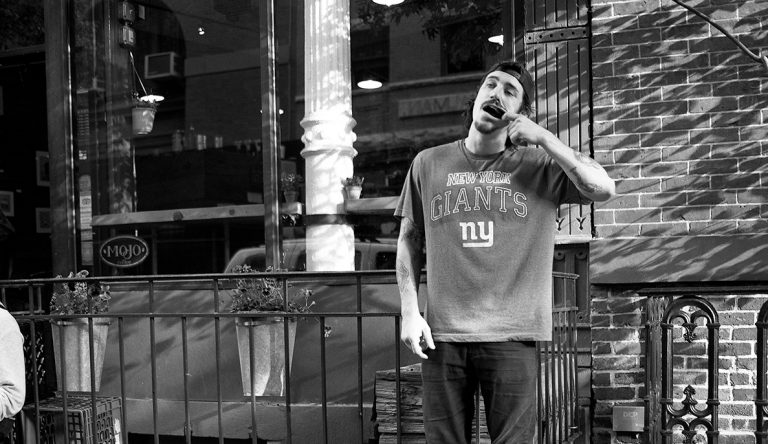 The talent of a great blader doesn’t only show in the way they skate, but also in the way they present their blading to the world. Real skills often shine through the screen, and that is the reason why we decided to focus on his many video sections in the second part of our in-depth interview with Billy O’Neill. In collaboration with Blade Archive, we asked Fish to share his memories and experience of filming as many as 13 sections for actual VHS and DVD productions, which were all uploaded in optimum quality for this specific occasion. As often with Billy, it quickly turned into a lesson of professionalism, and a prime example of how dedication and hard work can leave an everlasting mark in the history of blading.

So now that you have read the words of the man in the first part of this feature, in this second episode we will let the blading do the talking. All you have to do now is press play, and learn from one of the very best.

Live From New York – 2000
This was my first part ever, and I got to share it with one of my best friends, Mike Johnson. At the time, none of us knew we were filming for a video, we were just skating ’round, spot to spot, getting tricks as homies and Billy Schon just filmed it all. The purest time, in my eyes. That video was the first sections for a lot us and it motivated Daily Bread magazine to take a trip to NYC to make its first ever New York issue.
http://youtu.be/aK5hU7yv4Hs

NYC ONE – 2002
All NY video, all NY skaters, all NY music. Austin Paz’s first part, I believe. My part wasn’t too good in this video, but my style started getting a little better around here.
http://youtu.be/vl4FKsPgUDg

MONX – 2003
Kennan Scott is a dear friend and skating for his company was awesome. I was flown out to SF and put to work, with just under two weeks to film this part. Kennan and V took me to big ass gaps, drop rails and kink ledges.. Nothing chill, haha. Fun trip. Highlight: landed the famous Clipper gap in SF (although the photograph used was a non grabbed failed attempt as opposed to the one I landed, so the photo looks like shit, but the clip is good).
http://youtu.be/ingjG0K8Cok

Closer – 2003
I especially don’t like my skating in this. I was skating 57s flat on Fiziks frames, so there are some good gaps, but all my tricks look dorky and so does my peanut head haircut at the time.
http://youtu.be/TEpfA4JRqVY

Maintain – 2003
Another release from Nature Skate video. Skated to some crappy rock song but there are some moves I’m proud of in here. Drop rails, kink rails, gaps and true spins.
http://youtu.be/gzS8Z-BjXsY

Freestyle Rolling – 2004
The B Unique days were great. A real promising time for blading, in my opinion. Also, one of the most efficient companies business-wise and the owners were just some teens from Manhattan. Worked with the Kelsos a lot on this, spent a lot of time in Philly. These times spent with the Kelsos is probably what led to the inception of the Truth series.
http://youtu.be/Ei58_tYJd9c

Fiziks video – 2004
ATL homies! But yeah, I filmed my part in Boston with the Nature dudes and I had a really lame song, but I did a big 540. Dre’s part was sick in this video and so was Julian’s.
http://youtu.be/oFA6EQAInr4

Ego – 2005
Started filming this one after a 2 week RFCC tour and a Hoedown competition. When I started filming this, all the pros (Murda, Dre, Aragon, mainly) had 60+ clips each and I had 2 1/2 weeks to film something that could stand next to theirs with a start of 0. So we went to ATL and then Kansas, skating everyday, under one of the best skate directors ever, Adam Johnson. Aragon and Brent were around for most of it and it was just intense. Hammers everyday. Fun fact: did the largest gap to rail I had ever done and the camera didn’t film it, so I had to do it again, where we got 2 angles, a fish eye and an immaculate long shot with full run up and all. One of my fav clips ever… Then the long angle got filmed over, haha. I wanted to do it again a third time, but Adam wouldn’t let me.
http://youtu.be/aitU0FZwVzk

Accidental Machines – 2006
I was fucking juiced to be on Mindgame. I skated hard for this part, but when it came out, I was honestly a little disappointed. Some of my best clips were in the Outro part and the Intro, so I felt like it took away from my part. Years later, I began to like it more. I was really picky then. Now, I regard it as one of my favorites and one of my proudest achievements.
http://youtu.be/KtMFYOAhjgk

The Truth – 2007
After having contributed so heavily to the B Unique projects, the Kelsos and Austin Paz wanted to do their own, hence the Truth. Was a great one to work on, as we are all pals and passionate about presenting the craft properly. A lot of Northeast in this video. Chill vibes.
http://youtu.be/mmbtFvElifQ

The Truth 2 – 2009
This was the first part I filmed after I got hit by a car in Spain. It was a very long and frustrating recovery. When I first started skating again, my ankles would be so sore, I wouldn’t be able to skate for days afterward. The boys actually put the project on hold until I could film a full part, thanks boys! I had gone through a lot of changes during the era when I didn’t skate, specifically in how I dressed. Just wasn’t hangin with many skaters during that time, so I wasn’t dressing like one. Just happened naturally. In regard to the skating, I was really happy with how the part came out, especially the last few moves.
http://youtu.be/SFouXyb6tIU

Charging – 2011
Got some cool moves on this one, but nothing above and beyond. A chill part with some good homies. Got stuck in the “no clip zone” in California for a big part of this tour, but somehow managed to get a full part. Surfing vans on the coast. Epic times.
http://youtu.be/gZKLTr1WJMQ

Stay tuned for part 3 in the coming weeks and check out the first part right here:
be-mag.com/article/the-billy-oneill-story-pt-1