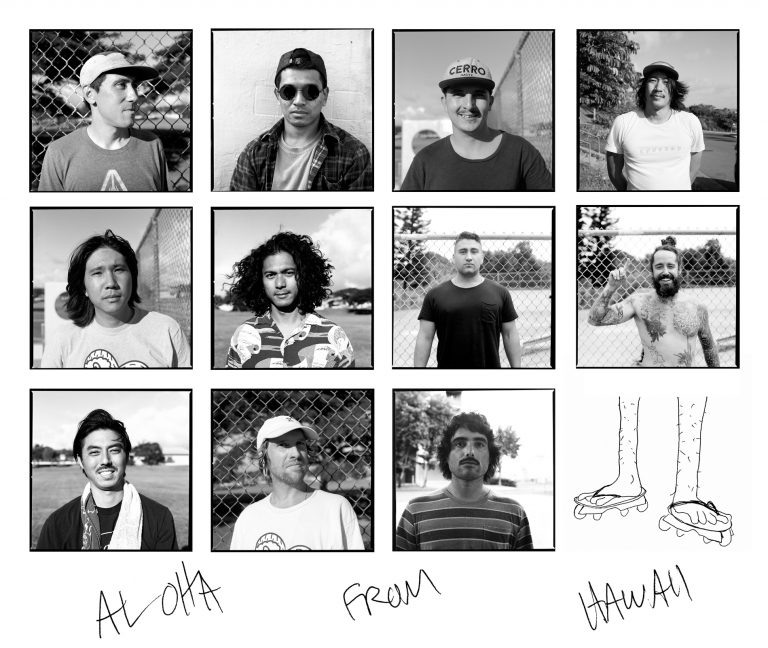 Oahu has a great history of skating all the way back to the 90s.  Multiple crews from Wahiawa, Pearl City, Salt Lake, Kalihi, Honolulu, Kailua, Waipahu, and Maui would descend on downtown Honolulu to skate street every weekend.  I would say on any given weekend you would see about 20-30 skaters seasoning Mililani mall ledges or the Court House six stair. In the early to mid 90s, Chris Edwards held a skate camp on Oahu which was also around the same time Arlo Eisenberg was in Maui. Maui’s Innovation Skate Shop brought down T-Bone Films and TJ Webber.

Hawai’i has been featured in VG6 with Bob Lewis and Pat Lennon.  VG7, Aaron Feinberg and Billy Prislin visted Maui and Oahu to get clips for profiles sections. Michael Kini produced the VG12 Battle My Crew edit for Hawai’i. Kini is also responsible for my first clip in a skate video (end credits to Millennium).  Kini also went on the USD tour and spent some time filming with the Future Prospect Crew. The last sections we saw was from VG 15 Battle My Crew 2.  After this video the Hawai’i scene started its decline.

We saw only a handful of bladers on Oahu. Thumper Nagasako was in Maui and was skating in the X-games Pro Vert in 2002. He was ranked #1 in America and #4 in the world. Around 2003-2013, I started the Hawai’i Real Street Competition based on Oahu.  Big shout-outs to Razors and Roller Warehouse for always supporting our events.  The Razors crew visited Oahu in 2018 during the filming for KFC4 Generic Tour Video.  Most recently the boys from the Jump Street Podcast along with JP Primiano from ButterTV visited. Also, Sean Keane and his crew have been frequenting the islands almost yearly.

That is enough history, and I might’ve got a few things wrong.  Let’s hear from some of the rippers.

“In contrast to Maui, Oahu’s blade crew is extremely healthy with a lot of rippers! Every time I visit, I am thankful for the Aloha Blade Crew Family.  I have been skating with many of those guys for 20 plus years.  I’ve actually lived on Oahu several times just so I would have a crew to skate with.”

Bought a pair of Sways in 2015 because they were cheap, and I was curious if I could still do it.  I tried a few of the parks but didn’t have that much fun.  Then the pandemic hit, and I was living in Waikiki, so I stated skating all the spots that were closed.  Skating these new spots invigorated that old passion for rollerblading.  I started watching videos and noticed (Jon) Julio and Randy (Spizer), who are around my age, still skating and looking fluid.  The I found the Aloha Blade Crew on IG and have been trying to skate as much as I can ever since.

I’ve lived on Oahu my entire life. The first time I went to a skatepark, I think I brought a skateboard, but when I got there, I remember my attention was immediately drawn to the rollerbladers there (most likely Akari Ihara, Bronson Range, and some of the other guys) airing over big gaps and grinding ledges, rather than the skateboarders attempting kickflips on the flat ground. I remember wanting to rollerblade after that. I also remember my dad telling me about a pro rollerblader on Maui named Thumper Nagasako, who he saw on the news. Being younger than all of the Hawai’i rollerbladers at the time, I really looked up to them and I saw them as a tight-knit group of friends. It wasn’t until after I graduated from college, that I really started skating more and hanging out with other local bladers. In my experience, these rollerbladers have always been a very welcoming and supportive group of friends and I always wanted to perpetuate that to new bladers, bladers moving here, or even just visiting.

I moved to Hawai‘i in 96′ and started skating in 98′.  I’ve been consistently skating with the crew since 03′. Because Hawai‘i is rightfully dominated by surfing and skateboarding, the bladers here are evermore so tightly-knit. It is safe to say we consider each other as ohana (family). Hawai’i is a mixing pot of styles and personality.  Today, the Aloha Blade Crew has been growing.  Some of the skaters that have really impacted our scene are: Dan Lee originally from Seattle and Jeffy from Colorado.   Having these two guys support the scene has been a breath of fresh air.

Coming from the Seattle area, which also has an incredible skating scene, I always thought it would take a truly special place and skating scene to get me to want to leave Seattle. After trips to Hawai’i in 2008 and 2011, I knew Hawai’i was that special place. Some circumstances in life changed for me in 2011, setting up a perfect opportunity to make a major change in life. So, I moved over to Oahu at the end of 2011 and have been here ever since!  2008 was the first year that I met any of the Hawai’i skaters. I first linked up with Akari via Facebook on a vacation and he took me out to a few sessions while I was here. From the very first session I could tell it was a different vibe out here, different in a good way. The skaters in Hawai’i were exactly that but on another level. As soon as I got here, I was instantly treated like family. I’ll always be thankful for how welcoming everyone here was and continues to be.

It’s hard for me to explain how fortunate I feel to rollerblade in Hawai’i with the company I do.  I was inspired to pick it back up after a good 7-8 year break when I moved from Colorado to Oahu, and it’s how I have met all my closest friends in both places.  Hawai’i’s rollerblade scene is unique though, warm and welcoming.  Everyone who gets the chance to skate here will always come back sooner then later.  The future and beyond.  Just this past year there has been a resurgence of rollerbladers.  We have dad rollerbladers with they’re kids and some new entry level guys and girls.  The Hawai’i skate scene is looking healthy and strong.  I myself enjoy seeing the youth pumping the bowls with a huge smile.  Watching these kids reminds me why I love rollerblading so much and keep on doing it.

From the very first session I could tell it was a different vibe out here, different in a good way.- Dan Lee

Hawai’i’s rollerblade scene is unique though, warm and welcoming.  Everyone who gets the chance to skate here will always come back sooner then later.- Jeffy Potter

Keep an eye out for Jeffy Potter’s “Hot In The Shade Tour” and Akari Ihara‘s “Session Da Park”.  If you are traveling to Hawai’i hit up the Aloha Blade Crew on IG at @alohabladecrew for info on their weekly meets, Friday Night Skates and the Sunday Sessions.