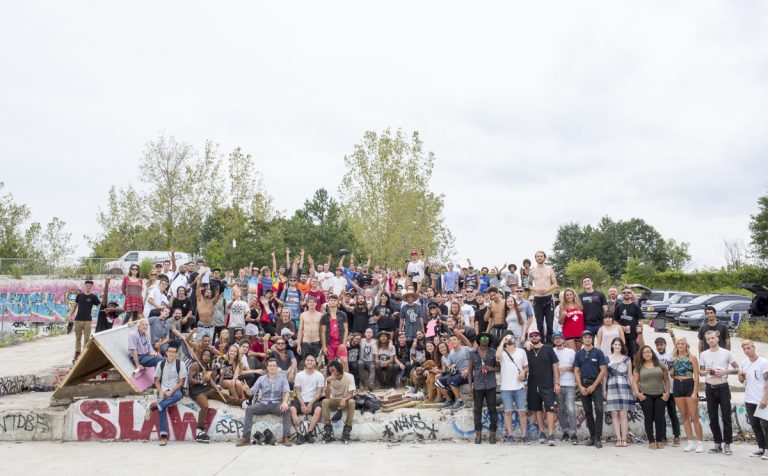 A-Town Stomp: the sixth one. The sky was as grey as a waterlogged roof under a burst pipe. It sagged and leaked, but held strong. The cloud coverage provided protection from the summer sun. Spot one:
Up ledge to flat ledge on the left side, sandwiched between a concrete roof and a concrete drainage ditch, ending at shoulder height, with a jankity concrete transition.

Immediately upon arrival, Joey Chase and Adam Bazydlo climbed the roof and gapped into the drainage ditch. Adam landed it first. Joey stepped it up with a mighty 360. Slinks, Sizemore, and Sir Dustin the Brave left their wheel marks on the roof and the ditch with style, precision, and mushroom respectively, demonstrating the versatility and imagination we admire in contemporary blading.

Dopest trick on the ledge right to left:
Ao fish from the transition – Sammy Chase

No police and no hassle. Spot 2:
The perfect down rail. 12 stairs. No dick. Mellow. Located in a neighborhood dog park. We received reports of a blonde woman, possibly a mother, definitely on her cell phone, looking confused and pointing in our general direction. Upon invitation, she obliged to bring her kids to see the circus. They were ecstatic. She did not call the police. We got a full session.

My favorite trick of the session:
The most casual of three-sixty sweat-stances in the history of casual 360 sweat-stances – Chris Smith.

The clouds came back.

Spot 3:
The arena. Set in a 1990’s post apocalyptic cult film. Complete with a rust, graffiti and hammers three-tiered system.

Tier One:
(1) Blind gap over a thigh-high wall around a cesspool to a steep, square, down rail, affixed to the ground by cinderblocks and hope.

Tier Two:
(1) Pole jam to down ramp with a ten foot drop on the right side.
(1) Gap to floating platform.
(1) Twelve-foot diamond rail to five-foot drop.

The mist moistened some of the less porous obstacles, but the slippery box top was outweighed by the benefits of heat relief. Ten minutes into our session it was gone. Adam Bazydlo did the most tricks on all the obstacles and the not-obstacles. David Sizemore skated classic David Sizemore lines, going buck with precision and grace. Chris Smith continued to impress with his style and creativity. Eric Michael true fished the cheese wedge 23 times. Jarrod Banning 540’d the trash pile. Joey torqued the tier-one death rail. Phillip back torqued the cheese and dropped to true acid on the cheese wall. Montre flew. J-bah swagged.

And at the end of the day no one got seriously injured. No one went to jail. No one committed infidelity to our knowledge. People were sore. We got rowdy. Reaper broke the shelf off the wall above the bed.

Use that key chain and that condom.

In an effort to legitimize our operation this year, we kept all the money exchanged for our seeds, cancelled regular trade transactions, and requested that the community fund the event. I feel it necessary to thank those involved, because they are monetarily responsible for our great Weekend.

See you Next Year,
Brian Starnes