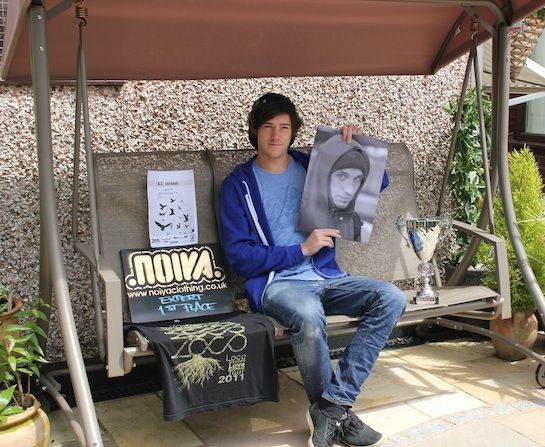 You’ve recently won quite a few contests, what prompted you to decide to enter into these events?

Well I’m lucky enough to be able to travel and see friends courtesy of my sponsors. Most events I go to I don’t always think before I enter that I’m going to try and win, I skate mainly because I’m in a different city with really good friends I haven’t seen for time! The vibes is right!

Lots of “core” street skaters look down on park skating or contest skating as a bad thing.  Why do you think that contest skating has gotten such a bad rap in the past few years?

I think a lot of people don’t like contest because whoever wins is “the best” no body likes being judged, also I think it’s easy to stand watching a contest and criticize, when it’s in your 1 minute run then it makes skating really hard, you normally get two runs or a jam, so beggars can’t be choosers with tricks!

Ever since blading’s exit from the X Games, it seems like there has been less and less exposure to a mass audience. With the recent revival of inline at Asian X, there is now talk of inline being re-introduced back into other world X Games stops (Brazil, Spain). Would you support inline going back? If so, why?

If x games are happening again and my friends can benefit and make a nice pay check for the sick talent, then I’ll be right there with them! If ESPN makes a million times what I do in the contest, I’m not naive and understand how the world works its fine by me. I used to work in KFC haha. We should make the most of the exposure!


You seem like a very chill and relaxed person, but during contests you seem to turn into a different skater. I’ve seen you lace crazy hammers and super technical tricks. What is your mentality going into a contest and how do you prepare yourself?

I guess with contest my mentality does change a lot, all those people watching and the pressure makes me try a lot harder tricks than normal. That’s why it’s kinda hard to film with me. If there are two of us filming then it’s hard to get on a hype. I need my homies there to egg me on and shout tricks at me! I grew up skating with all my friends around sat down telling me tricks to do, and them laughing when I landed them, so I got used to showing off I guess.

FISE 2012 brought an inline only “slope style” course out this year. What did you think of the park setup? Do you believe that this is the best way to showcase inline back to the mass audience? If so, why? If not, what might be a better way to gain more spotlight for blading?

In the past, you won the biggest “real street” contest the IMYTA in Amsterdam. Tell us what you can remember about that experience.

Aw man I don’t know we’re to start. I remember everything haha, I remember Jon Julio telling me to smile as I ran up the steps to have another trick! But I was so focused that I forgot too! Even when I’d won I watch the edits of my face and I look so awkward, all the cameras and photo’s being taken I didn’t know what was going on, I remember not smoking during the day, until I sat next to Shima and he passed one around, I didn’t wanna smoke but it was Brain Shima’s spliff. I had to try it haha. I just remember everyone being super happy to talk to me, and that made me so fucking happy, big up to everyone I met that weekend. Was one I will never forget!!


Personally, I’m not a fan of the “spin to win” type of skating in contests. I don’t believe that the bigger rotation to grind type of skating gives a true representation of what is difficult on skates. However, some skaters disagree. What is your opinion on this situation?

I guess my honest answer on this one is I’m not really sure, I guess if you land all your tricks in your run, weather its spins or not, and you did more tricks than the other bladers. Then for sure you should win. I do spin quite a lot in contest, because I can’t do many flips, and it would be almost impossible to win a contest without doing spins as the competition is on such a high level. If you look at BMX for example, those guys are constantly pushing the limits with spins and flips, which appeals to the mass audience.

Skate competitions in the past were based on a rating structure: style, line, creativity and difficulty. These rating structures were based on single runs on a course, very similar to traditional sports like skiing/snowboarding. Now, skate contests are judged differently because of the changes in format i.e. jam format etc. How do you think the judging structures could change to make contest winners more appropriate? i.e. no/less controversy for contest winners

I guess take it back to the old school times, when contest were judged on style, creativity, consistency, and the odd hammer. Also switch tricks, no body seem to even notice these days if you bust a switch trick. I do like contest more when it’s in a 1 minute run, You really get noticed more when your under the spotlight everybody’s watching and one bail could take your shot at winning the whole thing, that way you can see who really is the most consistent.