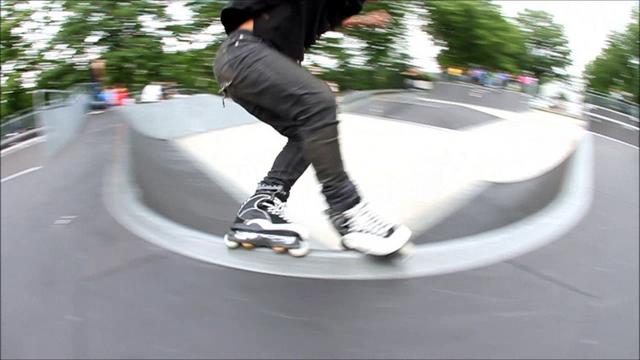 I created the “New Jersey Blading” group page on Facebook where everyone could connect with other bladers in the state to share pics, vids, stories, ideas and eventually plan sessions. The group was started on September 10th, 2009 and the first comment I posted on the group page read, “Heyyy everyone, this is a group created and dedicated to bladers strictly in New Jersey. I say strictly because I would really like for all skaters in Jersey to come together, unite, and roll. You can upload any video, pictures or links as long as it all relates to skaters from Jersey. Lets get this ish rolling!”

Since the group page was started in 2009, we’ve had multiple sessions all over the state with great results and turnouts. We’ve had great sessions in streets of Jersey City, Shield’s Skatepark, H-Town Skatepark, Princeton Skatepark, and just recently Woodbridge Skatepark. I think everyone who comes to these sessions will agree that there is definitely a sense of unity in the state now. I’m still meeting new skaters from New Jersey at these sessions. After each session, the feedback is always positive with everyone anticipating and asking when the next one will be. I think the group will only continue to grow and become more unified as we push forward into the future!

Even with the possibility of raining (which it didn’t), a lot of people came out to shred. Luckily, the skatepark has a live webcam and we were able to see if there were any puddles on the ramps before heading out there. It was definitely a great turnout! Lots of hammers went down. There were between 25 – 30 bladers there throughout the day. Thanks to Gee Lee for the group shot! You can check out more of Gee’s photos on the New Jersey Blading group page on Facebook.

A lot of people came out from all different parts of the state. We definitely dominated the park the whole day. For once we were the majority and not the minority. It was nice to see some boarders, bikers and scooters leaving the park because everything was being skated by us. There were multiple filmers and photographers there throughout the session like Gee Lee, Sam DeAngelis, Osbel Velez, Chris Kolodziej and James Szkola.

A special thanks to SpoildBratt Sk8Shop for giving out some DVDs and shirts. Thanks again to everyone who came out and made this happen! I definitely look forward to the next session!