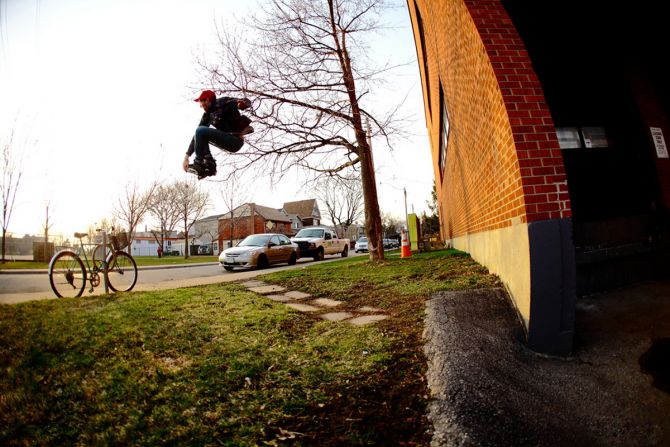 For me, blading is all about experiencing and skating as many new and different spots as possible. I find it hard to just want to skate ledges. The majority of my high school years were spent developing a trick vocabulary and for that reason I now feel obligated to capture concrete evidence of my progression over the last twelve years. When I am old I would like to look back and vividly remember all of these amazing experiences. Capturing and reliving moments from the past, in my opinion, is best reflected and understood through the expression of photography. I am very proud of these memories captured from the past year and would like to thank all my amazing friends for helping make it all possible.

These images are a reflection on my vision of street skating. I believe the best street skaters out there also have the best imaginations, allowing them to create their art. Handrails are everywhere, but it is not often that they are found in the most visually stunning settings. With that in mind, I’ve tried to skate a variety of unique spots this year, always pushing myself hard, even when I am not feeling it.

I would like to thank Be-Mag for giving me the opportunity to publish this feature, as well as Remz and Shop-Task for making me want to continue skating hard even as I grow older. For those who don’t know, I love to skate hard and fast, do wall rides, and am currently in training for the X-Games.

This picture was taken during a session that was going nowhere with Dan Lefebre. After basically giving up on skating for the day I told Dan I might know a spot, but I wasn’t promising anything. Dan agreed to go and upon seeing the concrete kicker to grass gap he promised me dinner at McDonald’s if I could grab a nice shot. Twenty minutes later I was out of breath and ready to grab a junior chicken with buffalo chicken sauce.

We had originally found this epic skate spot during the winter and were unable to skate it the way it was meant to be skated, due to large puddles of water and cold temperatures. Myself, Aaron Wheat, and Dan Lefebre all vowed to make another trip out to this epic spot when the weather was more suitable. As time passed the weather began to get nicer and nicer and eventually we couldn’t resist trying to skate the coolest natural quarter pipe spot any of us had ever seen. The day we sessioned this spot we made sure to go prepared. Our car was packed with shovels, brooms, rub bricks, wax, and most importantly, water and suntan lotion. We decided that although the part of the quarter pipe that overhung the dam run off was the most dangerous part of the dam to skate, it was also the most photogenic. After correctly preparing the quarter pipe an amazing session took place and in that time I managed to grab what is probably the best alley-oop fish I will ever do.

This picture was taken in Amsterdam after skating the Olympia Skatepark. Aaron and I had biked from our hostel to the park and after finishing up didn’t know where or what to do next. Some of the locals suggested we skate a ledge spot only a few minutes away. We ended up taking their advice and followed a group of young skaters across the city and over a bridge to a set of ledges and this wall rail. After landing top acid a few times down this rail I knew I needed to get down to business and fish it. A few tries later Wheat snapped the photo and we were off on our bikes again to explore the city.

This pictures was taken no more than an hour after the Fishbrain on the wall shot. Aaron and I had been piecing our way back to the center of the city when we spotted this nice looking rail and set along the Harbor front. I convinced Aaron as we were biking that I could 180 the set for a picture fairly quick. Wheat being the guy he is rolled up to the spot, grabbed his camera, set up, and snapped the shot as soon as I was ready. After landing the gap we were greeted with applause by a group of local Amsterdam soccer fans as they walked toward the game.

I didn’t even know Dave Ghent took a picture of me doing this true top acid until he sent it to me after I had been hit by a car while biking to work. Seeing the picture definitely put me in a better mood, especially because it might be one of the only pictures I have on the infamous Elgin Mills ledges. When I was younger this was the go-to spot everyday after school for my friends and I. Now that I don’t live as close to the spot it’s always a treat to go back and skate the ledge or a small skatepark that is one parking lot over.

Bank-to-rail is a classic Toronto street spot that is every street-skaters dream. It is located in the back of a parking lot with banks all along the perimeter of the school. When I was younger, I had always wondered why people never skated the bank to flat rail. It turns out they must have realized that getting the speed to even warm up to the spot feels like an endurance training session. After just skating up to the spot a few times I knew I had already invested all my energy into the trick and that I wasn’t leaving exhausted without some sort of photographic evidence. Thanks to some great moral support on behalf of Wheat and Sushi I was able to land this Alley-oop top acid before passing out.

For the past few years my friends Dustin Watson and Ace Kieffer, who I met at Woodward over six years ago, drive up into Toronto to skate and experience what it was like to live in my dad’s basement. Fortunately for them, this year I moved into a great loft in Toronto that they called home for a good eleven or twelve days. While they were here the routine was always the same. I’d go to work from 9 until 1, bike back to my house to grab them, and go skating or explore the city on bikes. On this particular day we met up with our friend Bernty and skated the bike park by my house. In order to do this wall ride we had to move a bunch of the ramps around and make a run up with wood to even make it to the first ramp.

Soul Against Wall by Dustin Watson

From the moment I saw this spot I had to skate it. The only problem, the landing goes directly into a parking garage door that is only open Mondays through Fridays from 9:00 a.m. to 5:00 p.m. Luckily for me Dustin and Ace were running on my time and skating a spot at 3:00 p.m. was never an issue. Unfortunately, because I left my wax home we were almost unable to get the photo. With a little bit of coaching from Bernty and Ace I decided to just skate faster to make up for the lack of slipperiness. Everything ended up working out, I grinded off the end, cruised down into the parking garage, passed by the parking attendants booth, and we were on our way.

This shot was taken on Dustin and Ace’s first day in Toronto, which just so happened to also be Gay Pride day. I might have forgot to let them on this piece of information. They were both pretty shocked by the amount of men walking around in drag and groups of people walking around with rainbows painted on their faces. After struggling with Pride traffic we eventually found our way to the spot. We got out of the car, ate breakfast, and snapped this picture.

Wall-ride to Fakie by Dustin Watson

While Dustin and Ace were staying with me I had to pick something up at my mom’s house north of Toronto. This wall ride is across the street from her house and there are always planks of wood and crates sitting right beside it. I decided to take advantage of the situation and got to work building this ramp over the rail. Perhaps the hardest thing about this trick, other than the sketchy ramp I made, was the fact that the wall is actually made of stucco and every time I planted into it my feet would leave dents behind. I found that out during my first try and luckily got the money shot on my second.

Long story short, the owner of this building yelled at me for skating his roof while the patrons on the street cheered me on. I ended up doing a switch soul into the bank after a full day of work at Shop-Task.

After the above I took my skates off in an alley and was asked to take a picture with one of Toronto’s finest. He left me with a joke that explained how Smurfette doesn’t put out because all the Smurfs have blue balls. As you can imagine, he had a lot of wisdom to share.

Fun fact: this is the school where a majority of the high school scenes were filmed in Billy Madison. The first kink rail I ever completed also happened to be at this school. I remember skating the spot with Aaron McInnis and Andrew Boyle and we all spent the majority of day trying to top soul it. The best part of the day was when Andrew learned and landed switch top soul because the rail on the other side of the steps had a light post near it that you could run into. Years have passed and the rail has been removed since. Luckily, the bigger and more photogenic kink to sidewalk gap 100m west is still skateable.

Ace took this picture in my house during his stay here this past summer. It turned out really great. He’s a cool guy.