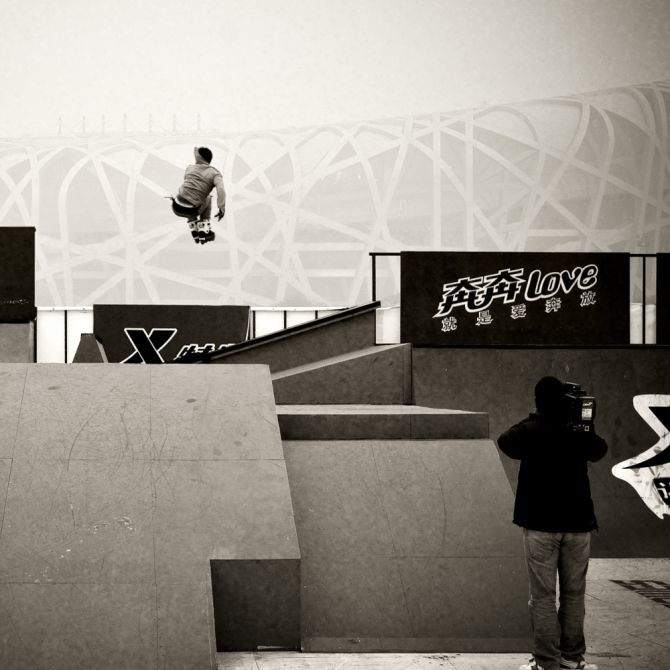 At 1pm the event started. There were 6 skaters who were involved in the best trick event with 3 tries to achieve your best score. Due to the fact that I placed first in the contest the day before I was the last skater to have my run. As I watched everyone’s runs I got a good idea about what I might need to do to get the best trick. Unlike this morning my legs were actually under me and I was feeling great, I knew what I wanted and in no time it was time for me to drop in. I started off with a trick I was unsure of which was a large 540 transfer from a quarter to another quarter pushed back about 5 feet with about a 15 foot gap. After I landed my first trick I decided that I would do a double grabbed 900 over the launch box and ended with a fakie misty 720. As the scores were read out I soon found out that I had won the best trick event!

As soon as best trick was over we headed out to a street skating event that was planned for all the local skaters of Beijing. We arrived at the best ledges in Beijing to see a crowd of about 40 skaters! As they warmed up for the contest we skated as well and had a good time interacting with all the friendly Beijing skaters. Twenty minutes later the contest started and Mathias, Alex, Stephan, and myself judged the ledge contest. After 6 rounds, with 4 skaters in each heat we had our top 3 skaters. Everyone was so excited about the contest and they reminded me of why I love rollerblading so much.

As the night came to an end I had one more obligation with the CX-Games which was going on the main stage after the band. After they asked me a few basic questions about skating and what I thought about the event things got interesting. In front of about 500 Chinese spectators I was asked to try my best at Chinese. The announcer told me what to say in Chinese and I tried my best to repeat what he said. Obviously I was totally off and the crowd was laughing, actually laughing hard. Even though some might be embarassed this is a moment that will stick with me for the rest of my life and was hilarious to me at the same time. I couldn’t have asked for a better weekend with some of the most amazing people ever!

Tomorrow will be my last live-update before I head back to California. We are heading to the great wall and there is sure to be some amazing pictures so please check back!