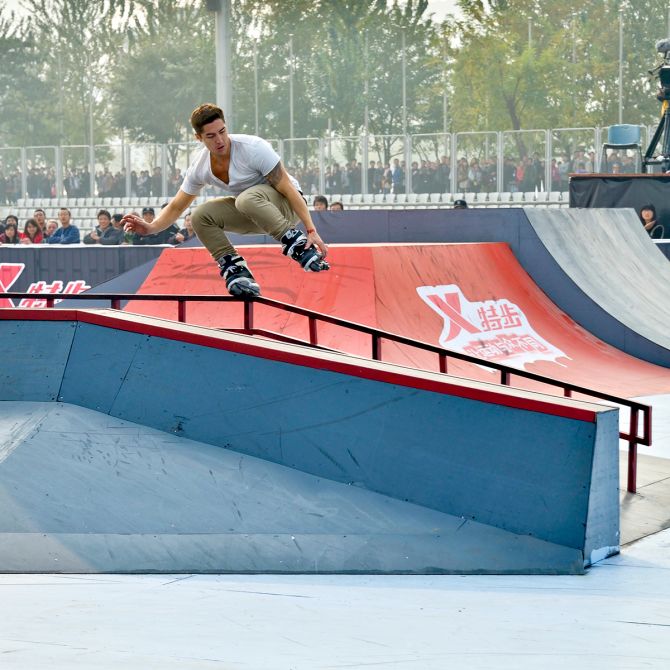 Two hours later and 15 minutes before the contest we saw Franky and Mathias walking up with Mathias in a neck brace. Though he would not be able to skate finals with us he would be better in a short amount of time and it wasn’t a serious injury which is always good to hear. As the BMX contest was coming to an end we were informed by the CX staff that we would only have 1 minute warm up time due to the fact they were running behind and due to the fact that the contest was on national TV it could not be pushed back. As the BMX guys headed off the course I literally rolled down the start ramp, did one grind then they said it was time for the contest to start.

Due to the fact that yesterday I pre-qualified in 1st I was the last skater in finals. In no time it was my turn to drop in, though my legs were feeling the pain I put together my whole run with no flaws. In my second run I completed the whole thing with no falls but this time it didn’t have the amplitude that I had on the first. Everyone skated good and as the results were called out I soon found out that I had won the contest. We were hurried over to the podium where awards were given out for the BMX and Inline contest. After taking pictures and doing interviews I could now take a deep breath and smile.

Today couldn’t have gone better for me with one of the best contest runs I’ve had in a couple years. Everyone else in the contest skating amazing with Killa Kai coming in 2nd place and Alex Burston coming in 3rd place. As we left the venue for the day everyone was in good spirits and was happy with the results of the contest. We all went out to eat some dinner and made our way back to the hotel. There is still one more event for rollerblading tomorrow which will be the best trick contest.