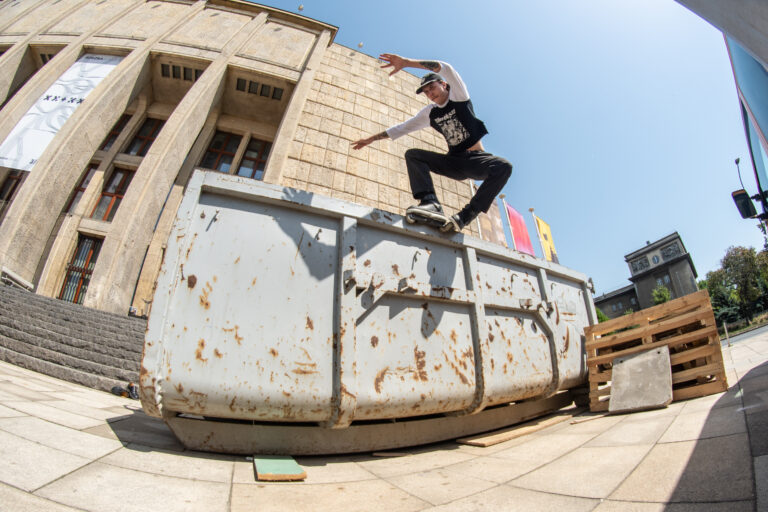 Poland has long been a hot spot for rising talent in the inline skating community and while some of the country’s best have come in and out of the limelight there is a new crop of rippers emerging that are carrying the torch for the next generation and making their presence known on a worldwide scale. One of those individuals is Seba Dzbik. Seba might be a new name for some of you out there, but he has been on fire for quite some time and has really grown into an ambassador for the sport within his home country and abroad. We had the opportunity to speak to Seba about his skating roots and inspirations and although we have just scratched the surface of his story, we know that we will be seeing much more of this young man in the future.

Kevin Little: Hey Seba! Thanks for taking the time to speak with us today. Tell us a little bit about yourself such as how old you are, where you are from and how long you’ve been skating for?

Seba Dżbik: Sure, my name is Seba Dżbik, I’m 24 years old and currently living in Cracow, Poland, where I moved about 1 1/2 years ago from my hometown Nysa. Nowadays I’m working as a part-time truck’s driver, so I still have plenty of time to explore new places and living in the city. My job looks like I have one-day routes around Poland, always leaving from Krakow and returning the same day. I drive all sorts of groceries and vegetables around the distribution centers of one of the stores in Poland.

I enjoy my work because no one is standing over me and doesn’t tell me what to do. In the meantime I listen to music, as well as crime and skate podcasts. My story with blading started when I was eleven. Analog photography and music are my second interests, I also enjoy spending my free time hiking in the mountains and walking on mountain trails.

KL: What was your first exposure to inline skating?

Seba: Well I remember that I had some usual fitness skates at home. At that time a skatepark was being built in my town, there was another one, but I had no idea of its existence so I waited until they finished building the new one. At that time I was riding around the city on regular roller skates. Sometimes on TV there were X-GAMES competitions on roller skates, so I watched them. I also watched some edits on the Internet, which gave me further excitement to go in this direction.

One day I removed the center wheels from the frames and tried some grinds. I tried some souls or frontsides and even succeeded. When they finished building a skatepark in Nysa, I met a local crew there who had been skating for a long time and they gave me some advice, what kind of skates to buy, etc., how to do some first tricks and that’s
how I stayed!

KL: What is your local skate scene like? Do you have a fairly large crew of skaters that you roll with?

Seba: Since I live in Krakow I’ve noticed that people here are divided into those who skate only at the skatepark and those who skate everywhere. Before I moved here ithe guys from the local scene: Mateusz Kowalski, Lukasz Mazur, Pawel Fijal were releasing fucking street videos every year. Such as The Crusher, Hard Drugs, Safe City, Sail City – you can definitely see them somewhere on the net. That always drove me to rollerblading and to this city: Krakow, because even when I was thirteen, fourteen years old I used to drop by here on vacation to skate.

Now there are about 10 skaters, but such active ones who always go out with you on the street are from 1-2 people. However I noticed that a lot of people skate in the winter at the indoor skatepark where there are weekly set-ups. This year from February to June Fabian Gaile came to Krakow, where it seems to me that for that moment conquered the local scene. I remember this time very well, because I missed such a vibe after the blade, you know, go have a beer, eat something in town and enjoy time together, discussing the blade industry.

It’s different than coming to the set-up and quickly wrapping it up and treating it like going to the gym or something similar. I’m glad I moved here, because it is a larger city, different perspectives and you can develop in terms of rollerblading and other activities. In comparison, there was a time in Nysa, where I still lived in my hometown, where I skated with skateboarders and people who ride BMX because no one was already skating there, in a sense it was interesting.

KL: Who or what has been your biggest influence in your skating style?

Seba: Honestly, I owe the biggest influence on my skating style to the Haitian crew, Shredweiser, and Thee Strange. I was inspired by them a lot, when they released something new I immediately watched it several times haha. It also opened me up to doing other things or listening to music like I listen to now. A big influence on my style was the fact that through rollerblading you can show your personality in a way through clothing or editing your video you can show others what kind of vibe you have by being yourself!

KL: Haitian, Thee Strange and Shredweiser made some of the best videos around and they made a huge impact on the blading community as a whole. Of their videos, which ones would you say are your personal favorites?

KL: As far as musical taste, what are your go-to jams to get you hyped for a skate session?

Seba: My taste in music is largely based on the genre of dark-wave, stoner rock, psychedelic rock and punk rock. I also like to go on a rave with a strong techno muse, which sometimes lasts as long as 12 hours haha. I also remain open to other music genres. But listing after my favorites would definitely be MC5 – Looking at you, Witchfinder General – Free Country, Can – Mother Sky, Sonic Youth – Teen Age Riot, Wand – Fire on the Mountain and much more. I’ve only listed 5 but these are usually songs from beloved rollerblading movies or sections and it gives me a lot of excitement on a skate session.

KL: I see you recently made the transition to skating on Mesmers, which fit you very well by the way, what made you want to switch it up?

Seba: Yeah yeah, I changed the skates to Mesmer. After watching the Mesmer Rising edit and seeing how strong the team is, I was stoked to the max. I wondered what the roll would be and found that I just had to have them. Plus it’s really cool to support a new brand by trying a pair of new skates. I just like the vibe they create in it and may they continue to grow! By the way, my first aggressive rollers were classic Thrones. Now I skate on Mesmers and don’t plan to change them…

KL: When you are not skating, you also dabble in 35mm photography. In this digital age, what was it about shooting 35mm that appealed to you?

Seba: Yes, I deal with it very amateurishly. I take my camera anywhere, whenever I go somewhere for a trip or to a concert. Someday I would like to learn how to develop photos by myself because it seems to be a very interesting and at the same time complicated process. The best thing about it is when you totally don’t remember what photos you took. Then you find out after you’ve done the scans, there’s a pleasant surprise or maybe the other way around that you didn’t capture the moment you wanted. But I so enjoy that kind of spontaneity in analog photos.

KL: Who are some of your favorite photographers?

Seba: For sure it will be Jeff Stockwell when it comes to photos. I guess I don’t have any more favorite photographers. But I really do like the photos my two friends are making: Radek Kojtych (@canis_latrans ) and Maciej Mastalerz (@doomridermedia). They post their art on instagrams, I totally recommend you to check it out.

KL: You recently announced that you are going to be partaking in the Burza Torden tour. Who all is going on tour with you?

Seba: YES! I am very stoked that again we can do something together with the guys and meet and just spend some time together! The last time we’ve seen each other and made something was in 2019 when releasing our video Burza Torden 3 years already so it’s about time! Now there will be five of us on the trip which means there will be a lot going on, in addition to Martin (Danning) and Levi (Van Rijn), Davy (Wouda) and Sjored (Peters) are coming. Guys, if you are seeing this, see you soon!

KL: How do you decide what cities to go to?

Seba: This will be a tour of Poland for ten days, starting from 1st of August. I’m sure we’ll stay in Krakow for a few days, then we’ll go to Katowice where we’ll also show our new merch, i.e. new t-shirts, etc., and where we’ll stay for an OFF Festival of alternative music. There’s a lot going on in Katowice in terms of rollerblading, so I think it’s a good place to visit on this tour.

Also I’m sure the guys want to visit Warsaw + some small villages because there we can find cool spots on the street. We have several days to make it happen, so I hope everything will work out, and most of all we will spend time together.

KL: If you had the chance to tour anywhere in the world for skating, where would you like to go?

Seba: It would definitely be the United States! I hope to go to the Blading Cup competition next year, because I’ve been thinking about a trip to the States for a while and hope to finally make it happen. Also, I would like to visit the country in terms of tourism, national parks in the states, Grand Canyon Colorado or rocky mountains. It has always impressed me, and to combine it with rollerblading would be really great.

KL: Did you have any people that you would like to thank for supporting you or your skating throughout the years?

Seba: Yes, sure. Mostly big thanks goes to my parents for their support. My sister who is there for me and helps me with various things. To the aforementioned team that was at my hometown skatepark from the beginning and to everyone who has supported me during that time! Many thanks to y’all who are reading this article, much love and peace.